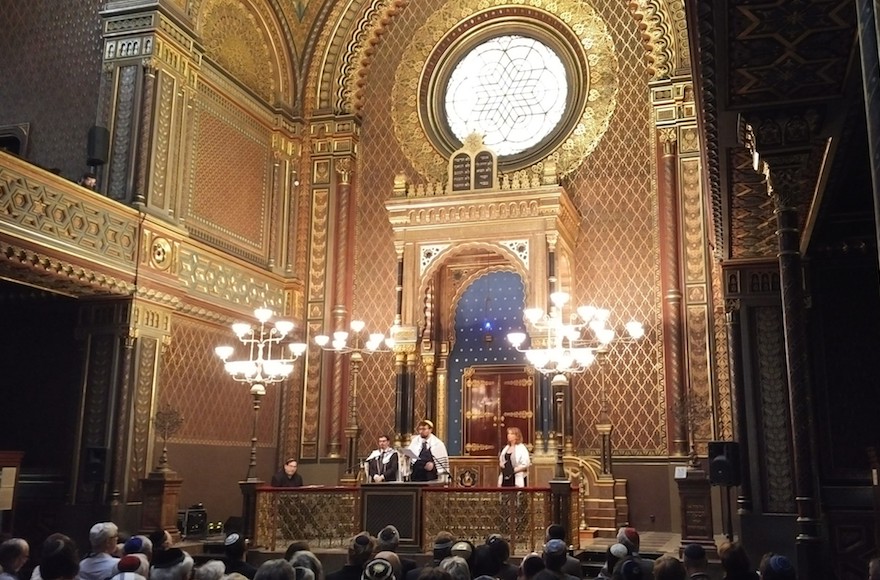 PRAGUE (JTA) — A new Torah scroll is being used in this historic city by one of its two Reform Jewish congregations to welcome the High Holidays and the series of solemn and joyous celebrations that conclude with, what else, Simchat Torah — the rejoicing of the Torah.

But it’s really not a new scroll at all.

Originally a Czech scroll, the Torah has spent the last several decades at a Reform synagogue in London. How it got there — and how it made its way back to Prague — points to the continuing rebuilding of Jewish life in the Czech Republic and the revival of traditions and culture that were lost in the Holocaust and under communism.

It’s unclear how and when the scroll made its way to the Hendon Reform Synagogue in the British capital. It wasn’t part of the Memorial Scrolls Trust, a Czech scrolls collection sold to Westminster Synagogue by the Czech communist government in 1964. Instead it was given to Hendon’s rabbi at the time, Arthur Katz, by a congregant in tribute to Katz’s heritage. Born in Prague and educated at a yeshiva in eastern Czechoslovakia, Katz served a community in Sobeslav when the Nazis invaded. He narrowly escaped to England in 1939.

After the Hendon Synagogue merged with the nearby Edgware Reform Synagogue, the newly formed congregation realized that there wasn’t enough space for all the scrolls. So Hendon’s current rabbi – Stephen Katz, son of Arthur Katz – contacted Rabbi Andrew Goldstein, rabbi emeritus of the Northwood & Pinner Liberal Synagogue in outerborough London. Goldstein said the younger Katz said he wanted it to go to the Czech Republic. The scroll was donated to the European Union for Progressive Judaism, or EUPJ.

Earlier this year, Goldstein brought it to Prague as a gift for ZLU, the Jewish Liberal Union.

ZLU’s new Torah scroll was welcomed April 28 at a ceremony at the Spanish Synagogue here, where the scroll was read for the first time in over 50 years in the country of its origin. The crowd gathered in its sanctuary hailed from over 25 countries, all participants of the EUPJ’s first-ever conference in the Czech Republic. They came for shacharit – a service that now is a rarity in the building, which before World War II was home to a thriving Reform Jewish congregation and today functions as a museum and event space.

There were so many worshippers for the service that the synagogue’s wooden pews – downstairs and upstairs – had to be augmented with folding chairs.

“I had to get the fire chief’s approval; there were probably about 470 people there,” said Jonathan Wootliff, EUPJ’s Executive Board member for the Czech Republic. “There’s never been that many people in that synagogue since before the war – the largest number for a service in living memory.”

Frantisek Fendrych, the ZLU chairman, said the scroll is being kept at the High Synagogue, where an Orthodox congregation meets, because it has proper security. The synagogue is safekeeping the scroll for ZLU until the Progressive synagogue has its own space — it meets now at temporary quarters in Prague’s Old Town.

For Goldstein, bringing the Torah to the Czech Republic was a natural continuation of his decades-long work dedicated to resurrecting Progressive — or, as it is known elsewhere, Reform or Liberal — Judaism in the country. The rabbi made his first trip to what was then Czechoslovakia in the early 1980s. Since then, and especially after the fall of communism, he has led services and presented lectures in nascent Czech and Slovak Reform communities and brought over groups from his and other congregations. 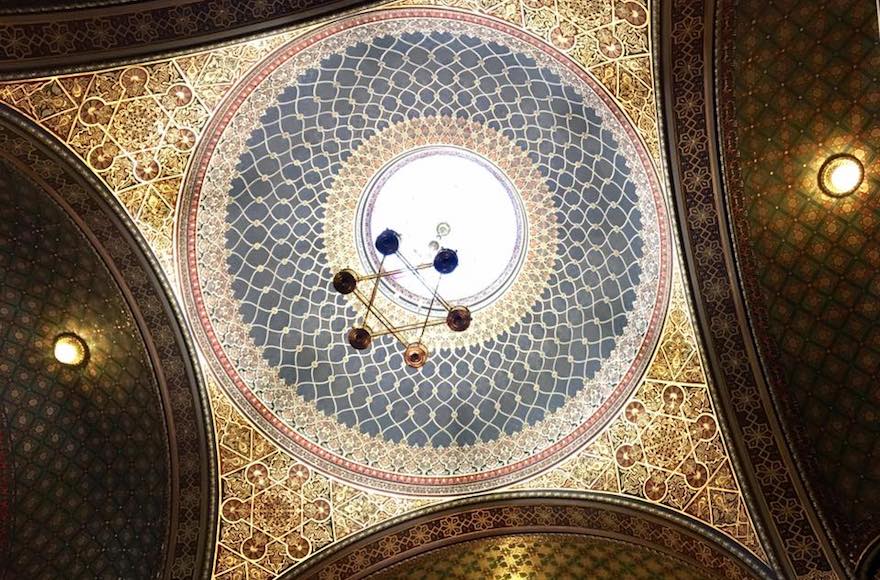 The ceiling of the Spanish Synagogue (Margarita Gokun Silver)

According to Tomas Kraus, the executive director of the Federation of Jewish Communities in the Czech Republic, there are about 15,000 people with a Jewish background in the country.

“Before the war we had 350,000 Jews [in the whole of Czechoslovakia] and in [the territory of] today’s Czech Republic 120,000,” Kraus said. “From the numbers you see the magnitude of the catastrophe here.”

Of all European countries, with the exception of Germany, the Holocaust lasted the longest in the Czech Republic. It began with the Munich agreement of 1938 when Nazi Germany annexed the Sudetenland of Czechoslovakia and ended several months after V-E Day — only after the Terezin camp was finally liberated following a typhoid epidemic.

The memory of what happened to the Czech Jews during the Holocaust has a strong influence on the identity of modern Czech Jewry.

“The Shoah [plays] a big role in the self-definition of what it means to be Jewish,” said David Maxa, a rabbinical student at the Abraham Geiger College of the University of Potsdam in Germany.

Maxa accepted an appointment to become the next Reform rabbi of the Czech Republic when he is ordained.

“One of my key missions is to make sure that this kind of heritage will, in the end, be positive — more than just mourning the past but also looking to the future,” he said.

Building strong, active communities is part of that future. Today there are 10 congregations in the Czech Republic; in addition to the two Progressive congregations, there is the Orthodox Prague   Jewish Community and several nondenominational congregations. ZLU, founded 18 years ago by three people – Fendrych, Martin Hron and Simona Sternova –  has since grown to a membership of about 150. Until now, ZLU did not have its own Torah.

For ZLU, as well as other Progressive Jews in the Czech Republic, the scroll’s return is highly symbolic.

“The Torah scroll is a great recognition and honor for us; it’s a new heart of our congregation,” Fendrych told JTA via email. “Our dream is to have standard Jewish life again – we are working to reach here in the near future a more democratic, pluralistic Jewish life for our children.”

The history of Jewish life in what is now the Czech Republic dates back hundreds of years. Prague has the oldest functioning synagogue in Europe: The Old New synagogue was built in 1270. The country boasts many known Jewish philosophers and scholars – among them Rabbi Jehuda Loew ben Bezalel, the 16th-century sage and mystic who figures in legends of the Golem, a mythical clay creature who extracts vengeance on the Jews’ enemies. And in the 19th century Czechia, then part of the Austro-Hungarian Empire, was one of the centers of Reform Judaism, born to modernize Jewish beliefs and practices.

Today the Reform movement is working to restore this traditional vitality of Czech Jewish life. Part of that work is reaching out to Jews who are not involved. \

“During communism, Jewish identity forming was highly stigmatized,” Maxa said. “We are trying to change this kind of perception and [build] an open synagogue community where people could come and see that Judaism can bring joy and meaning in daily lives to [those] who have lost connection to their Jewish roots.”

Sylvie Wittmann, one of the founders of Bejt Simcha, Prague’s other Reform congregation, echoes the sentiment.

The return of a Czech scroll and its restoration to its rightful place – a Czech Republic Jewish congregation – is part of that normality.