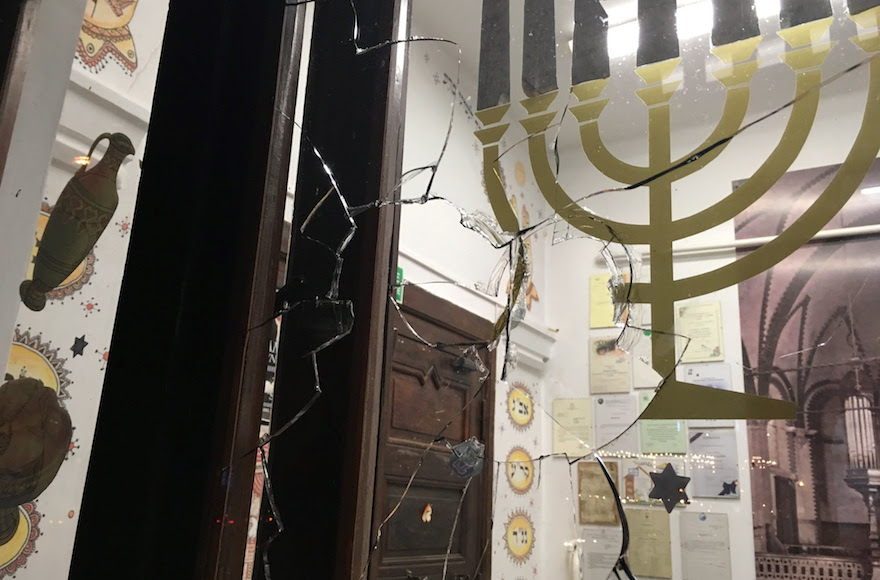 (JTA) — A rock was hurled into a synagogue in the Polish city of Gdansk on Yom Kippur, shattering the glass of one window while worshippers, including children, were inside.

No one was hurt in Wednesday’s incident at the New Synagogue on Wednesday during one of Judaism’s holiest days.

The perpetrator has been identified on camera and the police are said to be dealing with the attack as a matter of the highest urgency, the World Jewish Congress wrote in a statement in which it condemned the attack.

In his statement, Gdansk Mayor Adamowicz referenced his city’s recent past as the birthplace of the anti-communist trade union and said: “I categorically reject the behavior of the perpetrators and count on them being rapidly caught. I apologize to the Jewish community of Gdansk. In the city of Freedom and Solidarity, we respect all religions and do not accept acts of hooliganism.”

The attack is “shocking and dismaying in itself, made all the more distressing by the fact that it took place on Yom Kippur, evoking the terrible tragedies that occurred in German-occupied Poland during the years of the Holocaust,” WJC President Ronald Lauder said.

The northern Polish city’s community said in a statement that the incident recalled the actions of ultranationalists in the 1930s, who “would often target synagogues on Yom Kippur.” Such attacks are very rare in Poland today, where documented anti-Semitic incidents are mostly verbal.

In Poland, which is home to some 20,000 Jews, Deputy National Prosecutor Agata Gałuszka-Górska in May said that the number of anti-Semitic incidents had dropped by 30 percent, to 112 last year from 160 in 2016. Anti-Semitic hate crimes accounted for about 6 percent of all hate crimes recorded, she said.

In November, 60,000 people attended a nationalist march in Poland that featured anti-Semitic and anti-Muslim rhetoric. Some local Jews say the government is tolerating ultranationalism that elevates the risk of anti-Semitic violence. But other leaders of Jewish organizations in Poland dismiss the claim.

Opposition by Israel and Jewish groups to Poland’s passing in January of a law that criminalizes blaming the Polish nation for Nazi crimes has fueled fresh reports of rising anti-Semitism in Poland.