The Schönborn Palace in Prague is now the home of the United States Embassy to the Czech Republic. (Wikimedia Commons)
Advertisement

WASHINGTON (JTA) — If you love something but can’t possess it, you write about it.

This, the secret axiom of many a besotted author, applies to the palatial embassy residence in Prague that seduced Norm Eisen. As U.S. ambassador to the Czech Republic, he lived in it for three years, from 2011-2014, and wrote about it for four, resulting in a lyrical paean running 300 pages.

“The Last Palace,” part memoir, part family history, tells the story of a century of European upheaval as it played out in one baronial Prague address.

But the house is not the only elusive love object in “The Last Palace,” which Eisen says has gone to three printings since its release two weeks ago. Also unrequited, to varying degrees, are Eisen’s longing for a Czech identity and his hopes for a democratic European future.

Threaded through this narrative of unrequited love is Eisen’s late mother, Frieda, who acts as a muse, a chorus and skeptic. When Eisen calls her from Air Force One in 2010 to tell her President Barack Obama has nominated him to be ambassador to the country she fled, she is less than enthused.

Back home in Los Angeles, she tells him: “You don’t know Europe like I do. It hasn’t changed that much.”

Eisen futilely implores his mother to join his family and live at the embassy and reminds her that she has spoken longingly of the former Czechoslovakia.

“Nachman, it’s a mistake to love a country,” she warns him. “It can’t love you back.”

Eight years later, he has to a degree internalized that lesson.

“It was incredibly satisfying to be able to live back in my mother’s homelands, the Czech and Slovak homelands, to be in the capital of the old Czechoslovakia,” Eisen, 57, said in an interview at his office at the Brookings Institution, where he is a senior fellow in governance studies (and a frequent TV critic of President Donald Trump),

“What I didn’t see, and what she warned me of, is all is not as rosy and nostalgic as it might seem,” he said.

At first, Eisen is only smitten by Prague, the Czech Republic and especially the embassy residence, a massive, curving wedding cake that has one foot in the Neoclassical period and another in 1920s Modernism. He is so taken that he rushes to tell his mother about its remarkable history, including a swastika stamped onto an inventory sticker beneath a French antique table.

“There are swastikas in the house?” she tells him. “Why would I want to visit any place that the Nazis liked?”

Eisen structures the book around the tensions between his enthusiasm for the house and the country and his mother’s child and young adulthood, under the Nazis and then the communists.

There are four parts, each covering a different resident of the house. They are riveting and each includes twists that you would simultaneously enjoy but deride as manipulative were they to appear in fiction (spoiler alerts!). The characters include:

–Otto Petschek, the Jewish coal baron who almost bankrupted himself building the house as a love letter to his beloved wife, only to die within four years of its completion from mysterious pains.

–Rudolf Toussaint, the German general and the Nazi commander of forces in Prague, who carefully preserved the house — including its Jewish memorabilia — and who bargained with the resistance over his son’s life in the messy final days of the Nazi occupation.

–Laurence Steinhardt, the Jewish postwar ambassador who established the building as the U.S. embassy and lived in it with his wife and daughter while entertaining his mistress, Cecilia Sternberg, a Czech countess. In a denouement out of “Casablanca,” Steinhardt secures safe passage out of Prague for Cecilia and her husband as the communists consolidate control over Prague.

–Shirley Temple Black, the U.S. ambassador during the “Velvet Revolution,” when Czechoslovakia shucked off its communist leaders in 1989. Black risked her host government’s censure and worse by appearing in public with the dissenters and assuring U.S. support for their struggle. Back at the residence the former child star marked the victory with an impromptu performance for her staff of “The Good Ship Lollipop,” “singing and dancing around the room in pure joy.”

Each part has four chapters: Three about the resident, and the fourth about Eisen’s mother’s journey — creating juxtapositions that are variously nostalgic and, in Frieda’s case, unsparingly unsentimental.

“The past is never dead, it’s not even past,” Eisen titles the last chapter, quoting Faulkner. 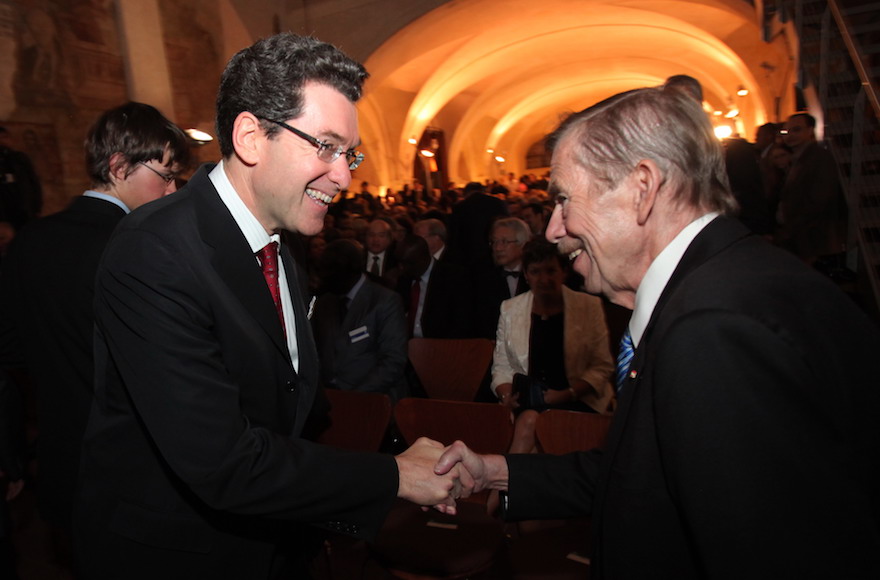 Soon after he arrives, Eisen meets Vaclav Havel, the playwright dissident who became the post-communist president of Czechoslovakia (and who presided over its dissolution into the Czech Republic and Slovakia). Eisen asks Havel’s advice and it is surprising: “You must be a very undiplomatic diplomat.”

Eisen soon understands Havel’s meaning: Under then-President Vaclav Klaus, the Czech Republic was veering towards illiberalism. Eisen attends a commemoration at Lety, the site of a Nazi concentration camp for Roma people, and emerges from his car into the overwhelming stench of the adjacent pig farm. He discards his prepared remarks and berates the government for the disrespect toward a minority that still suffers discrimination.

A top aide to Klaus repeats racist tropes about Obama. Another senior official delivers a letter to the embassy denouncing its support for an LGBT pride march.

His mother, closely monitoring his ambassadorship, worries about Eisen. He insists that these are the expressions of the lunatic fringe.

These are government officials, she remonstrates.

“Milacku [Dear], how can you be so blind? The Jews, the Gypsies, now the gays — you don’t see a pattern here?”

Eisen indeed detects a pattern, and not just in the Czech Republic: Klaus’ illiberalism is replicated across the continent, in Hungary, in Poland, in the rise of the far right in Britain, France and Italy, in the spread of Russian influence and in the leadership of Vladimir Putin — and in the United States, with the election of Trump.

Eisen’s book, planned as a love letter, has become a warning.

“Trump is on every page of my book even though his name never appears,” he said.

Eisen is on the frontlines of the “resistance” to Trump. Prior to his ambassadorship, he was “ethics czar” in the Obama White House. (He and Obama were classmates at Harvard Law.) Eisen co-founded in 2003 Citizens for Responsibility and Ethics in Washington, and he is its chairman. CREW has filed a lawsuit claiming Trump’s businesses continue to illegally receive money from foreign governments.

Eisen and George W. Bush’s ethics czar, Richard Painter, are a bipartisan tag team, flooding cable TV and op-ed pages with blasts against Trump policies and practices, particularly Trump’s flirtations with the far right and his derision of minorities.

The book ends on a hopeful note: His mother finally agrees to come visit.

“Let’s pick a date,” he quotes her as saying in closing the book. He could not bring himself to add that she never made it.

“She took ill and she passed,” he said in the interview.

Her resilience, the steel that carried her through the Nazi horrors and then the Communist brutality, lives on in her son, but he preserves his optimism.

“Trump is hostile to all forms of liberal democracy. We’re in the third night of democracy: fascism, cold war communism, and the third night is Putin and Trump,” he said. “But democracy is much stronger than its adversaries.”