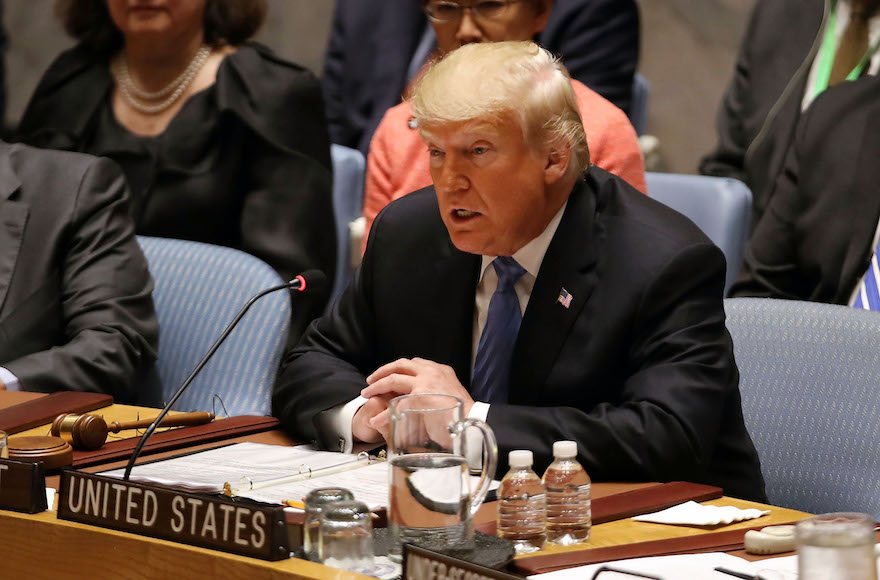 (JTA) — U.S. President Donald Trump made the case for less globalism and more sovereignty in his address to the United Nations General Assembly.

He also stressed that the United States would only give aid to countries that are its “friends.”

Trump on Tuesday in his second address to the international body first touted his successes to the delegates and guests saying that the United States is “stronger, safer and a richer country than it was when I assumed office less than two years ago.” The declaration of success prompted chuckles from the audience.

“The U.S. will always choose independence and cooperation over global governance, control and domination,” Trump said. “I honor the right of every nation in this room to pursue own customs, beliefs and traditions. The United States will not tell you how to live or work or worship. We only ask that you honor our sovereign rights in return.”

He noted that the U.S. has made “giant strides” and helped to bring “very historic change” to the Middle East, including bringing Saudi Arabia, the United Arab Emirates and Qatar into the fight against terrorism.

“Ultimately, it is up to the nations of the region to decide what kind of future they want for their children,” he said.

He said that the “ongoing tragedy in Syria is heartbreaking” and called for the UN-led peace process in the face of the country’s long-running civil war to be invigorated. He added that the United States would respond if chemical weapons are used.

Trump blamed the “corrupt dictatorship in Iran” for continuing the conflict in Syria through money and support for the government of President Bashar al-Assad.

“They sow chaos, death and destruction,” Trump said. “They do not respect their neighbors or borders, or the sovereign rights of nations. Instead, Iran’s leaders plunder the nation’s resources to enrich themselves and to spread mayhem across the Middle East and far beyond.”

“The United States is conducting a campaign of economic pressure to deny the regime the funds needed to advance their bloody agenda,” he added, referring to his decision to pull out of the Iran nuclear deal and reimpose sanctions on the Islamic Republic.

He briefly mentioned his administration’s decision to move the U.S. embassy to Jerusalem, saying that peace “is advanced, not harmed, by acknowledging the reality.”

Trump noted the United States’ withdrawal from the Human Rights Council and said it will not return “until real reform is enacted.” He also said that the International Criminal Court has “no jurisdiction, no legitimacy and no authority.” He announced that the US would not participate in the new international compact on migration, saying such decisions should not be global but undertaken by each nation.

Trump announced that the United States “will not be taken advantage of any longer,” and that it would only give foreign aid to countries “that respect us and, frankly, are friends.” In addition, he said that the United States would not pay more than 25 percent of the United Nations peacekeeping budget and would move its funding from assessed to voluntary. He called on other nations to step up in their funding as well.