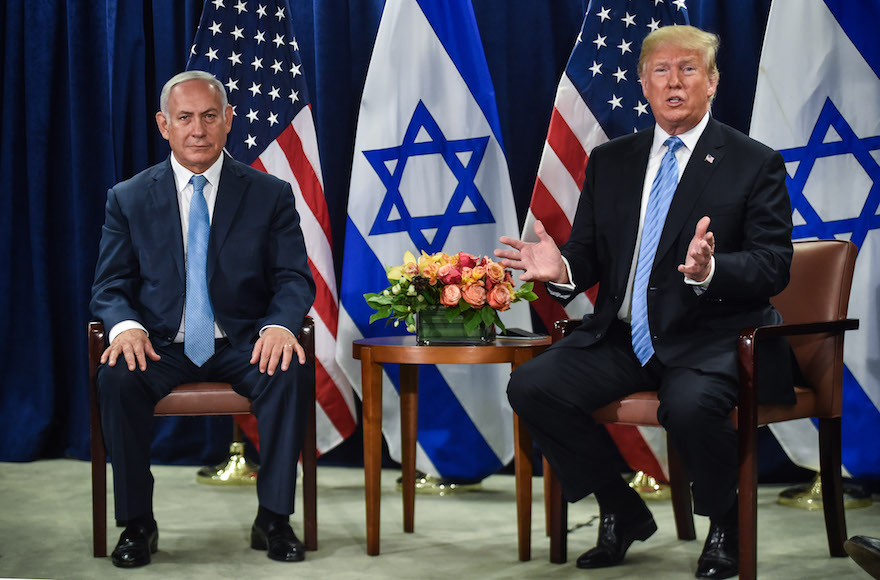 WASHINGTON (JTA) — President Donald Trump said ahead of a meeting with Israeli Prime Minister Benjamin Netanyahu that he favors the two-state solution and that he hopes to reveal his peace plan within four months.

“I like the two-state solution,” Trump said, appearing Wednesday with Netanyahu at the United Nations during the world body’s General Assembly. “That’s what I think works best.”

The statement was less than a definitive walkback from Trump’s comments soon after he assumed office, in which he appeared to retreat from years of U.S. policy that supported a Palestinian state alongside Israel as an outcome of a final status peace deal. But the president suggested that two states would be wrapped into the peace proposal now being drafted by a team led by his son-in-law, Jared Kushner.

Netanyahu, who since 2017 also has retreated from a two-state commitment, played down the significance of Trump’s statement.

“Everyone defines the term ‘state’ differently,” he told reporters after the Trump meeting, Haaretz reported. “I am willing for the Palestinians to have the authority to rule themselves without the authority to harm us.”

Trump predicted the plan would appear by early next year.

“I would say over the next two to three to four months, something like that,” he said. “That would be the time that I’d like to at least release the plan.”

Trump said he was confident the Palestinians would return to the effort to revive the peace talks, although they quit the process in December after Trump recognized Jerusalem as Israel’s capital.

Trump has cut off all U.S. assistance to the Palestinians. He suggested that if they rejoined the process, aid would resume.

“We were being abused by the leadership of the Palestinians and giving them all of this money,” he said. “So now we’re not. But that will start up again and it’ll start up — I look forward to it because they use it for some purposes that are good.”

Kushner and his team, including lead negotiator Jason Greenblatt and ambassador to Israel David Friedman, have not released any details of their proposed deal, which has frustrated their efforts to garner support for it.

Jordan’s King Abdullah, also in New York for the General Assembly, met privately with Jewish leaders and dismissed reports that Arab nations were lining up behind the peace proposal, saying that none of them — including himself — have any idea what’s in it.

Netanyahu thanked Trump for moving the embassy to Jerusalem, and also for his tough posture toward Iran, particularly for pulling out of the 2015 nuclear deal, which traded sanctions relief for a partial rollback of Iran’s nuclear program. Netanyahu led opposition to the deal, and Trump this year restored some sanctions on Iran.

“I think that the fact that you brought American sanctions to bear has cut the cash machine of Iran and its campaign of carnage and conquest of the Middle East,” Netanyahu said.

The international community has mostly opposed the U.S. pullout, and Europe, Russia and China hope to sustain the deal even with the U.S. absence.

Trump chaired a session of the U.N. Security Council on Tuesday and asked other nations to reinstate Iran sanctions.

“I ask all members of the Security Council to work with the United States to ensure the Iranian regime changes its behavior and never acquires a nuclear bomb,” he said.

Trump didn’t make much headway, at least gauging the reactions of the diplomats present.

“The unilateral withdrawal of the United States from [the deal] creates a serious threat to nonproliferation,” Russian Foreign Minister Sergei Lavrov said.

Trump’s two top foreign policy deputies, National Security Adviser John Bolton and Secretary of State Mike Pompeo, made the case for Iran’s isolation Tuesday at a conference convened by United Against a Nuclear Iran, a group that has led the charge against the deal and has ties to the centrist and right-wing pro-Israel community.