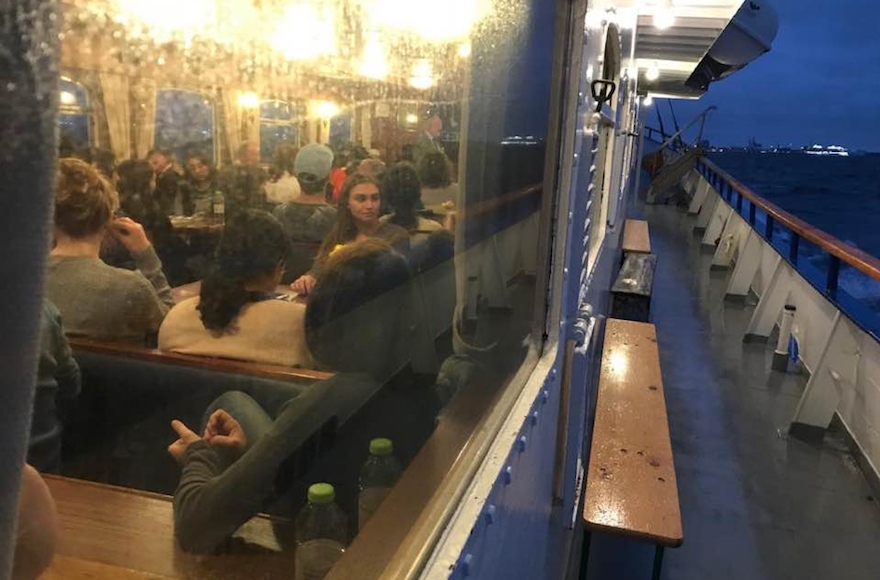 Danish Jews celebrating the rescue of their community from the Holocaust 75 years ago by sailing to Sweden in a reanactment ceremony on Sept. 26, 2018. (Courtesy of Rochel and Yitzi Loewenthal)
Advertisement

(JTA) — Dozens of Danish Jews, including five Holocaust survivors, participated in a re-enactment of the rescue 75 years ago of Danish Jewry from the Nazi genocide.

Local Chabad emissaries Rabbi Yitzi and Rochel Loewenthal organized the re-enactment, the first of several events this year marking the rescue of thousands of Danish Jews in October 1943 by local fishermen and other boat operators, on Wednesday, the Hebrew calendar date of the operation.

In the operation, which involved the Danish underground, some 7,200 Jews were ferried across the Oresund straits to neutral Sweden days after the Nazi occupation forces in Denmark began moving on its Jewish population.

“When we hit Swedish waters, we said Kaddish,” Rochel Loewenthal told JTA on Thursday, naming the Jewish mourning prayer. It was recited for Holocaust victims and several dozen people who drowned in the rescue operation.

“It was very moving,” she said.

Loewenthal said that one of the survivors who said Kaddish was Henry Nachman, who was 5 years old when he was rescued but whose family drowned along the way.

In contrast to the solemn atmosphere en route to Sweden, the journey back to Denmark aboard the rented boat was more upbeat, with music from a klezmer band.

“There was music and the survivors told the rest of the story of how they kept in touch with their rescuers and started great Jewish families,” she said. “There was thanksgiving.”

Living in one of the few European countries whose Jewish population was mostly saved thanks to a grassroots effort by the local population “is something I carry with me each and every day,” said Loewenthal, who was born in Pittsburgh, Pennsylvania, but has lived in Denmark with her husband since 1996. “Throughout Europe it’s a story of bloodshed and betrayal, and here it’s a story of help and rescue and it’s something that fills us with conscious gratitude.”

The Jewish Community in Denmark – a representative body independent to the Loewenthals’ outfit – will co-host a ceremony marking the rescue on Oct. 11.