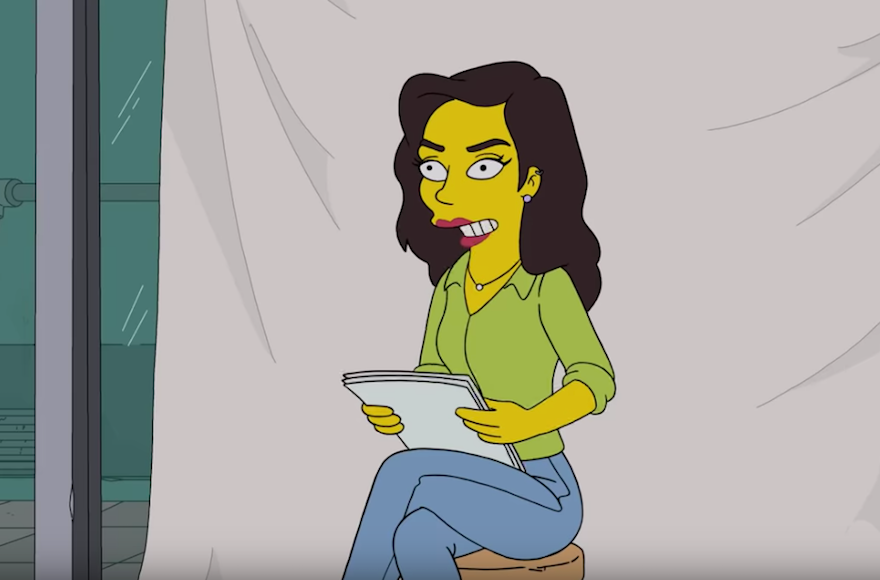 Gal Gadot plays herself in an episode of "The Simpsons." (Screenshot from YouTube)
Advertisement

(JTA) — Gal Gadot helped kick off the 30th season of “The Simpsons” with a slight Jewish bang.

The Israeli actress played herself in the season debut on Sunday night, which also included a short trip to “Jewish heaven.”

In the episode, Bart nearly dies and claims to have seen Jesus. Christian producers attempt to make a movie out of his experience, and Gadot is brought in to audition for the role of Bart’s sister Lisa.

At the movie’s premiere, Gadot hands out hot dogs, a reference to her stunt with Jimmy Kimmel at the last Academy Awards.

Later in the episode, Bart finds himself in “Jewish Heaven” (the Simpson family is not Jewish) with the likes of Joan Rivers, King David, Golda Meir, Albert Einstein and Rabbi Hyman Krustofsky, the late father of the character Krusty the Clown. Gadot is there, too, and says “They like me so much I get to visit,” according to Haaretz.

“Jewish Heaven” was previously featured in an episode in season 26, back in 2014. After Krusty’s father dies, Krusty gets taken on a tour by Rodney Dangerfield.

“There’s no Jewish heaven,” Krusty’s father tells him, Haaretz notes. “Our faith teaches us that once you’re dead, that’s it. Kaput. It’s dark. It’s cold. It’s like that apartment we lived in before I started doing weddings.”