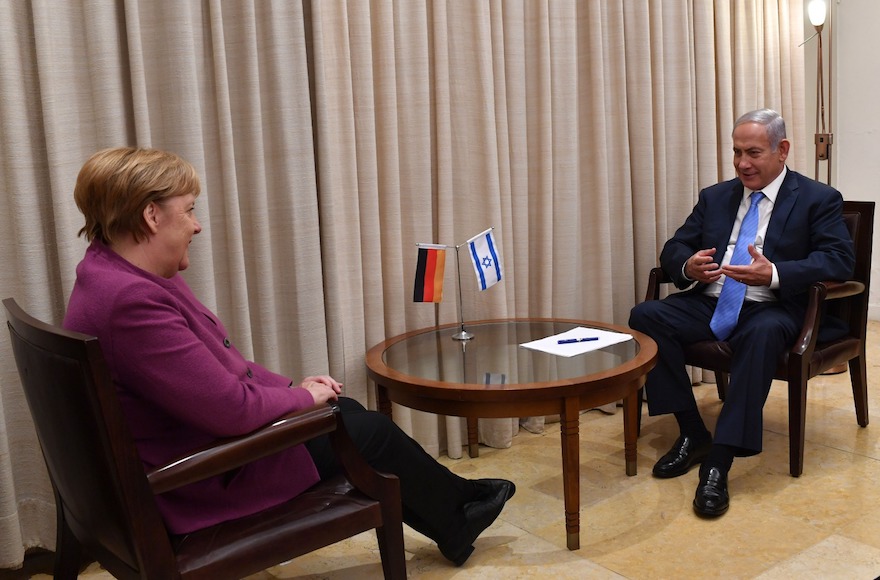 “Nearly 80 years ago, on the pogrom night of Nov. 9, the Jewish people in Germany faced unprecedented hate and violence,” she said in reference to the Kristallnacht pogrom. “But what followed were the unprecedented crimes of the Shoah and its break with civilization. From this comes the everlasting responsibility of Germany to remember this crime and to oppose anti-Semitism, xenophobia, hatred and violence.”

During a separate event Merkel, who is in Israel with her Cabinet, responded to a query regarding Iran by reiterating her opposition to the American and Israel approach embraced by Prime Minister Benjamin Netanyahu and President Donald Trump.

“On the basic statement that everything must be done to prevent Iran from obtaining nuclear weapons, we are in agreement,” she said. “The issue on which we have different views is whether the agreement reached with Iran is the way, for a limited time, to prevent it from developing nuclear weapons.”

Trump this year pulled the United States out of the 2015 nuclear deal trading sanctions relief to Iran for a pullback of its nuclear weapons program. Netanyahu had vehemently opposed the agreement signed by the U.S. and other world powers with Iran.

While the United States has been working to reimpose sanctions on the Islamic Republic, Germany and the European Union have been seeking legal means to circumvent American restrictions in order to continue trading with Tehran.

On Thursday, during a meeting with Merkel, Israeli President Reuven Rivlin argued against these attempts, saying that Israel “cannot avoid speaking out against the decision taken by the European Union aimed at circumventing the sanctions on Iran.”

“As we see it, now is the time to join the effective sanctions on Iran, not to work around them. We must starve the Iranian monster, not feed it. This is the only way we can maintain the stability of this region. We ask Germany to stand with us in our demands for inspection of the Iranian nuclear program, and not allow them to evade their commitments.”

Rivlin said a new breed of anti-Semitism is rising in Europe.

“This time it takes the form of right-wing nationalist politics with roots in Nazism, and it is gaining momentum across the continent,” he said. “Some of these people appear to support Israel but hate Jews. There should be no misunderstanding. There is no such thing as loving Israel and hating Jews.”