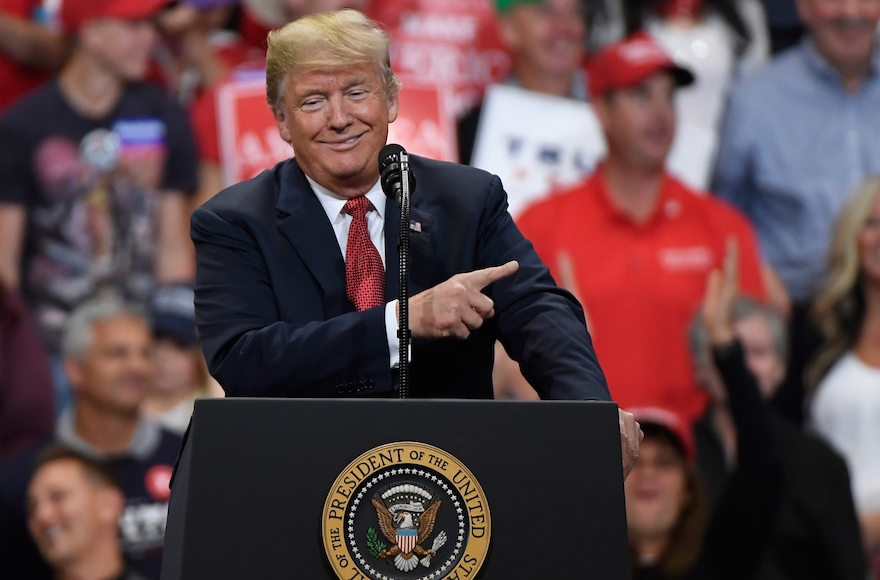 Trump made the claim Friday on Twitter hours after hundreds of protesters were detained during a sit-in rally in Washington D.C.

“The very rude elevator screamers are paid professionals only looking to make Senators look bad,” Trump wrote. “Don’t fall for it! Also, look at all of the professionally made identical signs. Paid for by Soros and others. These are not signs made in the basement from love! #Troublemakers”

Trump tweeted about Soros after Sen. Chuck Grassley, R-Iowa, the chairman of the Judiciary Committee that advanced the Kavanaugh nomination to a full Senate vote, made the accusation about an hour and a half earlier on the Fox Business News channel that Soros was paying the elevator protesters.

“I have heard so many people believe that. I tend to believe it,” Grassley said in response to a question from Maria Bartiromo.

The Washington protest was organized in part by the Women’s March group. Comedian Amy Schumer, who is Jewish, held a “We believe Anita Hill” sign, referencing the woman who accused then-Supreme Court nominee Clarence Thomas, now justice, of sexual harassment. Schumer was later arrested along with hundreds of others.

Three women have accused Kavanaugh of sexual assault ahead of the Senate confirmation procedure. Kavanaugh has denied the allegations that date back to the 1980s and were not reported to authorities at the time.

Soros, who is a Hungary-born Holocaust survivor, is a left-leaning donor to the Democrats and other liberal causes in the United States, Europe and Israel. He often features in right-wing conspiracy theories, especially in his native Hungary, where nationalist Prime Minister Viktor Orban has pegged him as a symbol of intruding globalist forces.

During his presidential campaign in 2016, Trump ran an ad that criticized “those who control the levers of power in Washington” and “global special interests.” Over those words were images of Soros and the then-Federal Reserve chief Janet Yellen, who also is Jewish.