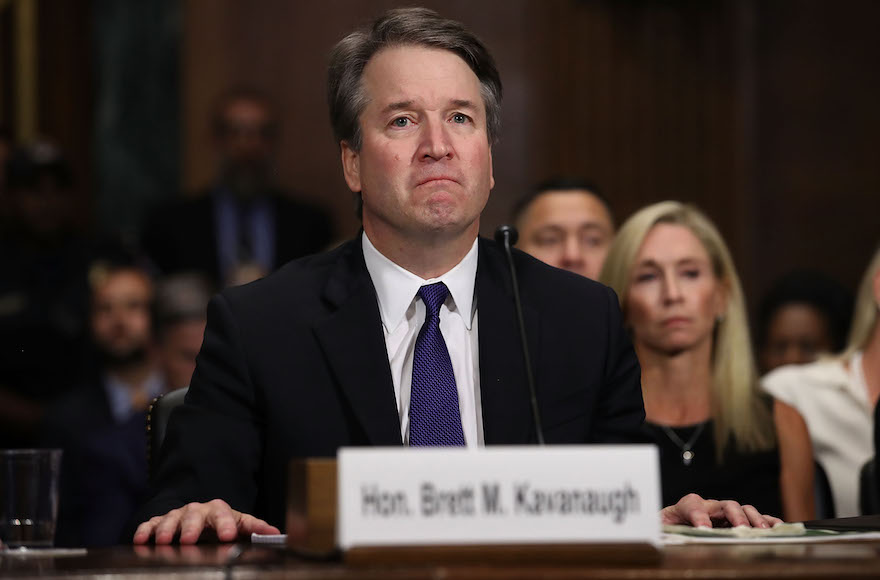 National Council of Jewish Women CEO Nancy Kaufman called Kavanaugh’s ascension to the high court “a devastating blow to the confirmation process, and to women and all survivors of sexual assault.”

“The expectation that the Supreme Court will deal fairly and dispassionately in the foreseeable future regarding the cases brought before it has been seriously compromised,” Kaufman said in a statement.

“We will now face a highly conservative court where women, survivors, and many other vulnerable people in our society can no longer look to the Supreme Court as their last hope for justice to prevail. And a terrible precedent has now been set for the lowered standard employed for confirmation to the court. Today is a sad day for Americans who have believed our democracy is a model for the rest of the world.”

Kavanaugh was confirmed by the U.S. Senate on Saturday in a 50-48 vote. At least three women have accused the Washington, D.C., appeals court judge of sexual assault or inappropriate sexual behavior from decades ago.

Rabbi Marla Feldman, executive director of Women of Reform Judaism, called Kavanaugh’s elevation to the court “a shameful example of the dysfunction of our leadership and the need for women to stand in solidarity behind the victims of sexual assault.”

“While we may never know what happened in that room the night so painfully described by Dr. [Christine Blasey] Ford, we do know that, like too many victims of sexual assault, her trauma was exacerbated by being mocked and doubted. That the leaders of this nation were responsible for that treatment is a travesty.”

Feldman blamed the U.S. senators “who allowed the hearings to devolve into partisanship and obfuscation,” adding that “the American people deserve better.”

The executive director of the Jewish Democratic Council of America, Halie Soifer, said in a statement that her organization is “deeply disappointed” with Kavanaugh’s confirmation and “issues a warning to Republicans who supported him – actions have consequences and your constituents will judge you harshly in November.”

The Jewish Democrats accused the Republican majority of rushing Kavanaugh’s nomination through the Senate “under the cloud of distrust, belligerence, and obfuscation.” The statement also called Kavanaugh “unsuited for the Supreme Court,” citing, among other things, the “belligerence he demonstrated at last week’s Senate Judiciary Committee hearing.”

The Republican Jewish Coalition applauded the confirmation, saying in a statement that the Senate “has acted fittingly in confirming an outstanding judge to the highest court of the land.”

“The process of confirming Judge Kavanaugh to the Supreme Court was difficult and contentious – and clear evidence of the tremendous importance of the upcoming midterm elections,” RJC Executive Director Matt Brooks said. “Without a Republican majority in the Senate, Judge Kavanaugh could well be the last Trump nominee for any post to be confirmed.”

Republican leaders have “rewarded a wildly unpopular nominee — who was credibly accused of sexual assault, who wields an impetuous temperament, who has broken all norms by expressing partisan rhetoric, and who has outright promised to take revenge on Democrats — with a lifetime seat on the Supreme Court,” Bend the Arc CEO Stosh Cotler said in a statement.

She praised Kavanaugh’s three accusers — Ford, Deborah Ramirez and Julie Swetnick — “and the countless number of survivors who have stepped forward in recent weeks to speak truth to power and share their stories in the bravest possible ways, in the offices of their Senators, in hallways and elevators, and as a witness to the Senate Judiciary Committee.”

Kotler called Kavanaugh’s confirmation “a fundamental threat to our values and to the rights of women, immigrants, workers, the LGBTQ community, people of color, and other vulnerable communities.”