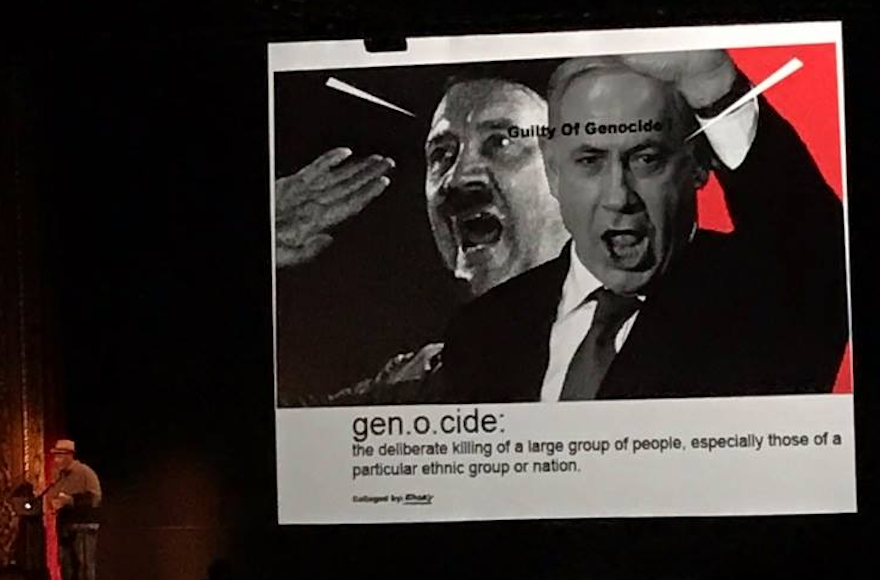 Emory Douglas, part of the Penny Stamps Speakers Series Presentation of the Stamps School of Art & Design, displayed a slide that showed a picture of Netanyahu and Hitler with the words “Guilty Of Genocide” written across their faces. Below the photo was the definition of genocide.

Douglas “worked as the resident Revolutionary Artist and Minister of Culture for the Black Panther Party in the San Francisco Bay Area from 1967 through the 1980s,” according to the school’s website. “During his tenure, Douglas created powerful images to depict the reality of racial injustice in America and to promote the party’s ideologies. His distinctive style established the ‘militant-chic’ style decades before the aesthetic became popularized and sought to flip the cultural paradigm from one of African American victimhood to one of powerful outrage.”

The content of the lecture first came to public attention via a Facebook post on Friday by a Jewish University of Michigan student, Alexa Smith. The post included a photograph of the slide of Douglas’ artwork.

“Yesterday I was forced to sit through an overtly anti-Semitic lecture,” she wrote, adding: “In what world is it ok for a mandatory course to host a speaker who compares Adolf Hitler to the Prime Minister of Israel?

Smith noted that two years ago, another mandatory Stamps lecture speaker, Joe Sacco, called Israel a terrorist state and explicitly claimed that Israeli soldiers were unworthy of being represented as actual human beings in his artwork.

“This time I will no longer sit quietly and allow others to dehumanize my people and my community,” she wrote. “The administration is repeatedly failing to forcefully respond to antisemitism, and so it comes back worse and worse each time. A line needs to be drawn and it needs to be drawn now.”

The university’s assistant vice president for public affairs, Rick Fitzgerald, said in a statement issued Friday that “Douglas covered a wide array of subject matter within the overarching context of his work, which looks at the oppression of people across the globe by governmental powers,” and added that his presentation included a video and nearly 200 slides with images of his work.

A portion of Douglas’ presentation on the process of creating art included examples of juxtaposing images of world leaders.

“The Stamps program is intentionally provocative and we are clear with our students about this. The school does not control or censor what speakers present,” Fitzgerald said.

Undergraduates receive academic credit for attending 11 of 14 scheduled Stamps events during the school year and may select which events to attend.

Last month, a University of Michigan professor of American culture, John Cheney-Lippold, declined to recommend junior Abigail Ingber for a semester abroad in Israel because he supports the Boycott, Divestment and Sanctions, or BDS, movement targeting the country.