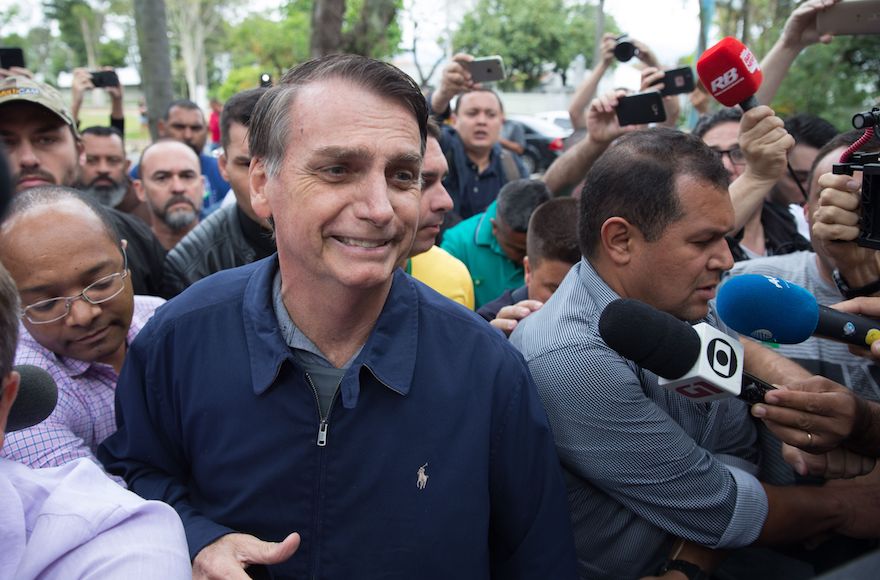 RIO DE JANEIRO (JTA) — Jair Bolsonaro, an ardently pro-Israel candidate who is highly divisive among Jews for his racist and homophobic statements, won the first round of Brazil’s presidential election and remains the front-runner to lead the Latin American nation.

Bolsonaro, a 63-year-old conservative Christian congressman, won 46 percent of the ballot on Sunday as voters appeared to reject Brazil’s political establishment in a country struggling to emerge from recession and corruption scandals.

However, the rightist candidate did not reach the 50 percent needed for an outright victory and will face far-left rival Fernando Haddad in a second round of balloting on Oct. 28. Haddad, a former mayor of Sao Paulo, is heavily backed by ex-president Luis Inacio Lula da Silva, who is serving a 12-year prison sentence for corruption and money laundering.

Fernando Lottenberg, president of the Brazilian Israelite Confederation, told JTA that the country is facing a polarizing choice in the runoff.

“Bolsonaro starts with an important advantage,” Lottenberg said. “The Jewish community is quite diverse. We will work so that political differences do not affect our unity.”

Bolsonaro, who counts on passionate support from much of the Jewish community, declared recently that he will move the Brazilian embassy to Jerusalem from Tel Aviv and close the Palestinian embassy in Brasilia.

“Is Palestine a country? Palestine is not a country, so there should be no embassy here,” he said. “You do not negotiate with terrorists.”

The retired army captain, who represents the Rio de Janeiro state in the National Chamber, espouses a crackdown on crime and a return to traditional family values. He prides himself on the fact that he has never been accused of corruption during his nearly 30-year political career.

“Bolsonaro has a real chance to become president,” Rio Jewish Federation President Ary Bergher told JTA. “His victory in the first round made us very joyful and hopeful due to his friendship, love and bonds not only with the State of Israel but with the whole Jewish people. He will be a great president by having Jewish ethics and morals as his pillars.”

Bolsonaro also has declared that he will seek to broaden dialogue with Israel, the United States and Europe. The Jewish state reportedly will be his first international trip if elected.

“He stood out among the many candidates for including the State of Israel in the major speeches he made during the campaign,” Israel’s honorary consul in Rio, Osias Wurman, told JTA. “He is a lover of the people and the State of Israel.”

Leftist Jewish groups accuse Bolsonaro, who many refer to as “Brazil’s Trump,” of racism, homophobia and misogyny. Some have called his speech Nazi-like. Anti-Bolsonaro demonstrations have been held in some cities, while groups and hashtags against the candidate have appeared online. Bolsonaro has said that he is “pro-torture,” joked about rape with a female lawmaker and said he would rather see his son die than be homosexual, among other things.

On Sept. 6, Bolsonaro was stabbed and seriously injured during a street rally while campaigning in the city of Juiz de Fora. The assailant, whose action was captured on cellphone videos and went viral, told police he was “on a mission from God.”

After receiving local emergency treatment, Bolsonaro chose to be transferred to a Jewish hospital in Sao Paulo to recover from life-threatening injuries. The fact that the politician declined treatment offered by the Syrian-Lebanese, another elite hospital commonly chosen by senior politicians, led to conspiracy theories in social media.

The most radical among Bolsonaro’s nearly 10 million followers suggested his life would be at risk at a place “by the hands of Arab and Muslim doctors,” adding that at the Jewish-led Albert Einstein, Israel’s Mossad would be able to protect him.

In 2017, Bolsonaro told an audience of 400 at the Hebraica club in Rio that “My heart is green, yellow, blue and white,” in a reference to the Israeli and Brazilian flags. The venue was surrounded by Jewish leftist youth groups who opposed the speech and called those who attended “shameless Jews” and “Jews without memory.”

Bolsonaro’s supporters usually refer to him by the nickname “Mito,” from the word myth or legend. His three sons, also politicians, have been photographed wearing T-shirts with messages in Hebrew. One of them was elected senator on Sunday.