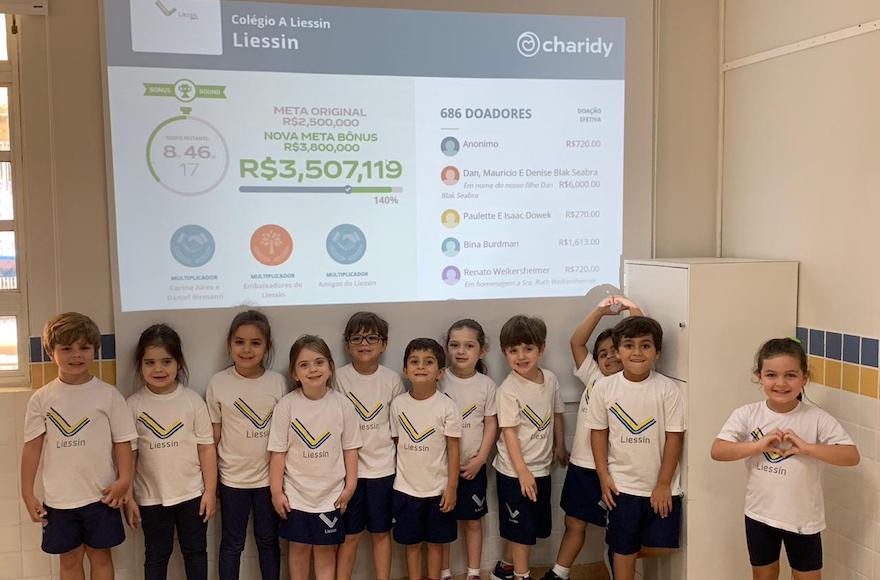 Students at the Liessin day school in Rio de Janeiro, Brazil, during their recent fundraising drive. (Courtesy of Liessin)
Advertisement

Liessin exceeded its initial target by 65 percent with contributions from 1,087 donors on Tuesday and Wednesday. A growing number of the school’s 1,300 students have their $1,000 monthly school fee wholly or partially funded by scholarships.

“We thank everyone from inside and outside Liessin, including those kids who gathered their allowances and came to donate,” Liessin’s president, Ronaldo Redenschi, said on social media after announcing the tally results. “Everyone who participated has learned that all Jews are responsible for each other.”

Founded in 1945, the school offers classes from kindergarten to high school on three campuses. It is headquartered in Botafogo, Rio’s middle-class neighborhood, which houses several Jewish cultural centers, youth movements and synagogues, including the city’s largest.

“We need strengthened Jewish schools in order to fight against anti-Semitism and educate more and more children and youths,” said Ary Bergher, president of the Rio Jewish federation and a Liessin alumnus.

During the campaign, every amount donated via credit card and bank deposit was multiplied by four with the help of sponsors. The drive was supported by some 100 volunteers and boosted with teaser videos recorded by students, alumni and teachers, as well as Jewish and non-Jewish celebrities on WhatsApp and Facebook.

Supporters from other countries could donate in dollars or even shekels. According to the rules, if the initial target of $665,000 was not achieved, donations would be returned to givers.

“Tzedakah is a very important element in Jewish culture, it’s one of the biggest mitzvot,” Andre Wajsman, Charidy, a donation platform specialist in Brazil, told JTA. “Although Brazil doesn’t have a culture of donating, people have been learning the importance of donating.

Although most Brazilian Jews belong to the upper-middle-class, the country’s longtime economic crisis has squeezed family budgets. Jewish day schools may cost nearly twice as much than other non-Jewish private schools, so scholarships have been more and more sought after increasingly.

In May, Rio’s only Orthodox Jewish day school, TTH-Barilan, raised some $750,000 in a similar campaign, or 40 percent above the initial target. Last year, all 15 Jewish schools in Sao Paulo gathered $3.6 million in two days with the same goal.

“The fund is much more than financial support,” Esther Safra Dayan, president of the Beit Yaacov school, said at the time. “It gives emotional aid and technical preparation so that families and students can actually leave a situation of vulnerability.”

The granting of scholarships is based on a socioeconomic analysis of the families and includes a pedagogical follow-up of the children assisted, as well as support for parents and guardians with programs to train and approach Judaism. The anonymity of the child and family are anonymous.

Brazil is home to a 120,000-strong Jewish community, half living in Sao Paulo. In 2017, a record 700 Brazilian Jews moved to Israel, according to The Jewish Agency, most of them seeking a better quality of life, fleeing urban violence and impoverishment.