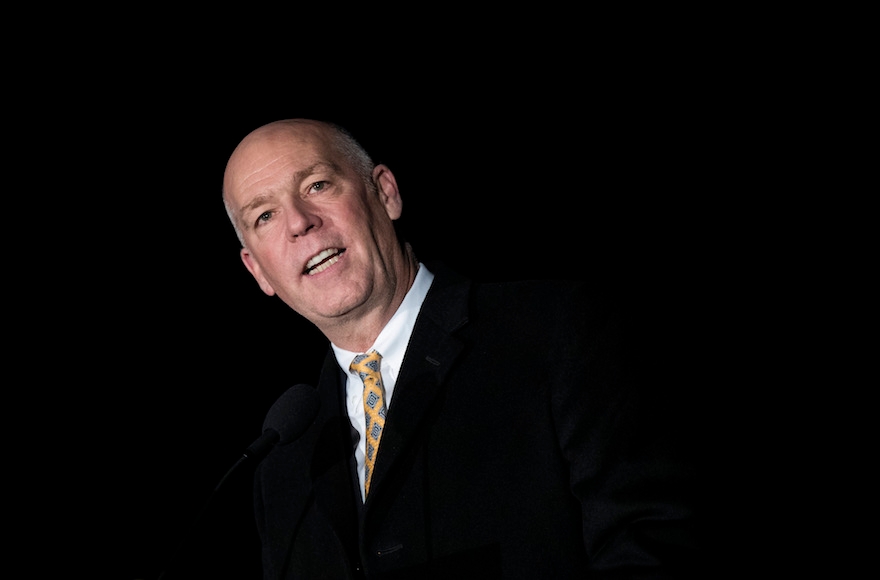 WASHINGTON (JTA) — President Donald Trump praised a congressman for a physical attack on a journalist, mimicking the assault to cheers at a rally.

“I had heard that he bodyslammed a reporter,” Trump said Thursday night at a rally in Missoula, Montana, referring to Rep. Greg Gianforte, a Republican congressman from the state. “Any guy that can do a bodyslam is my kind of guy,” he added, and then mimicked a bodyslam to the cheers and laughter of the crowd.

Trump had praised Gianforte last month in Montana, hinting that he admired him for among other reasons the attack in 2017 on Guardian reporter Ben Jacobs, who is Jewish. On Thursday, he explicitly praised the attack itself for the first time.

Gianforte attacked Jacobs on the eve of a special election in March 2017 after Jacob asked then-candidate Gianforte about the Congressional Budget Office’s report on the Republican health-care bill. Gianforte had been avoiding questions about the unpopular bill. Gianforte won the state’s lone seat in the House of Representatives by a margin of 54-40.

Gianforte later apologized for the attack and announced a $50,000 donation to the Committee to Protect Journalists, part of an agreement to settle any potential civil claims. In June 2017, he was sentenced to 40 hours of community service and 20 hours of anger management on assault charges and assessed a $385 fine and a six-month suspended jail sentence by the Gallatin County justice court.

Gianforte also promised Jacobs an interview but has yet to make good on the promise.

Trump was in Montana campaigning for Matt Rosendale, a Republican who is hoping to unseat Sen. Jon Tester, a Democrat.

The president has repeatedly referred to the media as the “enemy of the people,” leading critics to worry that he might inspire physical attacks on journalists.