Cabinet affirms demolition of Bedouin village, but grants extension for negotiations with residents 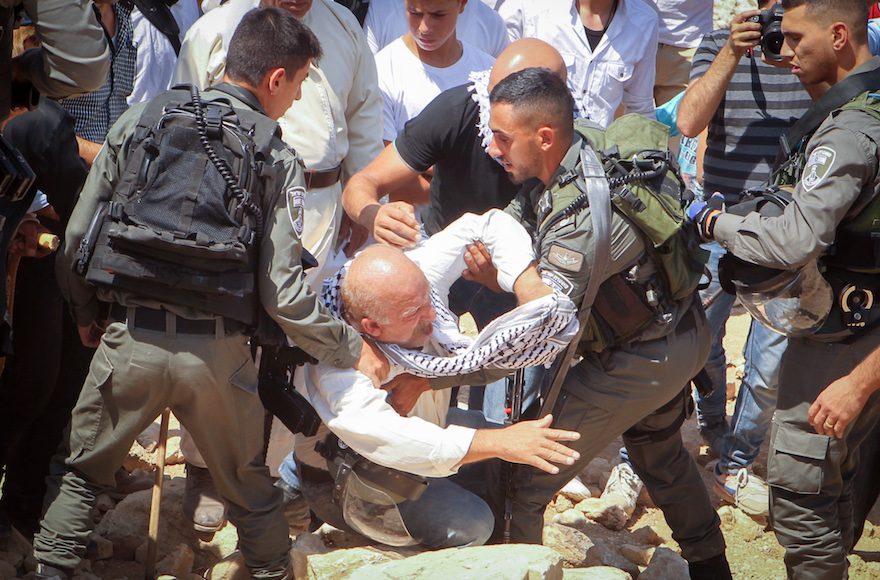 Demonstrators scuffle with Israeli police during a demonstration against Israel's plan to demolish the Palestinian Bedouin village of Khan al-Ahmar, in the West Bank, Sept. 14, 2018. (Wisam Hashlamoun/Flash90)
Advertisement

JERUSALEM (JTA) — Israel’s Security Cabinet affirmed that a Bedouin village in the West Bank would be demolished, but granted an extension of the time table in order to negotiate an agreement with its residents to leave the village.

The meeting was held on Sunday afternoon, hours after the Prime Minister’s Office had announced the postponement of the planned demolition of Khan al-Ahmar.

“This is our policy and it will be carried out. I have no intention of delaying this until further notice, contrary to what is being reported, but for a short period,” Netanyahu said during an appearance before reporters with visiting U.S. Treasury Secretary Steve Mnuchin.

The Prime Minister’s Office on Saturday night had announced that the evacuation would be delayed indefinitely amid new talks between the government and village residents. The announcement was met angrily by the Jewish Home Party, part of the ruling government coalition, which complained that the government was being selective in its demolition orders, leveling Jewish settlement housing it deemed illegal but bowing to international pressure to allow the Bedouin village to remain.

Israel’s Supreme Court in September rejected a petition by residents of Khan al-Ahmar to halt the village’s demolition. Israel says the homes there were built illegally and has offered to resettle the residents in a nearby area. Critics of the demolition believe that Israel is tearing down the village in order to make a contiguous Palestinian state impossible.

The international community and human rights organizations have rallied in support of Khan al-Ahmar.

On Wednesday, in a statement, International Criminal Court’s chief prosecutor, Fatou Bensouda, warned Israel that the demolition may constitute a war crime.

“It bears recalling, as a general matter, that extensive destruction of property without military necessity and population transfers in an occupied territory constitute war crimes under the Rome Statute,” Bensouda cautioned in Wednesday’s statement.

The Palestinian Authority filed a claim with the ICC in September against Israel over the demolition, calling it a war crime.

One proposal would be to move the village several hundred yards away from Highway 1 and away from lands claimed by the Kfar Adumim settlement.

The 180 residents of the village say they have been told they are not welcome at the site to which Israel planned to relocate them and that the area does not have sufficient land on which to graze their flocks.