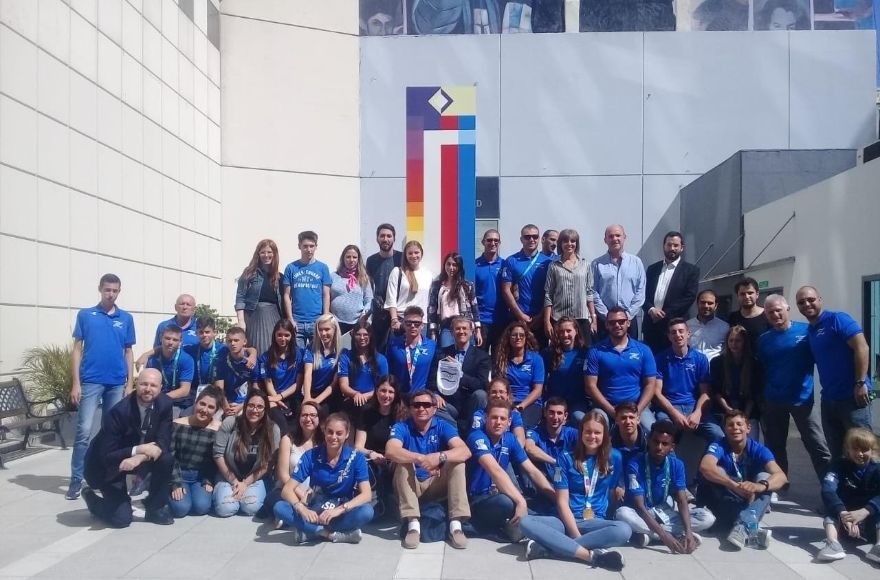 BUENOS AIRES, Argentina (JTA) — Israel earned a gold medal and a bronze medal in individual competition and a silver in a pair in gymnastics in the Buenos Aires Youth Olympics games.

The games ended on Friday.

On Oct. 15, athletes Yonatan Fridman and Noa Kazdo Yakar won the silver medal in acrobatic gymnastics, in the mixed pair category. On the first day of the games, Oct. 6,  Anastasya Gorbenko won a gold medal in the women’s 200m individual medley, setting also the new Israeli record of 2:12.88.

The following day, in the second day of swimming competition, Denis Loktev won the bronze medal in the 200-meter freestyle.

The Israeli swimmers appeared in an article on the official webpage of the games on the first weekend. “Last night I saw Anastasia win a gold medal, I felt hungry, excited, I’m very proud because it’s a small country.” said Loktev in the official Olympic coverage. He added: “We have very good youth.”

The Israelis remained in Argentina over the weekend. On Friday they visited the rebuilt headquarters of the AMIA Buenos Aires Jewish community center that was bombed in 1994, killing 85 and injuring hundreds.

The team also joined Israeli Ambassador Ilan Sztulman in a visit to the site of the Israeli Embassy attacked in 1992 that killed 29.

Buenos Aires 2018 will go down in history after 12 days of sports and cultural events that reached a record number of 1,001,496 spectators, including those who visited the venues and those present at the Opening Ceremony by the Obelisk, a national monument in the city.