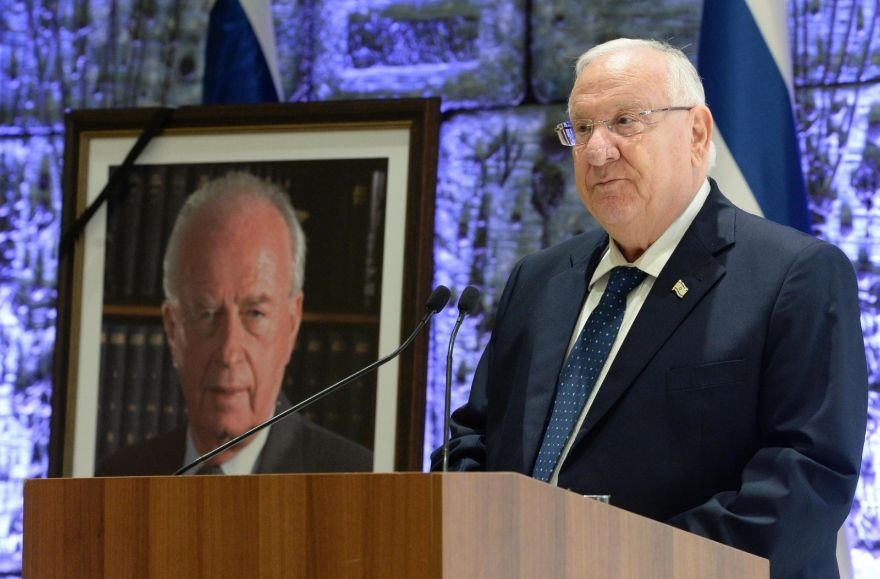 JERUSALEM (JTA) — President Reuven Rivlin of Israel, speaking at a ceremony marking the 23rd anniversary of the assassination of Prime Minister Yitzhak Rabin, expressed concern that the new generation does not understand the seriousness of the polarization and incitement that led to the murder.

Rivlin lit a memorial candle and spoke at the official ceremony opening the events marking the anniversary of Rabin’s death. It also marks the death of his wife, Leah Rabin, five years later in the same week.

Members of the Rabin family were among those on hand for the event at the president’s residence in Jerusalem. Others included Deputy Knesset Speaker Revital Sweid, Supreme Court Justice Neal Hendel and students from the Bilingual School in Beersheba.

“In the 23 years that have passed since the murder, we have been through difficult times; wars and contentious political initiatives,” Rivlin said. “Each time, and despite the polarization of views, we have avoided terrible moments like this. Have we healed? I am not sure. I do not know.

“Day by day, the generation that did not know Yitzhak grows. The generation that did not itself see the dark slippery slope from incitement and hatred to bloodshed. Children and young people who have grown up and were born and immigrated over the last 20 or 30 years, the leaders of our tomorrow, did not know Yitzhak. And did not know the murder. And the truth is that something is not working. Because each year we make speeches and hold ceremonies, and yet we see the erosion of the centrality of the murder and what it means in Israeli public discourse.”

A right-wing extremist, Yigal Amir, shot Rabin to death on Nov. 4, 1995, at the end of an event the prime minister held to demonstrate public support for his efforts to make peace with the Palestinians.

In addition to serving as prime minister, Rabin served as ambassador to the United States and defense minister, as well as Israel’s military chief of staff during the Six-Day War in 1967.

Yonatan Ben-Artzi, Yitzhak Rabin’s grandson, criticized sitting Prime Minister Benjamin Netanyahu in his address as a “leadership that encourages division and violent attacks on other opinions.”

“He who drives and incites against anyone who thinks differently from him as a sourpuss or a leftist will lead to the destruction of the next temple,” Ben-Artzi said.

Ben-Artzi reportedly called on Rivlin to support legislation that would put term limits on prime ministers. Netanyahu has served nearly 10 consecutive years in office after having previously served as prime minister from 1996 to 1999.