Why are people protesting Holocaust memorials in Holland and Belgium? 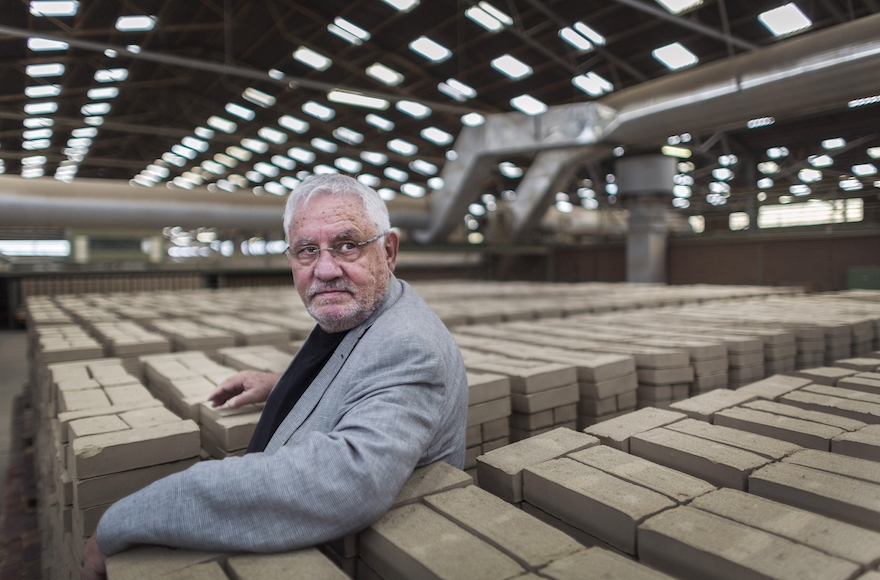 Jacques Grishaver, chairman of the Netherlands Auschwitz Comitee, inspecting bricks that will bear Holocaust survivors' names during a visit to the Dutch city of Nijmegen in 2016. (Marcel Molle)
Advertisement

AMSTERDAM (JTA) — Nearly 20 years ago, Amersfoort commemorated its 333 Holocaust victims with a beautiful and unusual object — a Torah-style scroll listing all their names along with the date and place of their deaths.

The scroll, a gift from the central Netherlands city’s Council of Churches to the municipality, was unveiled in a ceremony attended by then-Mayor Annie Brouwer in April 1999. Her speech acknowledged the victims’ suffering.

But according to information revealed last week, Brouwer and others in the city subsequently refused to display the item, offering to put it in the city archives. It remains there today, inaccessible to the public.

The city took issue with how the scroll lists only Jews, the De Stadbron newspaper reported this month, triggering an outcry.

Far from an isolated incident, the controversy unfolding in Amersfoort is symptomatic of a larger issue in the Netherlands and Belgium. There, Holocaust commemoration initiatives in recent years have been met with mounting resistance, despite significant grassroots interest in the genocide.

The phenomenon is becoming particularly common in the Netherlands, which unlike its neighbors never officially apologized for the role of its civil servants and some citizens in the murder of 75 percent of its prewar Jewish population of 140,000 — the highest death toll in Nazi-occupied Western Europe.

In 2013, the Dutch Railway Museum in Utrecht unsuccessfully fought the erection of a statue outside its doors commemorating the 1,224 local Jews who were sent to their deaths aboard national rail cars.

In Amsterdam, dozens of artists this month signed a petition opposing the erection of a national monument in the this capital city’s former Jewish quarter. Many current residents object to the memorial’s prominent footprint.

Even tiny monuments the size of postcards raise objections.

Last year, an Amsterdam couple sued the city over memorial plaques embedded in the curb outside their home that commemorate the Jews who once lived there. Following a backlash, they finally dropped their lawsuit, in which they said the objects “compromise the atmosphere” of their upscale street.

And in May, an Amsterdam bookshop owner said that a police officer asked him to remove a sign commemorating Holocaust victims, citing Israel’s actions.

Meanwhile, in the Belgian city of Antwerp, the municipality moved its main Holocaust monument from a place where victims were rounded up to another part of the city with less traffic, ignoring the protests of local Jews.

To Leon de Winter, the son of Holocaust survivors and one of Holland’s best-known writers, objections to Holocaust memorials are the result of “the need to suppress a sense of guilt for the massive collaboration” with the Nazis, coupled with “fatigue from hearing about the fate of the Jews.” 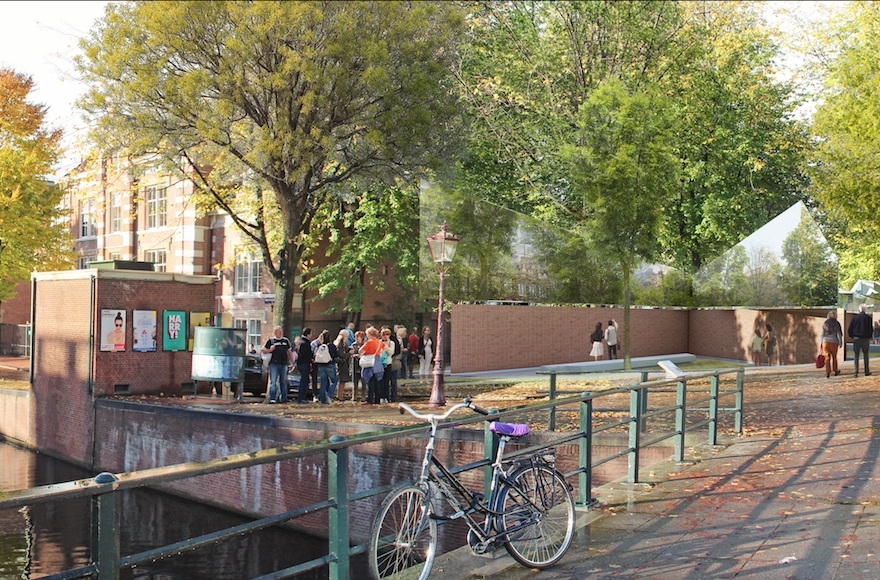 An artist’s impression of the Holocaust Names Monument in Amsterdam, designed by the American architect Daniel Libeskind. Opponents of the project object to its location and say it was approved without local buy-in.  (Courtesy of the Namen Holocaust Monument Nederland)

By contrast, Ronny Naftaniel, the executive vice chair of CEJI, a Brussels-based Jewish organization promoting tolerance through education, attributes them to “a misguided reluctance to set apart Jews, and a desire to view them merely as Dutch citizens, though this of course discriminates against them because they and the Roma alone were selected for annihilation as Jews and Gypsies – precisely not as Dutchmen.”

Naftaniel, a former director of the Center for Information and Documentation on Israel, cited the fact that to this day, Jews are not explicitly named in the national memorial ceremony on May 4, even though they constitute half of all Dutch casualties during World War II. The ceremony’s official language speaks only of Dutch people who were persecuted for their ethnicity.

To many in Holland, the fight against the erection of the national commemoration monument in Amsterdam symbolizes the problem. The $6 million project features a metal labyrinth designed by the renowned American architect Daniel Libeskind. Its 9-foot metal walls bears the names of approximately 102,000 Holocaust victims.

But last week, newspapers published a petition signed by 54 locals, including some Jews, who oppose the plan. They insist it will mean “the disappearance of the already scarce greenery” from the street that the city set aside for the monument. The critics say they favor commemorating the Holocaust in principle, but the city has not consulted the community and other citizens on the design.

Naftaniel supports the idea of the national monument, but he nonetheless says that its critics have a point.

“It’s a very prominent monument, and that’s appropriate given the magnitude of the crime,” he said. “But not wanting a colossus like that in your backyard isn’t necessarily the result of insensitivity.”

Jacques Grishaver, chairman of the Dutch Auschwitz Committee and the monument’s initiator, says the issue goes far deeper than a dispute over local land use.

“Residents living in houses where my family used to live don’t wish to see a monument commemorating them. They want to erase their names,” he said in a speech in July.

Separately, in recent years the Netherlands has seen another new phenomenon: the commemoration of soldiers who fought for Adolf Hitler, including SS officers.

In 2012 at the national commemoration in Amsterdam, organizers invited a 15-year-old boy to read a poem in memory of his namesake, a relative who had joined the SS. The invitation was rescinded amid a row between the Jewish community and organizers.

Several Dutch towns also commemorate fallen German soldiers on May 4. In 2012, following protests, the town of Geffen dropped plans for a monument that would have included Jewish victims and German war dead on the same slab of stone. 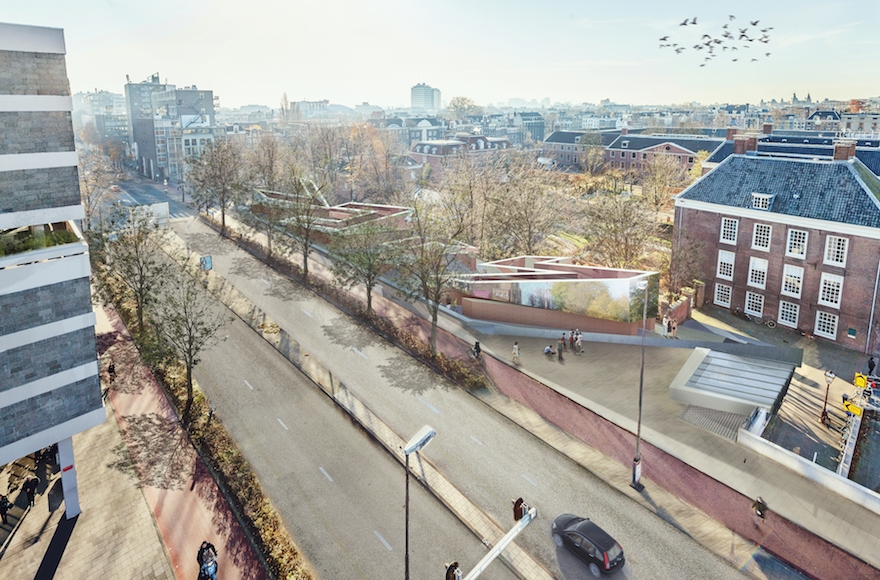 Some think monuments such as the proposed Holocaust Names Monument in Amsterdam, a maze of brick walls that will bear the names of Holocaust victims, are too prominent in public places. (Courtesy of Namen Holocaust Monument Nederland)

To Manfred Gerstenfeld, an Israeli scholar on anti-Semitism who has written extensively on Holland, where he grew up, these issues and the absence of an apology are part of how Holland “refuses to admit its guilt toward the Jews,” he wrote in 2014 in an op-ed in The Jerusalem Post.

The Netherlands has 5,669 Righteous Among the Nations – non-Jews recognized by Israel for having risked their lives to save Jews from the Holocaust. It’s by far the highest figure in Western Europe and the second highest worldwide, second only to Poland’s 6,863 rescuers.

The kingdom also had a fierce resistance movement and with the 1942 February Strike, it became the scene of the first incident of mass public disobedience over the persecution of the Jews.

But it was also a country where the Nazi annihilation of the Jews reached record efficiency with the help of local collaborators.

Soon after the Nazis invaded in 1940, men from a group known as the Henneicke Column began hunting Jews for pay. Led by a cabbie named Wim Henneicke, authorities paid some 80 bounty hunters the equivalent of a week’s pay for every Jew they brought in. This group alone caught thousands of victims.

Anne Frank, the teenager whose diary became one of the world’s best-known testimonies from the Holocaust, and her family may have been betrayed  by Nazi collaborators.

Yet despite this record — or perhaps because of — interest in the Holocaust remains high in the Netherlands.

Awareness of the genocide has only grown in recent years, giving rise to grassroots initiatives like Open Jewish Houses, where homeowners open to the public the former abodes of Holocaust victims who resided there.

This year’s best-watched local film production was a drama about the real-life story of resistance hero Walraven van Hall, whose heroism was in the film rooted in the persecution of Jews.

But even this film is symptomatic of Dutch society’s “unresolved issue” with the Holocaust, says de Winter, the writer.

“Yes, Holocaust stories are popular in the Netherlands,” he told JTA, “but only if they’re polished, cleansed and bleached of the massive guilt this country has yet to come to terms with.”