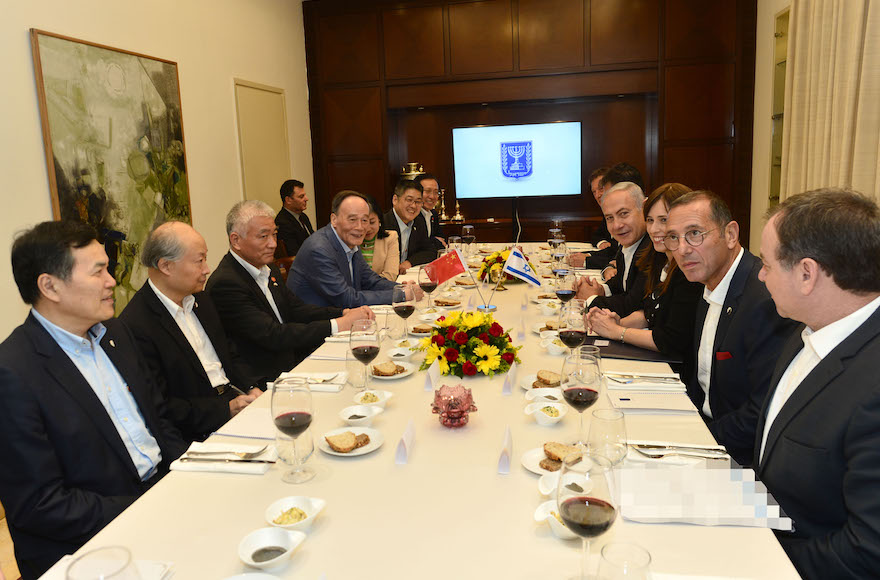 JERUSALEM (JTA) — Chinese Vice President Wang Qishan is visiting Israel for what Israeli Prime Minister Benjamin Netanyahu called ” the most important visit by a Chinese leader in the last 18 years.”

Wang arrived Monday for the four-day visit, which is focusing on the countries’ economic ties. He is the most senior Chinese official to visit Israel since 2000.

Shortly after his arrival, Wang visited the Western Wall and the Church of the Holy Sepulchre, both in the Old City of Jerusalem. He was accompanied to the sites by representatives of Israel’s Foreign Ministry, a first.

On Wednesday, Wang and Prime Minister Benjamin Netanyahu will chair the fourth meeting of the Israel-China Innovation Conference at the Foreign Ministry. Government ministers and deputies from 13 ministries have accompanied Wang on the trip.

Eight joint agreements are scheduled to be signed at the conference in the areas of science and technology, life sciences, innovation, digital health and agriculture.

Netanyahu and Wang held a working dinner on Monday night with their entourages at the Netanyahu’s residence in Jerusalem.

“Welcome to Israel. This is the most important visit by a Chinese leader in the last 18 years,” Netanyahu said in greeting Wang at the residence. “It’s a sign of our growing friendship. The fact that the vice president of China came to Israel at my invitation for the Prime Minister’s Innovation Conference is a tremendous compliment to Israel and a reflection of the growing ties between China and Israel. And I look forward to our discussions.”

Israeli exports to China reached $2.8 billion in the first half of 2018 — 8.7 percent of Israeli exports during the period — the business publication Calcalist reported, citing data from Israel’s Central Bureau of Statistics.