‘Our hearts are broken’: The Jewish world reacts to the Pittsburgh synagogue attack 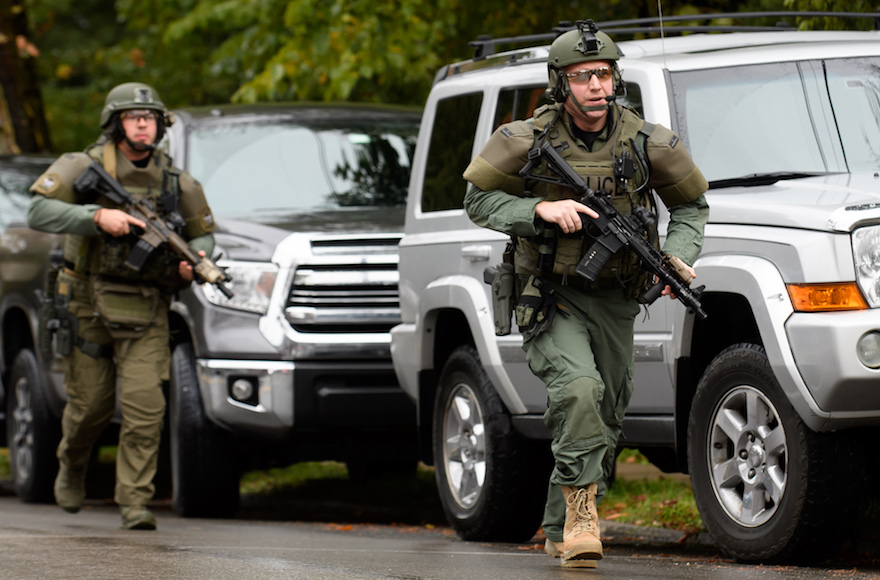 Police responded quickly to the site of a mass shooting at the Tree of Life Synagogue in the Squirrel Hill neighborhood of Pittsburgh, Oct. 27, 2018. At least 11 people were killed. (Jeff Swensen/Getty Images)
Advertisement

(JTA) — The shooting in a Pittsburgh synagogue that has left 11 people dead has been described as “horrific,” “heinous” and “devastating” by Jewish leaders, politicians and Israeli leaders.

“Our hearts are broken,” the Jewish Federation of Greater Pittsburgh posted on Facebook, saying it was making an exception and using social media on Shabbat.

The federation’s president, Jeff Finkelstein, in an interview on CNN praised the quick reaction of the police and local government and said of the shooting, “This is now real. This is my worst nightmare.”

Jerry Silverman, president and CEO of the Jewish Federations of North America, said in a statement: “Our thoughts, prayers and actions are with the entire Pittsburgh Jewish community at the events of today. The peace of Shabbat was shattered and lives tragically lost. All of us stand with our brothers and sisters there.”

Silverman said the Secure Community Network is already working with the synagogue alongside the Department of Homeland Security and the FBI. The security arm for national Jewish groups is affiliated with JFNA and the Conference of Presidents of Major American Jewish Organizations.

The Jewish refugee aid agency HIAS, which was named by the suspected shooter in a series of posts on social media, said in a statement: “There are no words to express how devastated we are by the events in Pittsburgh this morning. This loss is our loss, and our thoughts are with Tree of Life Congregation, our local partner Jewish Family and Community Services (JFCS) of Pittsburgh, the city of Pittsburgh and all those affected by this senseless act of violence. As we try to process this horrifying tragedy, we pray that the American Jewish community and the country can find healing.”

David Harris, executive director of the American Jewish Committee, tweeted: “The news from #Pittsburgh is horrible, just horrible. An attack on a synagogue kills at least 8 people and wounds others. No words are adequate. A demented, bigoted mind that would destroy lives in a house of worship should leave us all speechless, united and angry as hell.”

ADL National Director Jonathan Greenblatt said in a statement that “It is simply unconscionable for Jews to be targeted during worship on a Sabbath morning, and unthinkable that it would happen in the United States of America in this day and age. Unfortunately, this violent attack – the deadliest anti-Semitic attack in the United States since 2014 – occurs at time when ADL has reported a historic increase in both anti-Semitic incidents and anti-Semitic online harassment.”

Greenblatt said in a tweet that the ADL was “actively engaged with law enforcement to understand the extent of this anti-Semitic attack.”

The Hillel Jewish University Center of Pittsburgh in a post on Facebook said it is in contact with staff, university officials and law enforcement to ensure the safety of students. The center said it was planning to open on Shabbat in order to support students and community members “when it is safe to do so.”

Parents responded with comments thanking the center for being available to help their children. One wrote: “So glad that you are there to support our children when we, as parents, are far away and cannot hug them and be with them.”

World Jewish Congress President Ronald Lauder said the attack was not just on the Jewish community but on America as a whole.

“We must condemn this attack at the highest levels and do everything in our power to stop such atrocities from happening again,” Lauder said in a statement.

B’nai B’rith International called it “a devastating day for Jews in this country and around the world.”

“But more than that, it’s another devastating day for tolerance and acceptance,” Charles Kaufman and Daniel Mariaschin, its president and CEO, respectively, said in a statement. “We are living in an unparalleled toxic atmosphere of hate that seems endless. While we welcome politicians’ thoughts and prayers when murderous rages of hate occur, that must be followed by action on many levels. Tolerance and mutual respect, plus sensible gun control – especially for automatic weapons – are needed now.”

Rep. Debbie Wasserman Schultz, D-Fla.,who was the target of a mail bombing campaign in recent days, said in a tweet: “Our houses of worship will never truly be safe until those in power challenge anti-Semitism and the rampant proliferation of guns. My heart goes out to Pittsburgh, its Jewish community, law enforcers and all those impacted by this tragedy on a holy day of worship.”

Our houses of worship will never truly be safe until those in power challenge anti-Semitism and the rampant proliferation of guns. My heart goes out to Pittsburgh, its Jewish community, law enforcers and all those impacted by this tragedy on a holy day of worship. https://t.co/cO8GojJ0YE

“This moment calls for responsible leadership. We must all join together in condemning the rising tide of white nationalism, racism and hatred directed at Jewish people and other vulnerable minorities in our country,” it said in a statement. “And we must call for an end to the extreme rhetoric, laced with bigotry and racism, that is dominating our national discourse and breeding violence.”

The Republican Jewish Coalition’s national chairman, Norm Coleman, said in a statement: “The level of hate in this country is out of control. Today we mourn the dead and stand in awe of the men and women who ran toward the gun fire to help the victims and stop the perpetrator. In the days ahead, we all must come together to combat this epidemic of hate. From the left, the right, and all other corners of our political spectrum, we must come together to find a better path forward.”

Halie Soifer, the executive director of the Jewish Democratic Council of America, said it was clear that congregants at the Tree of Life synagogue were targeted because they were Jews. She said her organization “condemns, in the strongest possible terms, the elevated anti-Semitic, hateful, and divisive rhetoric in our country that has emboldened anti-Semites, neo-Nazis, white supremacists and those who sympathize with these movements.”

Richard Cohen, president of the Southern Poverty Law Center, said the attack “reminds us of the slaughter of nine African American worshipers at Charleston’s Mother Emmanuel Church in 2015, the killings of six Sikh worshipers at a temple in Oak Creek, Wisconsin, in 2014, and, of course, the bombing of Birmingham’s 16th Street Baptist Church in 1963 that left four young African American girls dead. The violence in Pittsburgh follows on the heels of a string of attempted pipe bombings by a white supremacist who targeted frequent critics of President Trump. Our hearts go out to the families of the shootings.”

In Israel, emergency and resilience teams left for Pittsburgh to provide psychological assistance and community rehabilitation, according to the statement.

Prime Minister Benjamin Netanyahu in a videotaped statement said that he was “heartbroken and appalled by the murderous attack” on the Tree of Life synagogue.

President Reuven Rivlin said in a statement that “We are thinking of our brothers and sisters, the whole house of Israel, in this time of trouble, as we say in the morning prayers. We are thinking of the families of those who were murdered and praying for the quick recovery of those who were injured. I am sure that the law enforcement agencies and the legal authorities in the U.S. will investigate this horrific event thoroughly and that justice will be served on the despicable murderer.”

Education Minister Naftali Bennett, who also serves as the country’s Diaspora minister, left for Pittsburgh on Saturday night in Israel shortly after news of the shooting. He will visit the synagogue, meet with the local Jewish community and participate in the funerals of those killed in the attack, a statement from his office said.

“When Jews are murdered in Pittsburgh, the people of Israel feel pain,” Bennett said. “All Israel are responsible for one another.”

He also said that “Jewish blood is not free. I am going to offer strength to the community and its leaders, and to examine how we can offer assistance.”

HIAS, immigrant group vilified by Pittsburgh gunman, vows not to back down