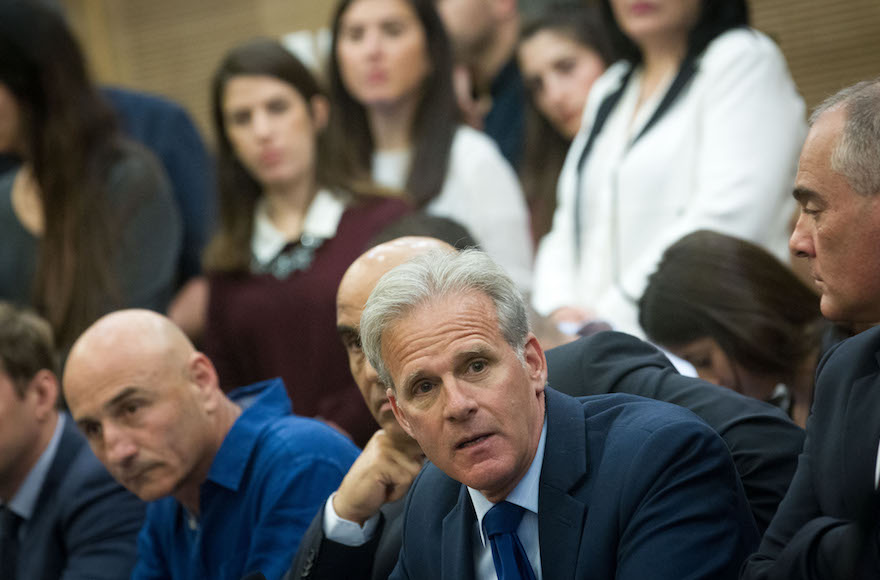 Michael Oren speaks at a conference in the Israeli parliament in 2016. (Miriam Alster/Flash90)
Advertisement

(An earlier version of this story referred incorrectly to an interview with Rabbi David Lau saying that he declined to refer to the Tree of Life Congregation in Pittsburgh as a “synagogue.” In fact, he did refer to it as a synagogue in the interview.)

JERUSALEM (JTA) — The deadly shooting at a Conservative synagogue in Pittsburgh has underlined tensions in Israel over the haredi Orthodox rabbinic establishment’s disenfranchisement of the Diaspora’s non-Orthodox Jewish streams.

Following Saturday’s rampage by a gunman that left 11 worshippers dead, an Israeli government minister and the country’s opposition leader both called on Israel to recognize the liberal streams of Judaism.

Others criticized the haredi Orthodox media in Israel for not calling the Tree of Life Congregation, the site of the attack,  a synagogue in their news reports, instead using the term “Jewish center.” Sephardic Chief Rabbi Yitzhak Yosef, in a heartfelt statement about the attack, also referred only to “the murder of innocent Jews in Pittsburgh, Pennsylvania,” without saying where it took place.

Prime Minister Benjamin Netanyahu in a tweet Monday appeared to join in the criticism of such omissions.

In a tweet Sunday morning, Deputy Minister Michael Oren, a former Israeli ambassador to the United States, said: “The Conservative Jews of Pittsburgh were sufficiently Jewish to be killed because they were Jews but their movement is not recognized by the Jewish State. Israel must bolster these communities, already challenged by assimilation, by strengthening our ties with them.”

The American-born Oren, in a Hebrew tweet, added: “I call on Minister Bennett not to suffice with condolences, but to recognize liberal Jewish streams and unite the people.”

He was referring to the fact that Education Minister Naftali Bennett, who also serves as Diaspora minister, flew to Pittsburgh in order to visit the synagogue, meet with the local Jewish community and participate in the funerals of the victims.

Speaking Sunday night at a vigil in Pittsburgh, Bennett said, “We stand together, as Jews from all communities united, as well as members of all faiths. Together we stand. Americans, Israelis. People who are together saying ‘no’ to hatred. The murderer’s bullet does not stop to ask: Are you Conservative or Reform, are you Orthodox? Are you right wing or left wing? It has one goal, and that is to kill innocent people. Innocent Jews.”

Israel’s haredi Orthodox Chief Rabbinate is largely in control of religious affairs in Israel, and does not recognize the Conservative and Reform movements as legitimate Jewish streams. They do regard their followers as Jews if they otherwise are Jewish under halachah, or Jewish law. The non-Orthodox movements have long objected to their disenfranchisement in Israel, and have called on the Israeli government to recognize their movement and its rabbis for issues like marriage, burial and conversion to Judaism.

Israel’s Ashkenazi Chief Rabbi David Lau was pulled into the debate Sunday by an interviewer for the Modern Orthodox Makor Rishon newspaper. The interviewer asked Lau about the haredi media’s refusal to name non-Orthodox synagogues, and Lau seemed at pains to distance himself from their policy.

Lau replied that he doesn’t speak for the media, and that he often disagrees with what they do and write.

“I repeat and say: We are speaking about Jews and we need not take advantage to raise our painful differences,” the rabbi said. “I have an ideological dispute with them about Judaism, about the past and the future of the Jewish people throughout the generations.

“But,” he added, speaking rhetorically, “because of this they are not Jewish?”

Haaretz, The Washington Post and JTA later reported that Lau himself declined to refer to Tree of Life as a “synagogue,” although in the Makor Rishon interview he does say “They were killed because they were Jews. Does it matter in which synagogue [‘beit knesset’ in Hebrew] they pray in or what text they use ?”

Yosef, Lau’s Sephardi counterpart, did not refer to the synagogue in his statement.

“I was shocked to hear about the murder of innocent Jews in Pittsburgh, Pennsylvania, simply because they were Jews, by an abhorrent murderer who was driven by anti-Semitic hatred,” he said. “My heart is with the bereaved families and with all of our Jewish brothers and sisters who live in the U.S.”

Yosef also called for prayers for their well being.

In an interview in The Washington Post, Rabbi Rick Jacobs, president of the Union of Reform Judaism, was critical of Jews who would not refer to Tree of Life as a synagogue.

“This tragedy should bring all Jews together, not rip us further apart.”

He added, “It’s unconscionable that any rabbi worth their name would question the Jewishness of those worshipping on Shabbat in a synagogue shattered by murder and the blood of Jews.”

The issue of Jewish religious pluralism in Israel has driven a wedge between Israel and the Diaspora. Earlier this month, those strains were a theme of the General Assembly, a meeting in Tel Aviv of leaders of North American Jewish federations. Among the recent flash points: Last year, in addition to scrapping  a compromise that would have expanded non-Orthodox prayer at the Western Wall, the government moved to give the Chief Rabbinate more power over Jewish conversion. This year, Israeli police detained a Conservative rabbi for the crime of performing a non-Orthodox wedding.

Opposition leader Avi Gabbay, in an interview with Ynet, this week also called on the government “to embrace the Reform and Conservative movements and to pass the Western Wall plan” for an egalitarian prayer space.

Yair Lapid, leader of the opposition party Yesh Atid, echoed Gabbay and Oren in calling for recognition of the liberal streams of Judaism.

“If you are murdered because you are a Jew, then you are a Jew,” he said in a statement also posted on Facebook. “The Conservative and Reform are our brothers. They are our family.”

Gabbay, however, also touched a third rail of Israel-Diaspora relations when, reacting to the synagogue shooting, he called “upon the Jews of the United States to immigrate more and more to Israel because this is their home.”

Many Jews in the Diaspora bristle when Israeli leaders suggest that they would be safer or happier in Israel.

Oren responded to the call for immigration, tweeting in Hebrew: “Avi Gabbay said things that should not be said because he simply does not understand. Through his words he adds insult to injury. The call to U.S. Jewry, especially after last night, deeply hurts their feelings and reduces their desire for aliyah. Gabbay does not understand anything about Israel’s relationship with the Diaspora.”