To feel safe, Jews need a government that says and does the right thing 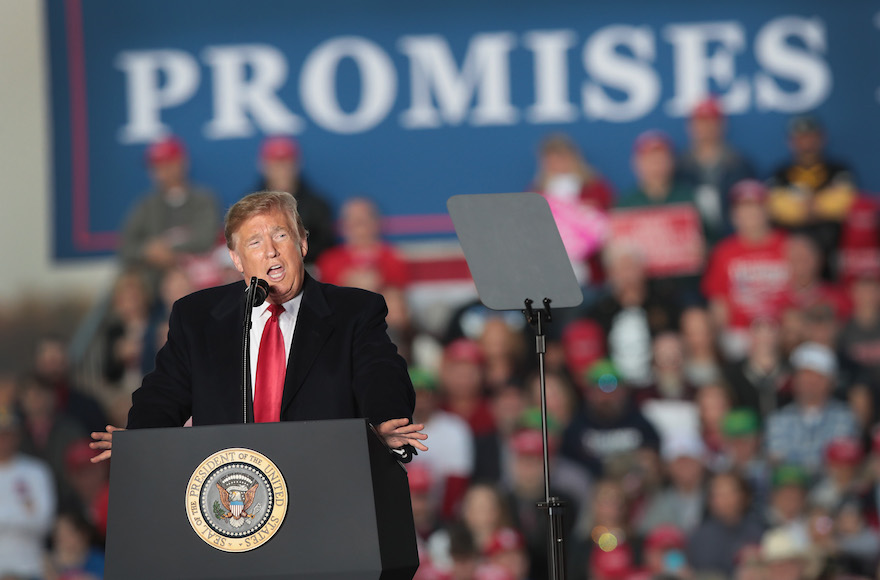 NEW YORK (JTA) — Saturday morning a friend was in from Israel, and I took him to one of the many synagogues in my neighborhood. He was surprised by the police car parked out front, the bollards protecting the main entrance, the congregants with walkie-talkies keeping an eye on the door.

“What does this say about American Jewry?” he asked.

I didn’t know what to tell him, only that a lot synagogues in town have beefed up their security in recent years. Some people call it overkill; others insist you’re better safe than sorry.

A few hours later came news of the horror at Tree of Life Congregation in Pittsburgh, where 11 people were shot dead during morning services and a 46-year-old white male with an apparent anti-immigrant beef and hatred of Jews had been taken into custody.

In a week in which a crazed Trump fan was arrested for sending pipe bombs to liberals and CNN, and a year in which there were over 150 mass shootings, I am not sure what any of this says about “American Jewry.” The Anti-Defamation League called the synagogue shooting the deadliest anti-Semitic attack in U.S. history, from which it is possible to derive a measure of comfort: Until now, American Jewish institutions were spared the kind of mass tragedies that have invaded the sanctity of churches, universities, high schools, elementary schools, country music concerts, fast food joints and municipal buildings. The Pittsburgh shooting isn’t evidence that America has a Jewish problem, or even a far-right problem, although it has both. But there is no doubt that we have a mass shooting crisis, amplified by the ease of obtaining assault weapons.

When it comes to reducing political divisiveness and healing national divisions, it also has a leadership problem, starting at the top.

I think it is premature to draw a straight line between President Donald Trump’s fear-mongering and anti-immigrant rhetoric and the Pittsburgh shooting, or his repeated demonization of his critics and the mail bombs sent to several of them last week. But the fact that the alleged perpetrators echoed some of his most passionate attack lines should be enough to convince a president to modify his language and behavior.

Saturday’s response to the shooting was a good start, when he said in a prepared statement that the massacre was “pure evil” and “an anti-Semitic act.” He added that “anti-Semitism and the widespread persecution of Jews represents one of the ugliest and darkest features of human history.”

You are tempted to say, Now that wasn’t so hard, was it? But give credit where credit is due. Vice President Mike Pence also gave a strong statement. They were remarks that Jews need to hear, to know that they are not alone in fighting hatred and have an ally in the White House. It may not win Trump a single vote in the Jewish community he hasn’t gotten already, but it’s the job description nonetheless.

It’s easy to get burned when encouraging Trump, considering how often he’ll send a tweet or rile a rally crowd with a quote that contradicts the normal and measured thing he said even a few hours earlier. Many Jews will demand consistency in words and deeds in the fight against anti-Semitism.

And they’ll also demand consistency when it comes to the fight against all kinds of hatred, whether directed against women, or transgender people, or gay people, or Hispanics. On the Tree of Life website, the synagogue’s rabbi, Jeffrey Myers, has used his blog to advocate for the rights of immigrants, justice for the victims of clergy abuse and, heartbreakingly, sensible gun control and mental health care.

In the past year there has been a cottage industry of books and essays mocking the liberal American Jewish impulse for “tikkun olam,” or social action, suggesting that the religion of American Jews is not Judaism but liberalism. Defiant in the face of such criticism, time and again synagogue social action committees like Tree of Life’s are about building coalitions with minorities and the marginalized. They sense, rightly, that attacks on one religion or group give license to and normalize attacks on others. It is Hillel’s adage —  “If I am not for myself, who will be for me? If I am only for myself, what am I?” — as a way of being Jewish in an open society.

What will many Jews — not to mention many Americans — “want” in the wake of Pittsburgh? An administration that stops othering people, for starters.

Will that stop the next attack, whether it is on a synagogue or a mosque or the home of a liberal politician? There are no promises. But respecting the dignity of all Americas, all religions and all people isn’t a law enforcement technique. It’s an ethos, and one that honors what is best about America. We don’t have to prove that the president’s rhetoric caused the Pittsburgh massacre or empowered a Florida man to send pipe bombs to Trump’s frequent targets. We deserve civility for its own sake, starting with the highest office in the land.

That, however, sounds like the long game, especially with the midterms just days away and political rhetoric on both sides at a fever pitch. Many Jews will feel safer if the White House somehow becomes a kinder, gentler place. But until then, security is going to dominate the Jewish communal conversation. On Saturday afternoon I visited a Jewish-run assisted living center near my home; three hours after the Pittsburgh attack, the had already held a security meeting with residents and hired a private guard at its front entrance.

Jewish institutions have gradually strengthened their security in response to 9/11, to shootings in California and Kansas Ciity, to rumblings from the Middle East. The federation movement has a security network, ADL provides guidance, the federal government offers grants. Nonprofits have helped synagogues beef up their security.

But American synagogues still don’t look like their European counterparts, where armed guards wield automatic rifles or park outside in armed vehicles. On a recent trip to Portugal I couldn’t get into a synagogue for Friday night services without making a reservation.

After the  grieving, after Jews in Pittsburgh come to grips with the incalculable loss of loved ones and friends, the question will quickly turn to how Jews want to live their public Jewish lives. Synagogues and JCCs want to be as welcoming as possible. That becomes harder when members and guests have to walk a gantlet, or feel defensive when even a friendly shomer begins asking questions.

What does this say about American Jewry? That they want to keep their doors and arms wide open.

And that they want a government that makes them feel safer, through words and deeds.