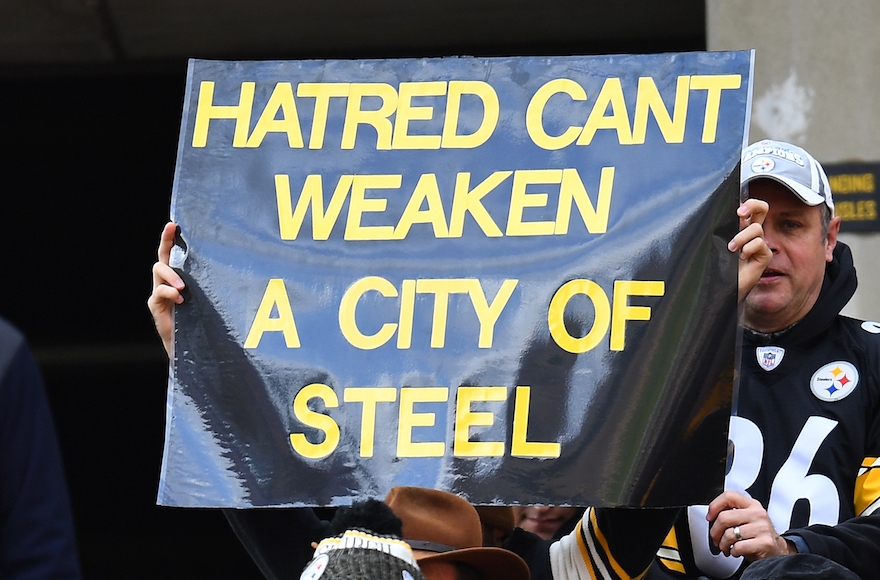 A fan holds up a sign to honor the victims of the shooting at the Tree of Life Synagogue during the game between the Pittsburgh Steelers and the Cleveland Browns at Heinz Field in Pittsburgh, Oct. 28, 2018. (Joe Sargent/Getty Images)
Advertisement

(JTA) — The Pittsburgh Steelers held a moment of silence at their home field in honor of the victims of the shooting at a local synagogue, prior to the start of its game against the Cleveland Browns.

The moment of silence before Sunday afternoon’s football game at Heinz Field was not televised by CBS Sports, however. The Steelers won the game against its AFC North rival by a score of 33 to 18.

On Saturday following the shooting at Tree of Life Congregation, which left 11 worshippers dead, the team’s logo was edited to include a Star of David, next to the words, “Stronger Than Hate.”

The image was held on posters by fans during the game, as well as signs reading Shalom under a Star of David, and “Pittsburgh Strong.”

Prior to the game, Steelers President Art Rooney II released a statement offering on behalf of the entire Steelers organization “support and condolences” to the families of the victims.

“Our hearts are heavy, but we must stand against anti-Semitism and hate crimes of any nature and come together to preserve our values and our community,” he also wrote, noting that there would be a “moment of silence and prayer” prior to the game.

The city sports teams the Pirates and Penguins also tweeted “stronger than hate” before the start of the Steelers game.