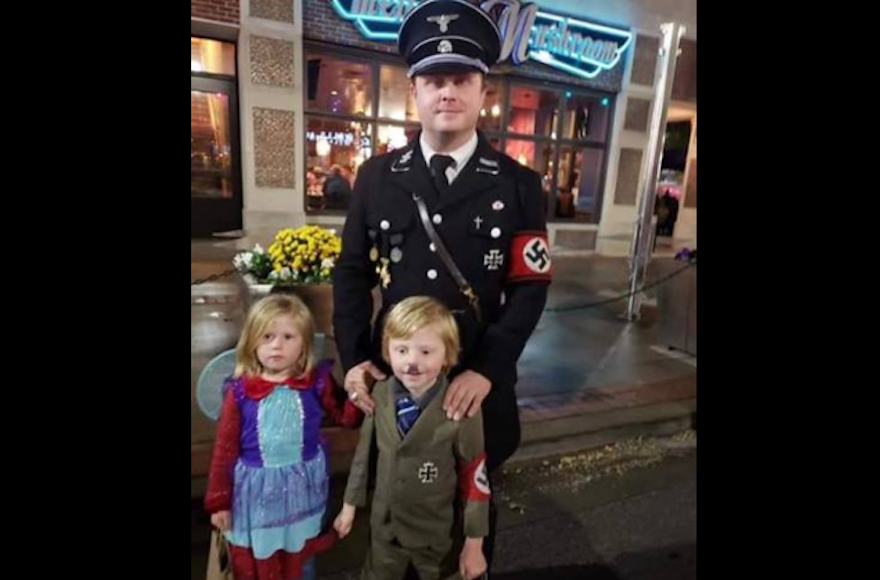 (JTA) — A Kentucky man dressed his 5-year-old son as Adolf Hitler and himself as a Nazi soldier for a Halloween event.

Bryant Goldbach eventually admitted it was in “bad taste” but said he did not realize the costumes would cause so much controversy.

Prior to the acknowledgement, he wrote in a Facebook post how upset he was that his son was threatened over his costume and lashed out at liberalism and the “so called ‘Tolerant Left.'”

In the post, Goldbach said he and his family love history and often dress as historical figures.

“We saw people dressed as murderers, devils, serial killers, blood and gore of all sorts. Nobody batted an eye,” he said. “But my little boy and i, dress as historical figures, and it merits people not only making snide remarks, but approaching us and threatening my little 5 year old boy. … Yes liberalism is alive and well. And we had the displeasure of dealing with the fruits of the so called ‘Tolerant Left.’ ”

A photo of Goldbach and his son went viral on social media, resulting in negative criticism.

Goldbach, whose Facebook page reportedly included slogans in support of “white pride,” later acknowledged in an interview with the Indiana ABC affiliate WEHT that “I think it was in bad taste for me to let my child to wear that, probably for me to wear that. It didn’t occur to me. I thought it was a bad decision on my part.”