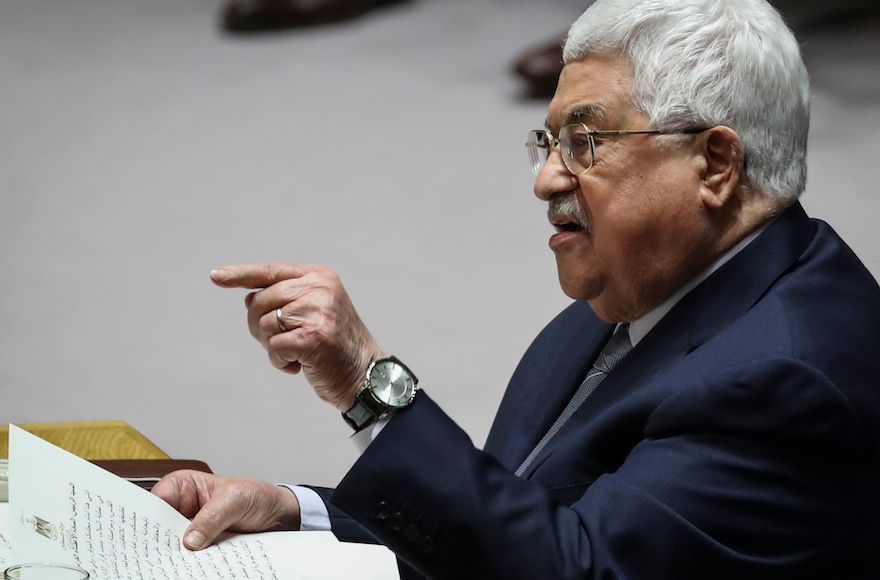 JERUSALEM (JTA) — A PLO decision-making body passed a motion to suspend its recognition of Israel until Israel recognizes a Palestinian state.

Monday night’s decision by the Central Committee would bring an official end to the Oslo Accords signed in September 1993. However, the decision is nonbinding, the official Palestinian Authority news agency WAFA reported, and requires the approval of P.A. President Mahmoud Abbas.

The motion also ends Palestinian security cooperation with Israel and backs Abbas’ opposition to any peace deal presented by the Trump administration. The committee’s statement also stressed “our right to resistance by all means as per international law.”

The Central Committee said that the Palestinians “suspend recognition of the State of Israel until its recognition of the State of Palestine on the June 4, 1967 borders with East Jerusalem as its capital, end security coordination in all its forms, and disengage economically from Israel on the grounds that the transitional phase, including the Paris Economic Protocols no longer exist,” WAFA reported.

In its decision, the Central Committee also expressed support for Abbas’ “opposition to the U.S. administration’s so-called (peace) Deal of the Century, accusing the U.S. of siding with the Israeli occupation and of being ‘part of the problem and not part of the solution,'” according to WAFA.

Saeb Erekat, secretary general of the Executive Committee of the Palestine Liberation Organization and chief Palestinian peace negotiator, said that severing ties with Israel would be done gradually, WAFA reported.

Israel and the Palestinian Authority signed eight agreements between 1993 and 1999. Israel and the PLO exchanged a series of official letters of recognition between the government of Israel and its Prime Minister Yitzhak Rabin and the PLO’s chairman, Yasser Arafat, dated Sept. 9, 1993.