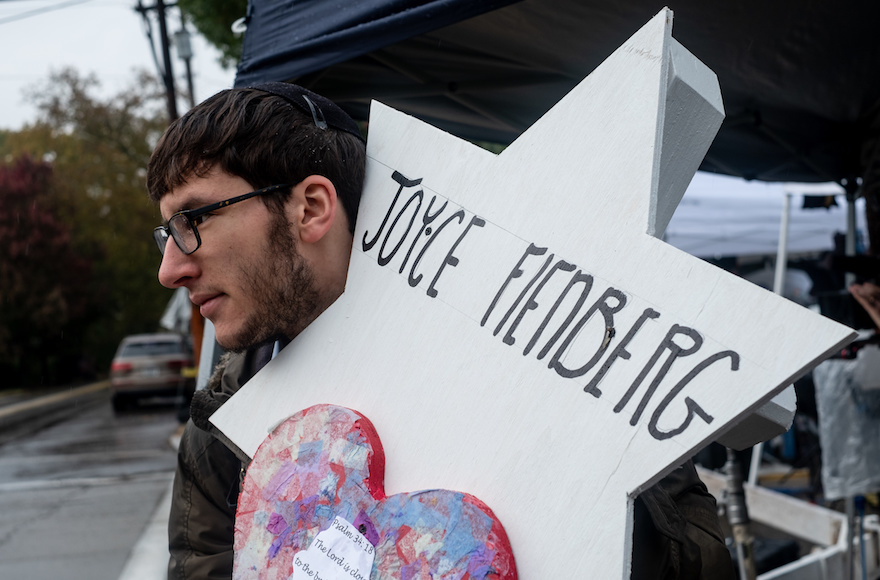 A mourner carrying a temporary grave for Joyce Fienberg, who was killed in the synagogue shooting in Pittsburgh, Oct. 28, 2018. (Aaron Jackendoff/SOPA Images/LightRocket via Getty Images)
Advertisement

(JTA) — Joyce Fienberg was a dedicated worshipper at the Tree of Life Congregation, the Pittsburgh synagogue where she was among 11 killed Saturday by a lone gunman.

Hundreds of mourners attended the funeral Wednesday for Fienberg at Beth Shalom Congregation on Beacon Street in the Squirrel Hill neighborhood, located blocks away from the Tree of Life Congregation. Her son Anthony came with his family from Paris. Haim Korsia, the chief rabbi of France, also attended along with rabbis from Washington, D.C., and other communities, the Pittsburgh Herald-Tribune reported.

“My mom would be very angry that her funeral wasn’t able to be at Tree of Life, and that her friends lost Saturday couldn’t be here,” her son Howard, of Virginia, said at her funeral Wednesday. He also recalled that “Tree of Life became a refuge for her” after the death of her husband and that she refused to move closer to either of her sons after his death, electing to stay near her synagogue, where she felt support.

Her funeral was the first of three for victims held Wednesday. Three others were laid to rest on Tuesday.

Fienberg, 75, a Toronto native who lived in several American cities before settling in Pittsburgh, was remembered at the service as being attentive to the needs of others.

“My heart hurts — my sister is dead, my sister was murdered,” said Fienberg’s brother, Robert Libman, of Toronto. “She was my role model all my life. Her thoughts and words were of pure intent. She gave life to all she came into contact with. In the end, a life of pure giving is a life well lived. In her death, we owe it to ourselves to try to measure up. Evil tries to shut off the light, but the light refuses to be dimmed. The light is still in our hearts —even our broken hearts.”

Fienberg retired after 30 years in 2008 as a researcher at the University of Pittsburgh’s Learning Research and Development Center, which looks at learning in the classroom and in museums. Her husband, Stephen, was professor emeritus at Carnegie Mellon University, in the Squirrel Hill neighborhood, before his death in December 2016. She had six grandchildren ranging in age from 8 to 15.

Her daughter-in-law, Marney Fienberg, is co-president of Hadassah North Virginia.