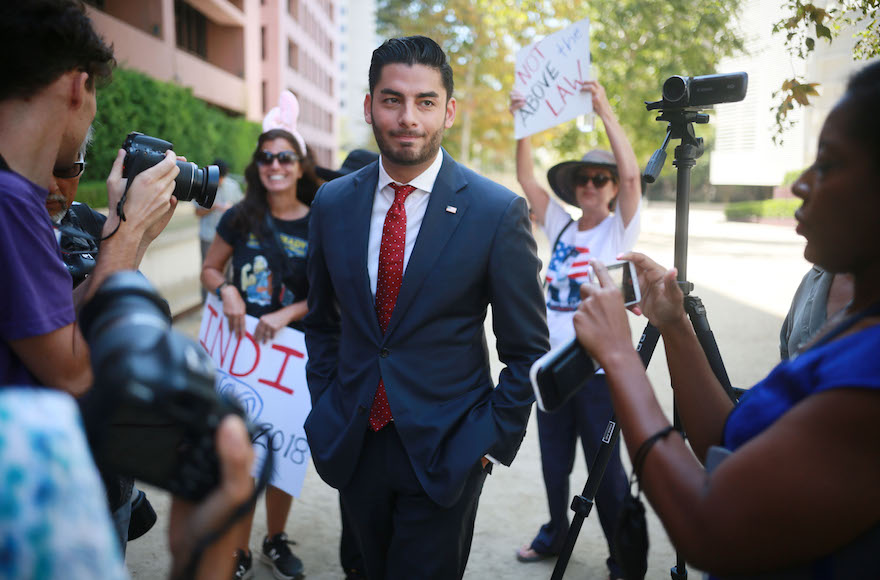 Ammar Campa-Najjar, who is running against Congressman Duncan Hunter, R-Calif., speaks to reporters outside the San Diego Federal Courthouse during Hunter's arraignment hearing, Aug. 23, 2018 in San Diego, CA. Hunter and his wife Margaret, who pled not guilty, are accused of using more than $250,000 in campaign funds for personal use. (Sandy Huffaker/Getty Images)
Advertisement

(JTA) — San Diego-area rabbis have denounced attacks against a candidate with Palestinian ancestry by his Republican opponent.

Rep. Duncan Hunter has called his Democratic challenger Ammar Campa-Najjar a “national security risk,” and accused him of being an “Islamist.”

“As rabbis and leaders of the Jewish community in the San Diego area, we are deeply disturbed by Duncan Hunter and his campaign’s personal attacks on Ammar Campa-Najjar. These attacks are not rooted in facts or in serious policy disagreements, but in appeals to racism, bigotry and fear. Campa-Najjar is a Christian, not a Muslim, and not affiliated with any radical group. Campa-Najjar is not a security risk, he received a security clearance when he worked for the Obama administration,” the letter issued on Wednesday said.

The 17 rabbis, members of the Renewal, Reform, Conservative and Reconstructionist movements, noted that the statement was not an endorsement of one candidate over the other and encouraged debate with “honesty and civility.”

Campa-Najjar was born in San Diego and is Christian. His grandfather was Muhammad Yusuf al-Najjar, a mastermind of the terrorist murder of 11 Israeli Olympic athletes and coaches at the 1972 games in Munich, Germany. Campa-Najjar, who lived for a time as a youth in the Gaza Strip, has rejected his grandfather’s terrorism.

Campa-Najjar, who never met his grandfather, told Haaretz earlier this year that he would “never be able to understand or condone” his  grandfather’s actions and said that there is “never justification for killing innocent civilians.”

“These false fear mongering claims undermine important Jewish values including the commitment to tolerance, honesty and respect. In light of the recent tragedy of Pittsburgh we feel compelled to speak out against hate speech wherever it occurs. In the Talmud (Yevamot 87b) we read the rabbinic wisdom that silence in the face of accusatory testimony is tantamount to consent,” the rabbis also wrote.

Hunter is seeking his sixth term, in a seat that previously was held by his father for 28 years.