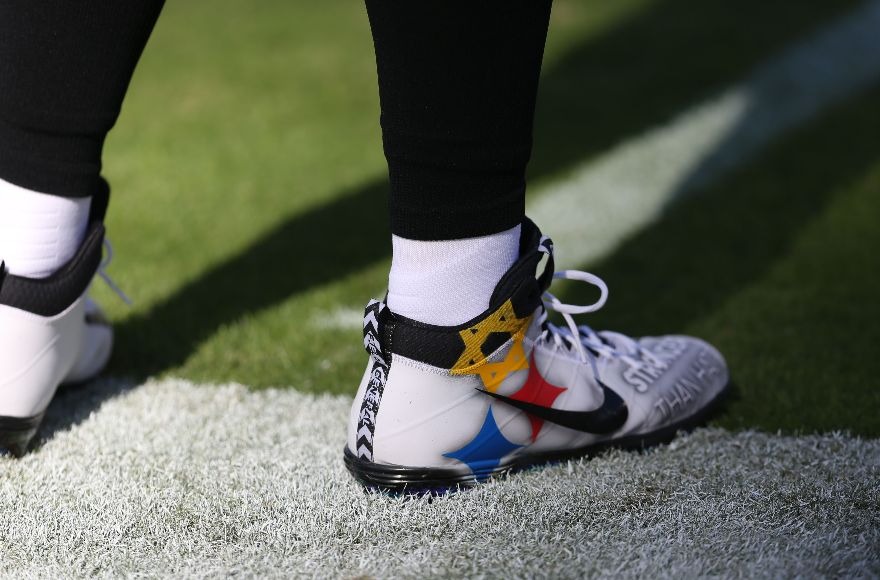 Steelers quarterback Ben Roethlisberger wears cleats Sunday to honor the victims of the Pittsburgh synagogue shooting during the Nov. 4, 2018 game against the Baltimore Ravens. (Will Newton/Getty Images)
Advertisement

The cleats included the image of the Steelers’ logo and was redrawn to include a Star of David and the phrase “Stronger than Hate.”

The Steelers defeated the Baltimore Ravens 23-16. The day after the shooting the Steelers held a moment of silence before their game with the Cleveland Browns.

Roethlisberger is close with Michele Rosenthal, the sister of the two brothers killed in the shooting, ESPN reported. Rosenthal worked with the Steelers’ community relations and with Roethlisberger’s foundation. Roethlisberger and dozens of current and former players and coaches had attended the funeral on Thursday, Yahoo Sports reported.

The Pittsburgh Penguins wore Stronger than Hate patches on their jerseys for last week’s matches. The players autographed their jerseys, which later were auctioned off to benefit the Jewish Federation of Greater Pittsburgh and a fund established by the City of Pittsburgh Department of Safety to benefit police officers wounded during the attack.

Also on Sunday, New England Patriot’s wide receiver Julian Edelman appeared at his postgame interview wearing a blue baseball cap featuring a Star of David with an “I” in it, the logo of Israel’s national baseball team.

Julian Edelman explains his hat and why he is wearing it: To show support to Pittsburgh and the Jewish Community. pic.twitter.com/XsodGEVBRG

Edelman, who is Jewish, said of the hat: “You know, it’s just to let the people out in Pittsburgh know that I’m thinking about them, sending vibes. They’re in our prayers. That was a big hit to our community and it’s uncalled for. So, I just let them know I’m behind you, I’m supporting.”

After the shooting, he had tweeted that his heart was “broken for the families in Pittsburgh.”

My heart is broken for the families in Pittsburgh. It’s hard to even imagine such senselessness. As a Jew, an American and a human, I’m devastated. We are with you, Pittsburgh. #treeoflifesynagogue