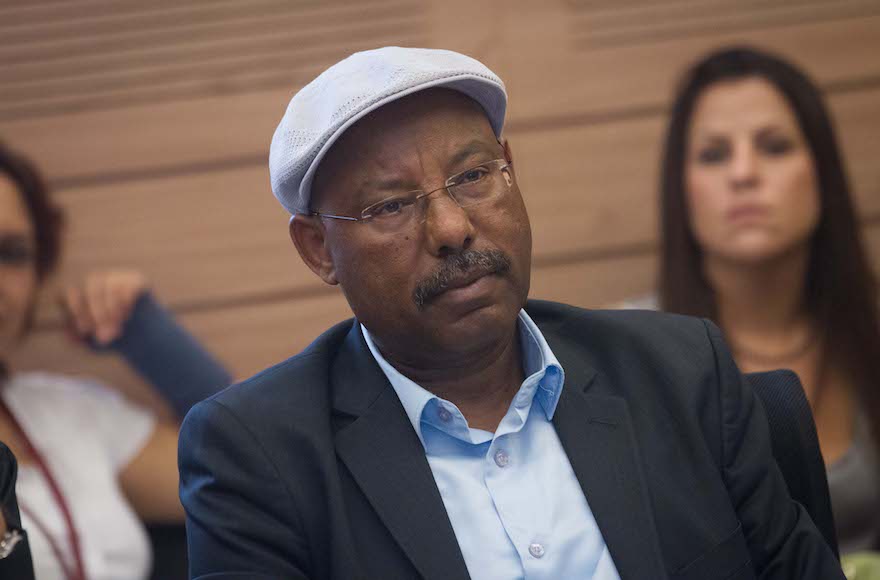 JERUSALEM (JTA) — In the wake of the deadly shooting Oct. 27 at a Pittsburgh synagogue, Israeli lawmakers gathered for a special meeting for a discussion of anti-Semitism in America.

It was dialogue that at times grew heated: Politicians yelled at each other and argued about the definition of anti-Semitism, the occupation and the movement to boycott Israel, or BDS. What they didn’t do was hear from the American Jews at the hearing.

Last week’s murder of 11 Jews at the Tree of Life synagogue prompted not just anguish here and in the United States, but a series of debates between and about Israel and the Diaspora. Some accused senior Israeli officials who attended commemorations in Pittsburgh of using the occasion to support President Donald Trump. The officials suggested in response that American Jews were being unfair in holding Trump, a close ally of Israel, responsible for the climate in which the shooter became radicalized.

American and Israeli Jews also disagreed among themselves and with each other about what represents the biggest threat to American Jews: anti-Semitism on the far-right or virulent anti-Israelism on the far left.

That was the backdrop as the Knesset’s Immigration, Absorption and Diaspora Committee met on Monday.

At one point, Mossi Raz of the left-wing Meretz party angrily asked Committee Chair Avraham Neguise, who had spoken about anti-Semitism in the Boycott, Divestment and Sanctions movement, if he thought that Raz was an anti-Semite because he supports a settlement boycott.

While representatives of the Jewish Federations of North America, the American Jewish Committee and the Anti-Defamation League attended the session, none of them addressed the Israeli lawmakers. Instead, the committee heard from the International Fellowship of Christians and Jews, which largely raises funds for Israel among evangelical Christians, and the Israeli Jewish Congress, or IJC.

“I don’t have any answers and moreover, if I did, do not think it is appropriate for me, for us, as Israelis, to dictate or offer solutions,” IJC Executive Director Arsen Ostrovsky told the lawmakers. “We need to be here first and foremost to show our unity and solidarity. When I spoke with colleagues, partners and other Jewish leaders in America, asking what message can we convey to you here today, the response was a resounding ‘Listen, listen, listen. Please listen to us.’”

While the lawmakers did not hear from their American coreligionists, several including Nachman Shai of Labor issued calls for Israeli action against anti-Semitism, stating that “the state must act and protect Jewish communities around the world.”

However, few if any concrete proposals were put forward. Several attendees, including government and civil society representatives, described the meeting as a waste of time, noting a few issues that did not come up: Trump’s divisive rhetoric,  his failure to appoint a White House Jewish liaison and the long-promised and still delayed appointment of a U.S. special envoy to monitor and combat anti-Semitism.

Under Prime Minister Benjamin Netanyahu, the Israeli government has been “very shy of criticizing the administration,” opposition Knesset member Ksenia Svetlova complained. She called on Netanyahu to be more outspoken on the tenor of the discourse in the United States and other countries, especially in Eastern Europe.

“We have to be more firm in our statements regarding what is happening, what we expect,” Svetlova said. “Our government is just shutting up.”

While Israel cannot be expected to provide physical security for Jews abroad, it can use its good relations with counterparts to “pressure the relevant governments to provide more security, the sense of security, not only by putting armed guards and more weapons to these places, but by providing the sense that we are not going to let these maniacs continue what they are doing,” she told JTA.

A Jewish emergency crew and police officers at the site of the mass shooting at the Tree Of Life synagogue in Pittsburgh, Oct. 28, 2018. (Jeff Swensen/Getty Images)

While he was unable to attend, U.S. Ambassador to Israel David Friedman sent the committee a letter calling the Trump administration “fully committed to combating anti-Semitism wherever it exists.” The FBI, he wrote, was cooperating with the Israelis to “identify and stop those who would terrorize or threaten Jewish people in the United States, whether those threats come from within the United States, from here in Israel, or elsewhere in the world.”

Former Knesset member Dov Lipman was at the Israeli discussion and said he was taken aback by the lack of American speakers. He told JTA that the way for Israel to become involved should be by asking “‘how can Israel help you’ and not projecting and suggesting what they need. There needs to be a dialogue.”

Former U.S. Ambassador to Israel Dan Shapiro, who recently wrote an op-ed in the Forward telling Israelis that their “job is to listen,” did not attend the meeting, but agreed with this general idea.

“The events of Pittsburgh and the aftermath underscore the importance of a dialogue between Israel and American Jews that is respectful and characterized by listening in which Israelis don’t insert themselves into American politics,” he said.

Israelis, Shapiro said, should not get involved in criticizing specific policies, like the White House’s decision last year to remove the scrutiny of white supremacist groups from a government program designed to counter violent extremism.

“These are issues Americans have to work out for themselves,” Shapiro said. “What is most helpful after Pittsburgh is solidarity, support and sympathy.”

Avital Leibovich, director of the American Jewish Committee in Israel, said that she and the other Americans were not stifled in the Knesset.

“In my experience, if they had wanted to say something, they would have,” she said of her colleagues.

Asked why his committee did not hear from the American Jewish community, Neguise replied that “whoever requested to speak” was given a platform, noting that at the end of the hearing an ADL representative had declined to make any remarks. Naguise’s request seemed to take the ADL representative by surprise, suggesting that the Americans had not been invited ahead of time.

Lipman, however, thinks that the silence of the Americans may just be a sign that “they prefer not to be having this discussion with us right now, and that is also fair. I just think it’s critical that we be sensitive to be following their lead and not imposing ourselves on them in any manner.”

Asked about the Israeli response to the Pittsburgh attack, Rebecca Dinar, a spokeswoman for the Jewish Federations of North America, told JTA that American Jews had “just experienced the worst attack in our history and we cannot be distracted by the very real issues we are dealing with.”

“Our elected officials and good people everywhere must work together towards the day when no community is vulnerable to such attacks,” she said. “Anti-Semitism, racism and xenophobia are contagions that infect societies and end in tragedy, not only for Jews, but for all humanity. No one in America should rest until the last remnant of such hatred is eradicated.”