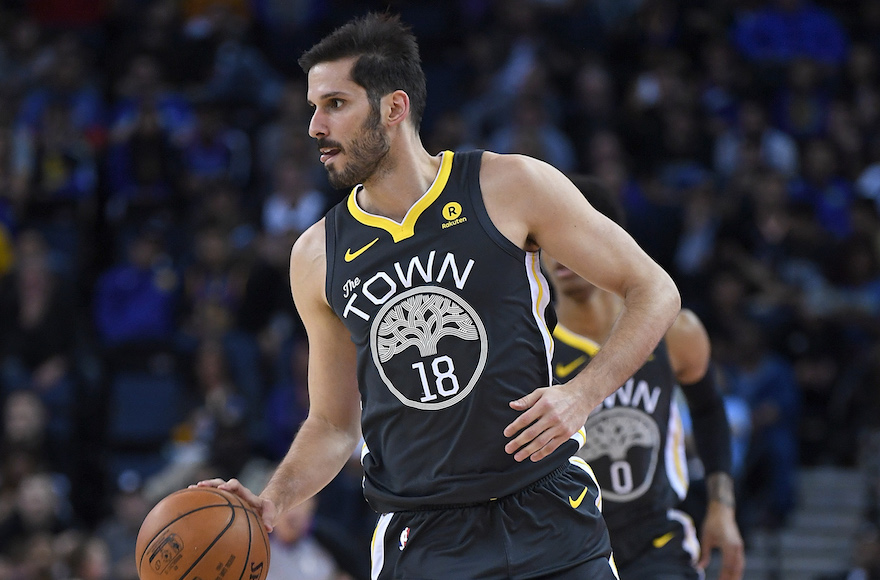 Omri Casspi #18 of the Golden State Warriors dribbles the ball up court against the Oklahoma City Thunder during the second half of their NBA basketball game at ORACLE Arena in Oakland, Calif., Feb. 6, 2018. (Thearon W. Henderson/Getty Images)
Advertisement

(JTA) — Omri Casspi, the first Israeli to play in the National Basketball Association, received his championship ring from the Golden State Warriors despite being cut from the team before last year’s NBA Finals.

Casspi was presented with the ring on Monday night by General Manager Bob Myers in Oakland before the start of the game between Golden State and the Memphis Grizzlies. Casspi is playing for the Grizzlies on a one-year contract.

The 6-9 forward did not suit up for the game due to knee soreness.

Casspi played in 52 regular season games last season for the Warriors and averaged 5.7 points, 3.8 rebounds and one assist. He was waived in April by the team, where he was under a one-year contract, after suffering an ankle injury and to allow the Warriors to bring in another point guard with All-Star Stephen Curry sitting out the first round of the playoffs due to injury.

“I enjoyed coaching Omri,” head coach Steve Kerr told the San Francisco Chronicle. “He really fit our style well. He’s such a great cutter. I enjoyed watching him play with our other guys because of his ability to read different situations and back cut.”

Casspi is playing in his 10th season in the NBA. He has also played for the Sacramento Kings, where he was a No. 1 draft pick, as well as the Cleveland Cavaliers, Houston Rockets, New Orleans Pelicans and Minnesota Timberwolves.

He was a member of the championship Maccabi Tel Aviv team in Israel before making himself available for the NBA draft.