5 Jewish takeaways from the midterm elections 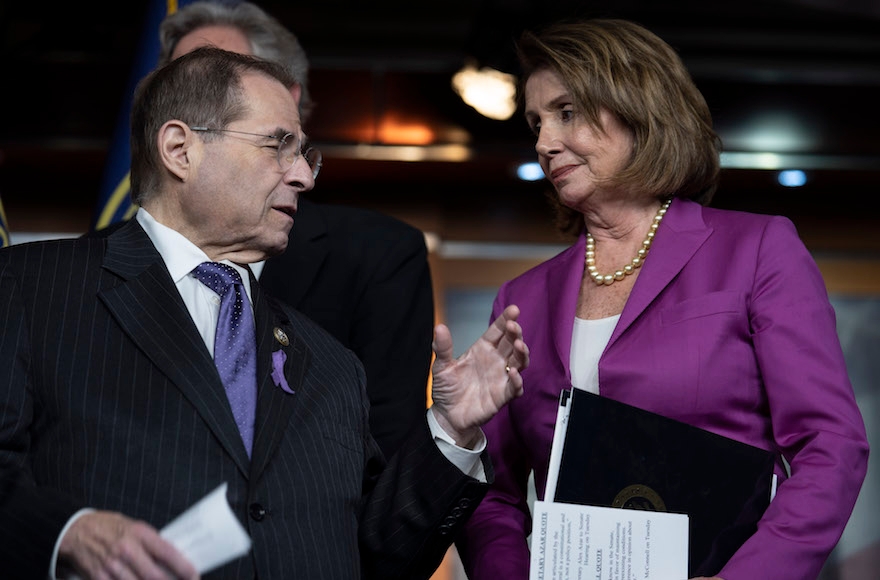 Jerry Nadler, left, with Nancy Pelosi at a news conference held by House Democrats in the U.S. Capitol, June 13, 2018. Under Democratic control of the House, Nadler is in line to lead the body's judiciary committee. (Toya Sarno Jordan/Getty Images)
Advertisement

WASHINGTON (JTA) — The first-glance Jewish takeaway the day after the congressional midterms is that the number of Jewish lawmakers appears to have increased — in the U.S. House of Representatives to 28 from 23, and to eight in the Senate from seven.

But dig a little deeper and there’s more to it than a busier than usual Hanukkah party at the Library of Congress: Jews figured disproportionately in Democratic upsets. Jewish candidates also figured noticeably in the broader trends among Democrats: an increase in women and in former national security officials.

The centrist and right-wing pro-Israel communities could breathe a sigh of relief — for now. Two candidates in close races targeted by conventional pro-Israel money for being soft on or critical of Israel went down to defeat, and a stalwart who seem threatened survived.

However, those who would challenge orthodoxies on support for Israel also have reason for hope. Candidates endorsed by J Street, the Jewish group that has made a two-state outcome its central plank and supports U.S. pressure on Israel to bring it about, did well. Further to the left, there are four new members of the House who have either been harshly critical of Israel or would challenge pro-Israel stalwarts on legislation.

White supremacists fell by the wayside, with a notable exception, but the numbers who voted for them could be a cause for concern.

The big news is that Democrats took back the House after eight years, with 27 pickups and counting — projections say the number could reach 35.

What’s astonishing is how many of the upsets — as many as seven — are by Jewish candidates.

Andy Levin will preserve Michigan’s 9th District for Democrats: He succeeds his father, Sandy Levin, one of three Jewish House members who is retiring.

What brought these candidates to the table? A variety of factors, although health care featured prominently in many of their “why I’m running” bios, including Slotkin, Schrier and Rose. Phillips, Wild, and Rosen emphasized education, and Levin was focused on the environment. Levin and Schrier during their campaigns also said they were motivated by their concerns about bias — including anti-Jewish bias. The Jewish candidates all emphasized gun control.

Democratic congressional recruiters sought candidates with national security backgrounds, and three of the Jewish winners on Tuesday came from the security community: Luria is a former Navy commander, Rose is a former Army officer and Slotkin was employed by the CIA.

The women will rise

Democrats also actively recruited women, ascertaining that Trump’s past coarse comments on women, allegations of sexual assault and his policies that rolled back reproductive rights and protections for women who bring assault allegations would bring out women voters.

According to exit polls, there were results: Women broke 59 percent to 40 percent for Democrats. Of the new class of Jewish Democrats in the House, there likely will be 10 women among 28 members. Jacky Rosen joined Dianne Feinstein of California to bring to two the number of Jewish women Democrats (out of eight Jewish Democrats) in the Senate.

With a split decision, naturally, everyone — including Trump — declared victory, and within the pro-Israel community it was no different.

But the sides each had genuine reasons to take heart.

A pro-Israel official told JTA that the mainstream community was especially happy that Sen. Robert Menendez, D-N.J., perhaps AIPAC’s best friend among Senate Democrats, pushed back against a surprisingly strong challenge and was re-elected. They were also pleased that Leslie Cockburn, a Democrat who co-wrote a book in 1991 that was sharply critical of the U.S.-Israel alliance, lost her race in central Virginia.

“Virtually all of the victors in this year’s election have issued position papers and statements reflecting their strong commitment to strengthening the U.S-Israel relationship,” AIPAC said in a statement. “Support for the U.S.-Israel relationship on Capitol Hill is strong, and we are committed to continuing to work on a bipartisan basis with the 116th Congress to further galvanize support for the alliance.”

J Street also had reason to celebrate: Of the 163 candidates it endorsed, 122 won. The group still claims support from more than half of the Democratic Party’s House and Senate caucuses. The group exulted in a poll it published that found that 84 percent of Jewish respondents saw no contradiction between being “pro-Israel” and criticizing the Israeli government’s policies — a finding that comports with other recent polling.

“This whole line of attack from the right on candidates on Israel issues isn’t going to work on Jewish voters,” he said.

The Republican Jewish Coalition scored wins in races where it invested heavily, including in the North Dakota Senate race, where incumbent Democrat Heidi Heitkamp lost. The RJC ran ads scoring Heitkamp for backing the 2015 Iran deal.

It also ran ads in Pennsylvania’s 1st District, where Scott Wallace, who led a charity that once funded anti-Israel groups, lost, and in Cockburn’s district. RJC deployed grassroots campaigns in Florida, where Republican Ron DeSantis won the governorship and Republican Rick Scott had a slight lead in his bid to oust incumbent Democratic Sen. Bill Nelson.

“We sent a message about the RJC holding Democrats to account on issues of concern about Israel,” Executive Director Matt Brooks told JTA.

Jewish Voice for Peace, meantime, celebrated the victory of Rashida Tlaib, a Palestinian American elected to Congress in Michigan. Tlaib has called for cutting funds to Israel and rejects Israel’s status as a Jewish state.

“It’s a new hopeful day in Congress!” said the group, which embraces Jewish non- and anti-Zionists.

The good news? Anti-Semitic and racist outliers who managed to seize Republican nominations, often to be repudiated by the GOP establishment, lost. The bad news? Lots of people voted for them.

Seth Grossman, a Jewish candidate in the southern part of New Jersey, lost national party support for peddling racist theories. He gave the Democrat in the 2nd District, Jeff Van Drew, a run for his money, eventually garnering 45 percent of the vote — 110,000 people.

In Iowa, Rep. Steve King, the incumbent Republican in the 4th District who has endorsed a white supremacist for Toronto mayor and who has said that whites have contributed more to civilization than “any other subgroup of people,” narrowly kept his seat. He was repudiated by the party establishment for his white supremacist ties.

Brooks likened King to past outliers in both parties who reveled in their isolation on the margins and had limited influence.

“He marginalized himself,” Brooks said. “It’s been made clear by the party leadership they don’t support him and his outrageous views.”