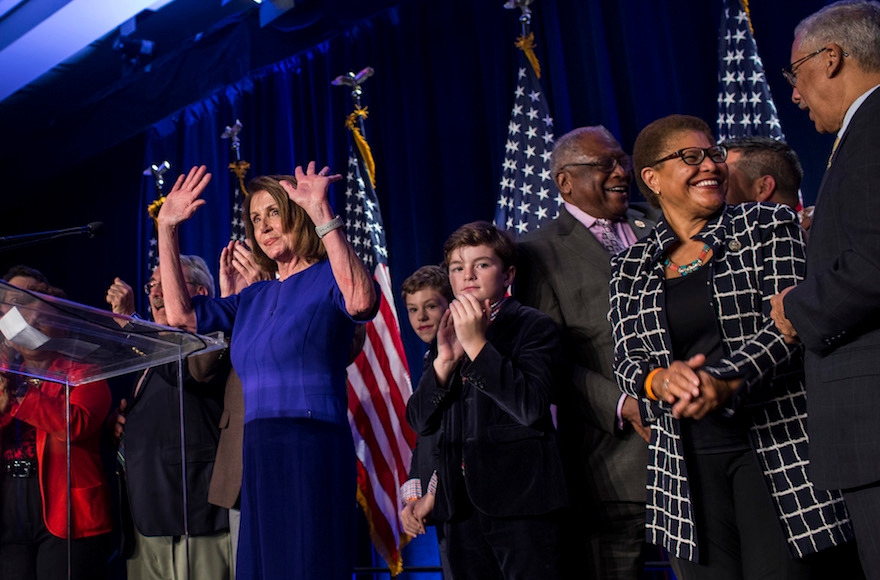 Nancy Pelosi, joined by House Democrats, delivered remarks during a DCCC election watch party at the Hyatt Regency in Washington, D.C., Nov. 6, 2018. She is poised to become Speaker of the House once again. (Zach Gibson/Getty Images)
Advertisement

(JTA) — The Republican Jewish Coalition praised the Republicans for expanding their majority in the Senate, while the Jewish Democratic Council of America congratulated their party on regaining control of the House of Representatives.

The RJC’s executive director, Matt Brooks, regarded the Republican victories in Tuesday’s midterm elections as a sign of “the strong approval of the American people for the Republican policies that have substantially improved our economy, our national security, and our standing abroad.”

While Democratic control of the House will pump the brakes on President Donald Trump’s agenda and shift the terrain in Washington, Republicans were relieved that a so-called “blue wave” of Democratic victories appeared to fall short, especially in at least three key Senate races — Indiana, North Dakota and Texas.

“Historically, the party holding the White House loses seats in Congress during the midterm election,” Brooks said. “This year, Republicans did well in a tough environment and increased their share in the Senate. And while we lost seats in the House, it should be noted that Democrats gained far fewer seats in the House this year compared to Republicans in recent history. Republicans gained 63 House seats in the 2010 midterms during President Obama’s first term and 52 in the 1994 midterms during President Clinton’s first term.”

Halie Soifer, the JDCA’s executive director, said the Election Day results sent a message to the White House and the GOP.

“The 2018 midterm elections were a clear referendum on President Trump, and a rejection of his hateful policies and rhetoric,” she said in a statement. “Jewish voters overwhelmingly and decisively rejected Republicans because they have enabled an agenda that is a betrayal of Jewish and American values.”

Both interest groups boasted of their activities in the 2018 campaign. Brooks noted the RJC’s support for three candidates: Brian Fitzpatrick, who won his House race against Scott Wallace in Pennsylvania’s District 1; Denver Riggleman, who won a close race over Leslie Cockburn in Virginia’s 5th; and Kevin Cramer, who unseated Heidi Heitkamp in North Dakota’s Senate race.

The RJC said it spent $2 million in the three races.

The JDCA said it endorsed 58 candidates and “invested more than six figures” in the midterm elections.