How we got new House Rep. Ayanna Pressley wrong on Israel 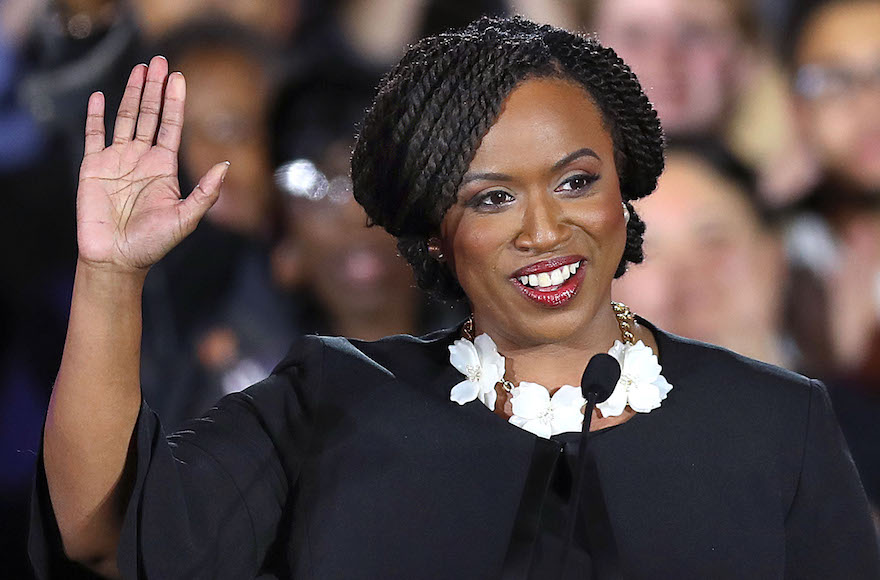 WASHINGTON (JTA) — Ayanna Pressley is the first black woman that Massachusetts elected to the U.S. House of Representatives.

In the media coverage of this wild and woolly election, her bio gets her lumped in with other women of color, all Democrats, who made history this cycle: Rashida Tlaib of Michigan and Ilhan Omar of Minnesota, the first Muslim women elected to Congress, and the now ubiquitous Alexandria Ocasio-Cortez of New York, at 29 the youngest woman elected to Congress. (Here are instances in the Daily News, NBC and Vox.)

It’s a natural trend that these women share the same outlooks. It’s also an unfortunate one because it can lead to a lazy assumption that “first” makes them “same.”

The assumption led Politico to run a story in August headlined “Why Ayanna Pressley is not Alexandria Ocasio-Cortez.” (Pressley is older, 44, and also more ensconced in the establishment.)

It’s an assumption that JTA indulged with a story I wrote on Election Day that lumped Pressley with the others as a harsh critic of Israel.

In fact, Pressley’s views on Israel differ little from the long-serving Democrat she unseated in the primary, Michael Capuano. That’s of a piece with her broader campaign strategy — she noted that on policy, she differed little with Capuano, a progressive, and instead argued that she was better positioned to lead progressives. The local media pointed out the lack of differences between the two.

The Boston Jewish community has a longstanding and friendly relationship with Pressley, a city councilor, said Jeremy Burton, the executive director of the Jewish Community Relations Council of Greater Boston.

“The Jewish community in Boston has enjoyed a warm and productive relationship with congresswoman-elect Pressley during her nine years holding a Boston citywide elected position,” Burton said in an email.

“During that time and during this year’s campaign, Pressley has sought out the input and perspectives of our leaders and organizations on a range of issues, including the US-Israel partnership,” he said.

Capuano’s Israel record never got much notice because it was unremarkable. He is typical of dozens of others endorsed by J Street, the liberal Jewish Middle East policy group: He backs a two-state outcome, as Pressley does in her Israel statement. He opposes the Boycott, Divestment and Sanctions movement targeting Israel, as Pressley does — but also opposes an anti-BDS law on First Amendment grounds, as Pressley does.

“We were pleased, though hardly surprised, to see during the campaign that Pressley specifically posted policy positions opposing BDS and supporting peace-building toward achieving a two-state resolution for Israelis and Palestinians,” Burton said.

On her website, Pressley says “I steadfastly support a two-state solution that will safeguard Israel’s future as a Jewish and Democratic state, and establish a sovereign and independent Palestinian. … We must avoid efforts to unilaterally blame and deny legitimacy to either side, and should instead work towards building a just solution that recognizes the trauma suffered by both populations.”

By contrast Tlaib, a Palestinian-American, favors a one-state solution to the Israeli-Palestinian conflict; Ocasio-Cortez called Israel’s clashes with protesters in Gaza a “massacre”; and Ilhan once tweeted that Israel had “hypnotized the world” to ignore its “evil doings.” None was endorsed by J Street — the lobby withdrew its endorsement of Tlaib after she declared she favored a one-state outcome.

Pressley does reportedly back a bill that centrist pro-Israel groups, including the Boston JCRC, don’t love: It would prohibit U.S. money to be used by Israel for the “military detention, interrogation, or ill-treatment of Palestinian children.” But that measure also has the backing of 29 progressives in the House and is not extraordinary.