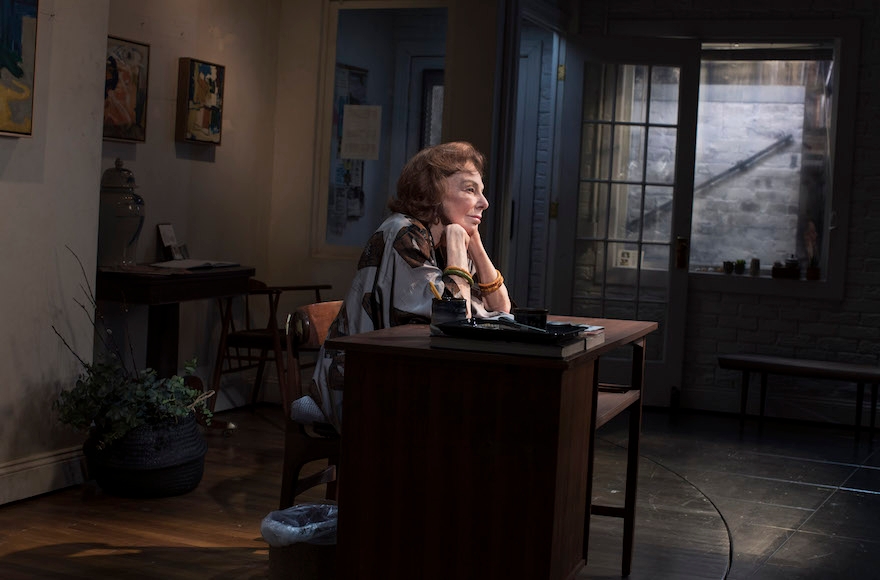 Elaine May stars in Kenneth Lonergan's "The Waverly Gallery," her first Broadway appearance in over 50 years. (Brigitte Lacombe)
Advertisement

(JTA) — On the phone last week, just before the revival of his play “The Waverly Gallery” opened on Broadway, Kenneth Lonergan sounded harried. There had been some set malfunctions earlier in the week, just as critics were getting ready to start their reviews. He acknowledged the play is hard to take — as much for him as for the viewer.

“‘Cathartic’ seems to imply that writing it made me feel better,” Lonergan said. “It didn’t.”

Perhaps the critics’ takes could lift his spirits.

“The Waverly Gallery,” which runs through Jan. 27 at the John Golden Theatre, has been quickly and widely hailed as a triumph. Elaine May, who stars as aging Jewish family matriarch Gladys Green, has made many headlines, for good reason — her tear-jerking performance, her first on a Broadway stage in over 50 years, could earn her a Tony Award.

Lonergan, 56, is best known for his 2016 film “Manchester by the Sea,” a slow-burning drama that earned him an Academy Award for best original screenplay and a nomination for best director. But he had a long and successful career both in film and on the stage well before that. He has been involved in everything from sensitive indie films (he wrote and directed “You Can Count on Me,” which earned an Oscar nomination for best screenplay) to period pieces (he co-wrote Martin Scorsese’s “Gangs of New York”) to comedies (he co-wrote “Analyze This,” which starred Robert De Niro and Billy Crystal). 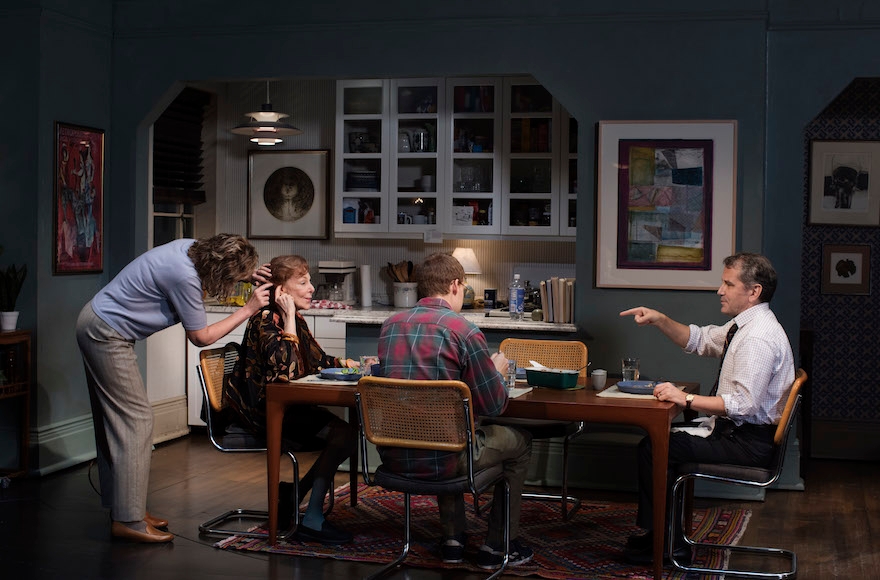 A scene from “The Waverly Gallery” shows, from left, Joan Allen, Elaine May, Lucas Hedges and David Cromer. (Brigitte Lacombe)

Despite his varied and acclaimed output, nothing can really prepare the viewer for the power of his latest Broadway production. It is in fact a revival of a 2000 play that was nominated for a Pulitzer Prize — but likely flew under the radar for many since it was off-Broadway.

In the play, Gladys lives alone in New York City’s Greenwich Village neighborhood, where she runs a small art gallery and is starting to show signs of Alzheimer’s disease. Her grandson, Daniel (played by Lucas Hedges, who broke out in “Manchester by the Sea”) lives next door, and Daniel’s mother and stepfather host her for a weekly dinner. As the Gladys they know slowly slips away, the Jewish family deals with a range of feelings, from frustration to compassion.

Most of the play is autobiographical, lending the story extra emotional punch. In real life, Lonergan is Daniel. Ellen Fine (Joan Allen) is in fact Kenneth’s mom and her husband, Howard (David Cromer), is Lonergan’s stepfather.

Lonergan, a Bronx native who was born to a Jewish mom and Irish dad, both physicians, had a “secular Jewish” upbringing. His parents divorced, and his mother remarried and moved to the Upper West Side.

“More religious people might call us ersatz Jews,” he said. “I was raised in an environment where most people I knew were Jewish. Some were bar mitzvahed, some were not. Some of my [step] siblings were bar mizvahed. I don’t think it’s unusual.” 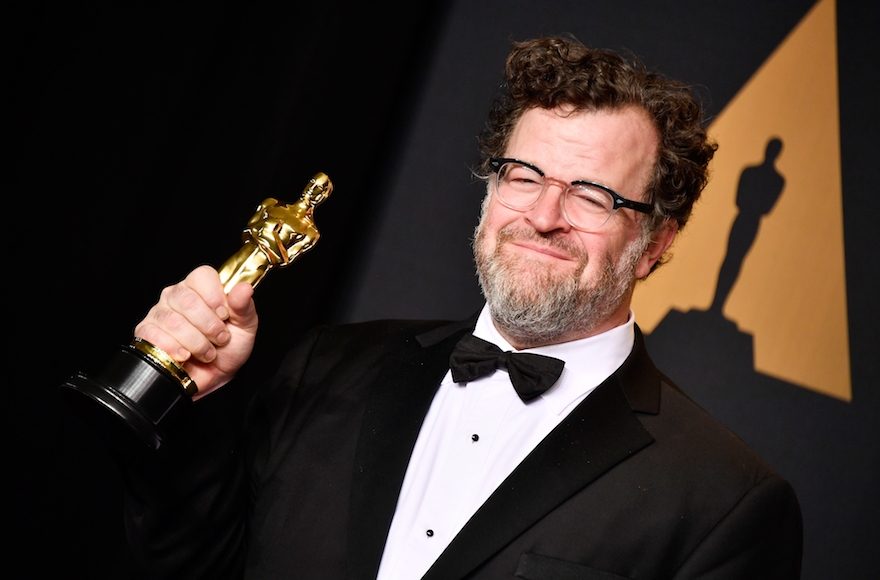 Kenneth Lonergan shows off his Oscar for best original screenplay for “Manchester by the Sea,” Feb. 26, 2017. (Frazer Harrison/Getty Images)

May, now 86, also is Jewish: She was born Elaine Berlin and performed with her father’s traveling Yiddish theater company as a child. She rose to fame in the late 1950s with her then-comedy partner, the late Mike Nichols — who was Jewish as well, and would go on to direct films such as “The Graduate” and “Who’s Afraid of Virginia Woolf?” May was last seen on the Broadway stage in 1961 as part of “An Evening with Mike Nichols and Elaine May.”

Lonergan was close to his grandmother, “pretty much as in the play,” he said, noting that they had dinner weekly and lived in the same building. That made the play difficult to write. During the writing process, his parents weren’t aware of what Lonergan was putting together.

“When I did show it, it was with some trepidation,” he said. “They said it was very difficult to go through it again, but they always came to the readings and saw it performed.”

After the gallery where his grandmother spent her days had to be closed — her condition deteriorated to the point where she could no longer be left alone — Lonergan’s mother and stepfather took her in instead of sending her to a facility. 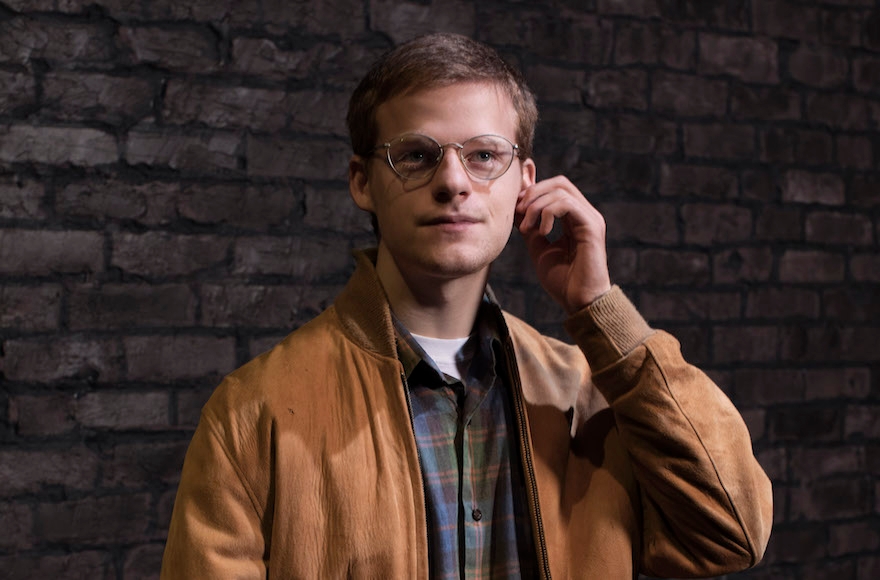 Lucas Hedges plays Daniel, a character based on Lonergan, in “The Waverly Gallery.” Hedges had starred in “Manchester by the Sea.” (Brigitte Lacombe)

If writing the play was hard, getting it produced in 2000 wasn’t, even though Lonergan had only one major previous play under his belt. “This Is Our Youth,” which starred a then-unknown Mark Ruffalo, was well received off-Broadway in 1996.

“I’d been around off-Broadway for a while, but once that play had done well, everyone wanted to produce what I did next,” Lonergan said.

Lonergan was mum on his future projects (there are many in the works), but the restaging of “Waverly” is clearly a very personal moment in the fast-paced career of one of Hollywood’s most sought-after writers.

“[My grandmother] was very important to me. I was watching her fall apart. I remember her [healthier] from when I was young,” he said. “I wrote it not long after she died. It was a tremendously painful experience for her and the rest of us as well. It wasn’t easy, but I thought it was something I needed to do.”