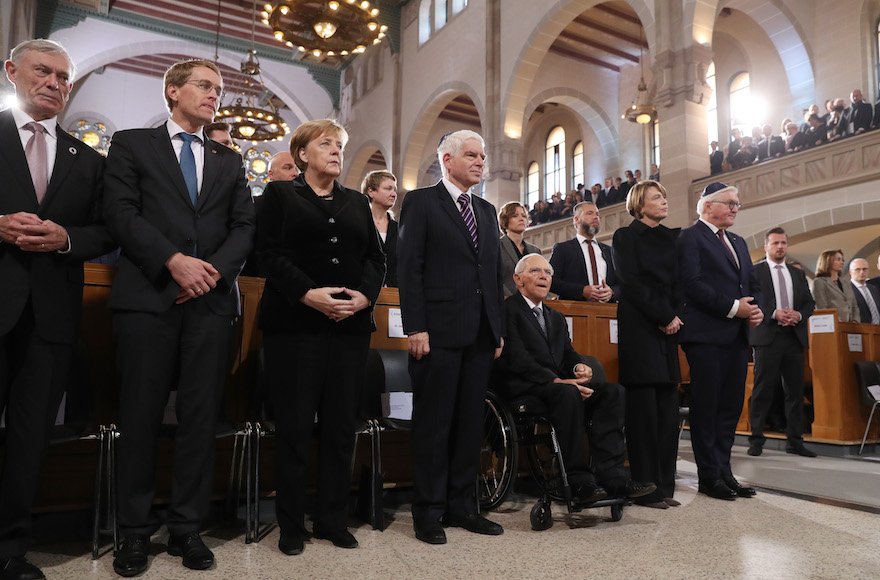 (JTA) — When the head of Germany’s main Jewish organization said only one Bundestag party was not invited to Friday’s commemoration of the Kristallnacht pogroms, few had any doubt: He meant the anti-immigrant Alternative for Germany, or AfD. And it was the only remark at the event that drew spontaneous applause.

Speaking at the soaring Rykestrasse Synagogue in Berlin, with German Chancellor Angela Merkel looking up at him from the front pew, Josef Schuster called on Germans to fight xenophobia, anti-Semitism and anti-Muslim sentiments, and in particular to oppose the unnamed “spiritual arsonists” who belittle the Holocaust and “mock its victims and survivors.”

At a ceremony broadcast live nationwide, Schuster called the recent demonstrations against hate in Germany “encouraging.” He cited hundreds of thousands of courageous people, dedicated to democracy, who “won’t let Germany just drift off to the right.”

Merkel, addressing the gathering of political and religious leaders and members of the Jewish community, said it was important to remember that the pogrom on Nov. 9-10, 1938, was “not an overnight phenomenon.”

“We can only draw the lessons for today if we can see this event as part of a process. We can see where it leads,” she said, “when criminal behavior is tolerated, even encouraged.”

While there were no eyewitnesses to the pogrom speaking at the event, their written words were read aloud from the bimah by actors.

Comparisons to today were not spared. Schuster noted that recent years have seen a rash of attacks on refugee housing, on the refugees themselves, on mosques as well as on synagogues and Jewish citizens, mostly perpetrated by neo-Nazis.

Schuster called the development “shameful for our country.”

In a rare move, the Central Council recently rallied other mainstream Jewish organizations in a statement of opposition to the AfD and to a new group calling itself Jews for the AfD. Though the party purports to address popular concerns about the integration of more than a million refugees and immigrants of Muslim background who have arrived in Germany since 2015, critics insist that the AfD’s ideological connections to neo-Nazi parties make it anathema not only to Jewish voters but to the German democracy as a whole.

The right-wing party had already received a slap this week when Berlin state legislator and AfD member Andreas Wild tried to join in the reading of names of murdered Jews at the central Holocaust memorial near the city’s Brandenburg Gate on Thursday. It was one of many events marking the 80th anniversary of the “Night of Broken Glass.”

Witnesses said Wild was blocked from climbing to the podium by Lea Rosh, an 82-year-old journalist and a non-Jewish activist who initiated the Holocaust memorial.

Michael Samuel Delberg, a member of the Berlin Jewish Community Council, told JTA that he heard Rosh tell Wild that “as long as your party calls this a ‘memorial to Germany’s shame,’ neither you nor anyone in your party will take part in the reading of names.”

Meanwhile, Austria marked the anniversary of the pogrom in ceremonies Friday at the parliament in Vienna. Chancellor Sebastian Kurz of the conservative Austrian People’s Party spoke in support of Israel and said it was important for Austria to grapple with its own role in persecuting its Jewish population under the Nazi regime.