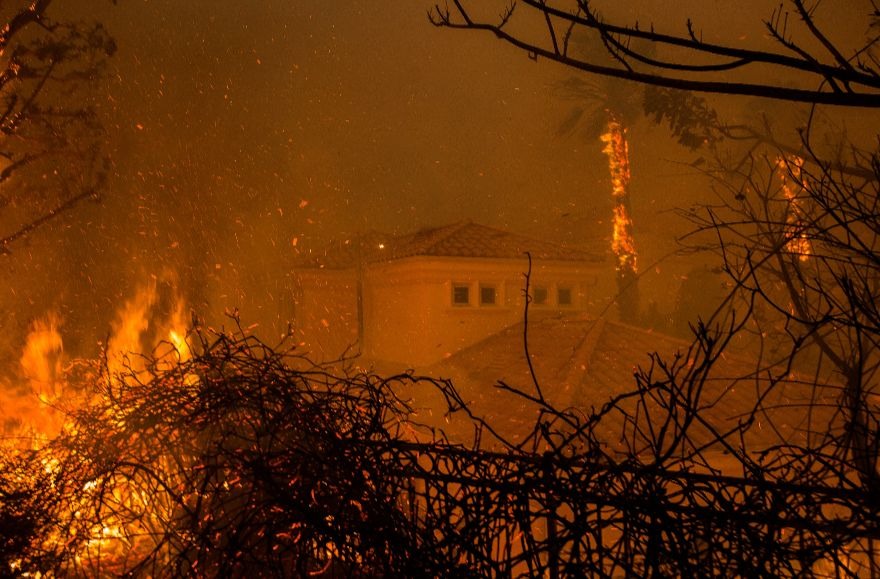 Flames surround a house in Malibu, California, on Nov. 9, 2018, part of the Woolsey fire that has led to the evacuation of about 75,000 homes in southern California. (David McNew/Getty Images)
Advertisement

(JTA) — The fires racing through Southern California have led to the evacuation of more than 260,000 people, burned over 83,000 acres and destroyed more than 170 homes, as well as damaged several Jewish institutions.

At the Ilan Ramon Day School in Agoura, fire destroyed the school’s computer lab, administration building and a bathroom.

“Our school, at its core, has never been about the physical space or the buildings in which the children learn. Our school is a sacred and special community,” the head of school, Yuri Hronsky, wrote Friday in a Facebook post. “Our school is about heart and soul, not about brick and mortar. I wish I had better news to share as we enter Shabbat this evening.”

The school launched a GoFundMe page on Friday titled “Help Rebuild Ilan Ramon Day School,” with a goal of $750,000.

The fire also reached the Shalom Institute, a camp and conference center located in the mountains of Malibu. In a message sent Saturday, institute leaders said in a letter that the fire had caused damage to the facility but it was not yet known how serious. The staff, animals and Torah scrolls located on the campus of the institute were safely evacuated on Friday, according to the message signed by Gil Breakman and Rabbi Bill Kaplan, the president and executive director, respectively, of the Shalom Institute, and Joel Charnick, director of Camp JCA Shalom.

“We know this news is upsetting to hear and we share your sadness,” the message said. “Camp is magical, but its magic transcends the buildings and structures. The magic comes from the loving community that we create when we are together. Though these losses may be painful, we know that the memories, friendships and joy that this place brings to so many lives on.”

Camp Hess Kramer, a camp owned by the Wilshire Boulevard Temple, said in a message to camp families that “at least some structures” at the camp were consumed by the fire. The camp’s Torah scrolls were evacuated ahead of the fire, and the camp is fully insured, according to the message.

“Our thoughts and prayers are with all the first responders working so hard to protect life and property and to those who are suffering. May we begin a new week with them and each other in our prayers,” read the message, posted on Facebook and signed by the synagogue and camp leadership.

The Reform Congregation Or Ami of Calabasas on Friday set up a “Kid Camp and Adult Hangout” at a nearby high school, which was scheduled to continue on Sunday.

“For anyone needing support, food, or simply a space to be,” the synagogue said on its website. “We will provide breakfast, snacks, and lunch. We also have games and activities for kids, as well as spaces for adults to gather and process. Teens: come be with your friends, or hang out with kids. There will be counselors available for support for anyone who wishes it.”

On Friday, the rabbi and president of Temple Adat Elohim, a Reform synagogue in Thousand Oaks, located in the same neighborhood as the Borderline Bar and Grill, the site of a deadly shooting on Wednesday night, managed to enter the synagogue on Friday and remove its four Torah scrolls as mandatory evacuations were underway.

Some 175 families who make up the congregation of the Malibu Jewish Center and Synagogue were evacuated from their homes, as was the synagogue. On Saturday, the synagogue posted on its Facebook page that the building remained unharmed.  The Torah scrolls had been removed a day earlier as a precaution to the Kehillat Israel synagogue in Pacific Palisades, which played host to a bar mitzvah that had been scheduled for the the Malibu Jewish Center. The family of the bar mitzvah invited the entire congregation to gather at the synagogue and celebrate with them.

In a message titled “We are here for you” posted Friday on the website of the Jewish Federation of Greater Los Angeles, federation CEO Jay Sanderson, wrote: “The past few weeks have tested our strength and resolve as a community and a nation.”

“I want to assure you that we are doing all we can to help our community as this natural disaster affects our Jewish institutions and homes,” he also wrote.

Mandatory evacuation orders were issued Friday for families and institutions in Calabasas, Malibu and Thousand Oaks.

Strong winds were forecast to pick up in the area on Sunday, which combined with little moisture in the air and extremely dry ground from months of drought could cause the fires to continue to spread, according to Accu-Weather.