More than 300 rockets from Gaza rain down on southern Israel, hitting a bus and homes 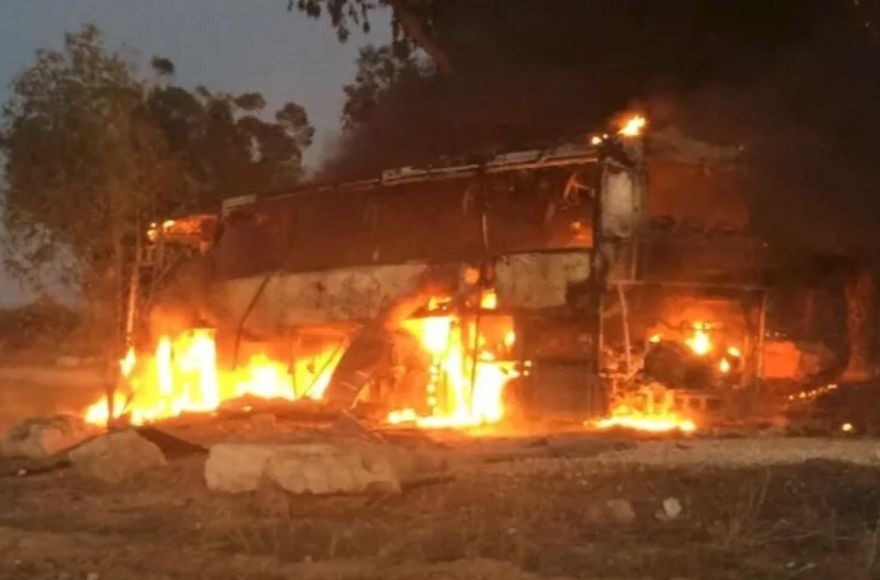 An Israeli bus traveling near the border with Gaza on fire after being hit with Palestinian mortar fire on Nov. 12, 2018. A 19-year-old Israeli man standing next to the bus was seriously injured in the attack. (IDF Spokesperson/Twitter)
Advertisement

JERUSALEM (JTA) — More than 300 rockets and mortars fired from Gaza rained down Monday evening on southern Israel, including one that hit a bus, seriously injuring a young man.

The Israel Defense Forces responded by launching attacks on Hamas sites in Gaza.

The man, 19, was on the bus when it was hit by what was identified as an anti-tank missile. Moments earlier the bus had been full of some 50 soldiers. He was evacuated to Beersheba’s Soroka Medical Center. He was later identified in reports as an Israeli soldier.

At least 29 Israelis have been were injured by shrapnel and flying glass, and dozens traumatized, the public broadcaster Kan reported.

Rockets directly hit a home in Netivot, and homes were hit in Sderot and Ashkelon, where the house caught fire. A gas leak in Sderot next to a corner supermarket was ignited by a rocket and firefighters were working to put out the fire. In addition, a gas depot in Sderot took a direct hit.  An apartment building in Ashkelon was hit by a rocket, injuring several people.

About 60 of the rockets fired from Gaza were intercepted by the Iron Dome missile defense system. Extra batteries had arrived in the area earlier in the day following clashes on the border after an Israeli army special forces operation was exposed on Sunday night.

The rockets set off Code Red sirens throughout southern Israeli communities, including for the first time in decades in Ein Gedi near the Dead Sea. The rockets began falling at 4:30 p.m., with more than 100 fired by 6.

The IDF called on residents of Gaza border communities to remain in place in their bomb shelters and safe rooms, and on the residents of the northern Negev, including Beersheba, to remain near their shelters.

Later Monday, the IDF said in a statement that it struck more than 20 Hamas and Palestinian Islamic Jihad targets in Gaza — hours later upping the number to more than 70 — using warplanes, combat helicopters and tanks. Targets included military compounds, observation posts and high-trajectory rocket launcher, according to the military. Later on Monday evening,  Israeli bombers destroyed the Hamas-affiliated Al Aqsa TV station, after firing warning missiles, to encourage the evacuation of the building.

Palestinian sources reported that three Palestinians, including two members of the Popular Front for the Liberation of Palestine and one from Islamic Jihad, were killed in the strikes. Israel and others consider both groups terrorist organizations.

The IDF warned Hamas, with its spokesman, Brig.-Gen. Ronen Manelis, saying in a tweet that the terrorist group will “feel the power of the IDF’s response in the coming hours.”

“The attempt to harm civilians is unacceptable,” he said, “and we will continue to respond with force.”

RAW FOOTAGE: The skies of southern Israel RIGHT NOW. Dozens of rockets are being fired from #Gaza at Israeli civilians. pic.twitter.com/Iu6QwzUo8l