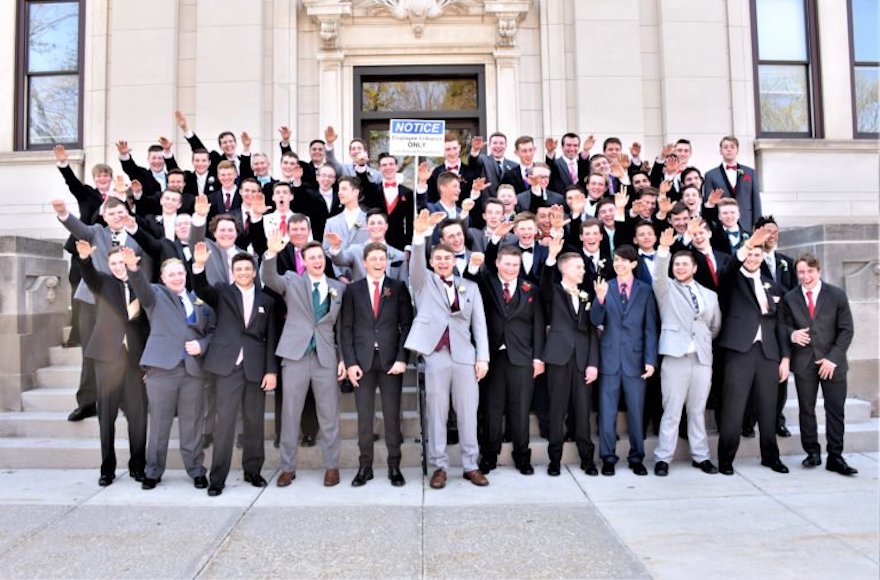 (JTA) — A Wisconsin high school is investigating a group photo of male students who are nearly all giving the “Heil Hitler” salute.

The photo was taken in the spring and involves about 50 students. The photo was posted originally in a private online album tagged #BarabooProud.

One student in the photo who is not making the salute told journalist Jules Suzdaltsev in a statement that the photo was taken at the teens’ junior prom.

I spoke with the only student who is visibly not comfortable with the “salute”, he provided this statement. pic.twitter.com/HbNBc8xLOK

The student, who identified himself as Jordan Blue, said he was uncomfortable with the photo but could not leave its frame since the photographer told the boys to make the salute and immediately snapped the shot.

“I knew what my morals were and it was not to salute something I firmly didn’t believe in,” he said in an account on Suzdaltsev’s Twitter account.

Jordan also said: “I attend BHS, these classmates have bullied me since entering middle school, I have struggled with it my entire life and nothing has changed.” He concluded: “I truly and firmly believe we need to make a change to this horrible act, it needs to stop. Bullying. Immaturity. and just taking things as a joke.”

The school, located in southern Wisconsin less than an hour from Madison, responded in a tweet from its official Twitter page.

“The photo of students posted to #BarabooProud is not reflective of the educational values and beliefs of the School District of Baraboo,” the tweet said. “We are investigating and will pursue any and all available and appropriate actions, including legal, to address.”

In a statement to parents, the Baraboo School District said the district is “a hate-free environment where all people, regardless of race, color, religion, creed, sex, sexual orientation, gender identity, national origin or ancestry are respected and celebrated.”

The Baraboo Police Department is assisting the school district in its investigation.

The official Auschwitz Memorial Twitter page tweeted a response to the photo.

“If @barabooSD wishes to know more about what can be the extreme result of normalization of hatred – and hatred is enrolled in this symbol – please see some online lessons dedicated to the history of Auschwitz,” it said.

The memorial attached a link to its e-learning page.

If @barabooSD wishes to know more about what can be the extreme result of normalization of hatred – and hatred is enrolled in this symbol – please see some online lessons dedicated to the history of Auschwitz: https://t.co/M1VC8b8Jlj