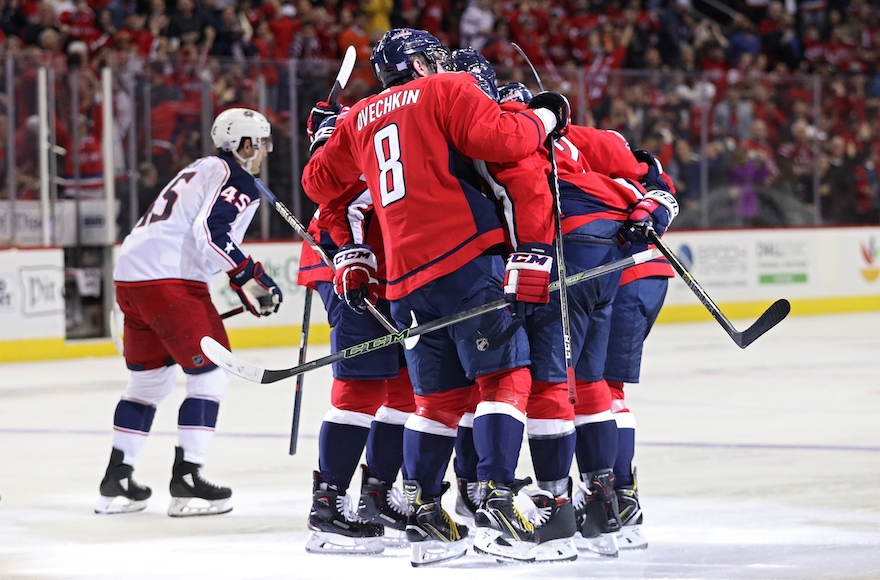 Members of the Washington Capitals celebrate after scoring a goal against the Columbus Blue Jackets at Capital One Arena in Washington, D.C., Nov. 9, 2018 in Washington, DC. (Patrick Smith/Getty Images)
Advertisement

(JTA) — A fan of the Washington Capitals ice hockey team donated his half of the team’s 50-50 raffle, or more than $19,000, to the Jewish Federation of Greater Pittsburgh for recovery efforts following the shooting at a local synagogue.

The team announced that the proceeds collected from the pre-game raffle, in which the winner splits the pot with a designated charity, would go to the Pittsburgh Jewish federation.

Fans purchased $38,570 worth of raffle numbers, the Washington Post reported.

The winner, a Capitals season ticket holder with his teenage son, waived the prize and donated it all to the federation.

“Look, I could never write that check by myself. But it was easy. It was simple. It was the right thing to do,” he told the Post.

He said he wanted to remain anonymous so as not to distract from the cause. He is not Jewish, according to the Post.

The raffle winner said that when his son heard what the cause was, he asked to add some of his own money. His son supported the decision to donate their half of the raffle money to the Pittsburgh Jewish federation.

“When the shooting happened, and you’ve got a teenage son who’s curious about what in the world is going on, it’s an opportunity to talk through things,” the raffle winner told the Post. “We talked a lot about hate and the fact that there’s no room for hate in the world. These people were shot simply because of where they worship and the fact that they might have been helping someone else. My family feels very strongly about this.”

Eleven people were killed in the Oct. 27 shooting. According to the federation, funds collected for its Our Victims of Terror fund “are earmarked for the psychological services, support for families, general services, reconstruction, additional security throughout the community, medical bills, as well as counseling and other services that may prove necessary for victims and first responders during their recovery.”