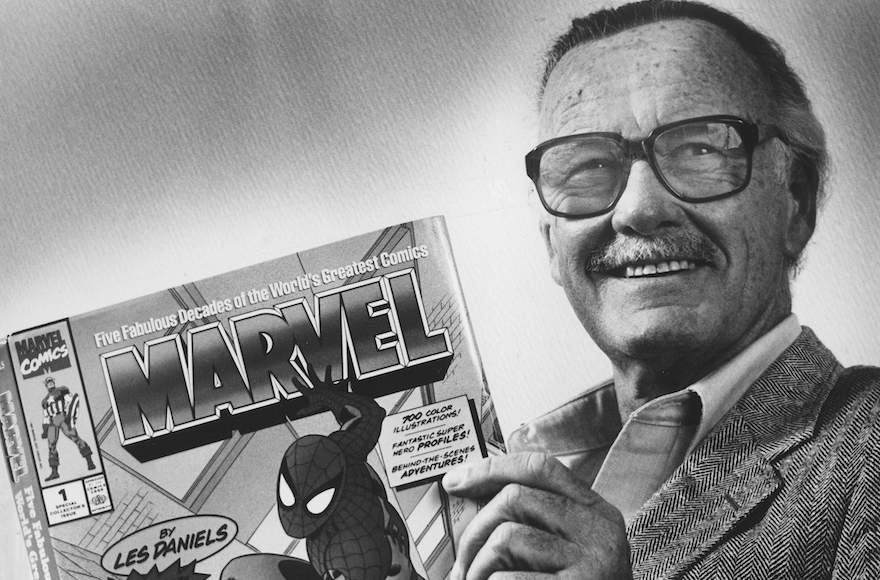 Stan Lee poses with a book of "Spider Man" comics in 1991. Along with Spider Man, Lee created characters such as Iron Man, Thor and The Incredible Hulk. (Gerald Martineau/The Washington Post via Getty Images)
Advertisement

(JTA) — When Stan Lee died on Nov. 12 at 95, he left behind a vast legacy. Between 1961 and 1969, his greatest sustained burst of creative activity, he co-created a vast array of iconic characters, including Spider-Man, the Fantastic Four, the X-Men, the Avengers, the Incredible Hulk, Thor, Iron Man, Black Panther, Daredevil, Nick Fury, Doctor Strange and Falcon.

Lee raised the bar for superhero storytelling. He created characters who had godlike powers, but who were painfully human nonetheless. They were relatable because of their flaws and foibles. They squabbled and gave in to petty jealousies, a rarity at the time. Lee’s skill at writing clever dialogue and witty one-liners ensured that his characters came off as charming and lovable, if also plagued by self-doubt. By setting many of his stories in New York City rather than a fictional venue like Metropolis, he kept his tall tales grounded in the real world. Or if not the real world, something very much like it.

But Lee did more than that. He also gave American comic books permission to be more Jewish.

One of Lee’s innovations as a comic book writer was his ability to imbue each of his characters with a well-defined, unique personality. Spider-Man, alias Peter Parker, was neurotic. A superhero nebbish was a novel idea back in 1962, when the character was first created. But this doesn’t make the character Jewish per se, and Jews don’t have a monopoly on neuroses.

However, Lee injected something very unique into the character’s DNA: Jewish humor. When Spider-Man fights his foes, he usually makes jokes and quips to cut the tension. In Amazing Spider-Man #40, published in 1966, the web-head is fighting the Green Goblin, and our hero climbs up on the ceiling. His nemesis yells, “The Goblin has ways of bringing you down!” Spidey replies, “But it’s so nice and cozy up here!”

Superheroes often quipped in the middle of action sequences in those days. But when most superheroes made jokes, the jokes were so … generic. On the other hand, consider Spider-Man’s line: “But it’s so nice and cozy up here!” It sounds like something a Borscht Belt comedian would say.

Did Lee purposefully intend to put Borscht Belt-style jokes in Spider-Man’s mouth? Not likely. However, there was an interesting thing happening to American comedy in the 1960s. Television shows like “The Ed Sullivan Show” and “The Tonight Show” would frequently book comedians who cut their teeth at the Catskills resorts, like Henny Youngman, Jackie Mason or Jack E. Leonard. All of America was being exposed to their distinct brand of Jewish humor. American humor was, in effect, becoming more Jewish.

And Stan Lee, born Stanley Martin Lieber, the son of Romanian Jewish immigrants, grew up in New York City in the 1920s and 1930s. He must have been familiar with Borscht Belt humor.

But why did he include those kinds of jokes in Spidey’s dialogue? Perhaps he couldn’t help it. Maybe it’s the sort of comedic voice he was most comfortable using. But there’s definitely a sense of Yiddishkeit that comes through in the webslinger’s one-liners. And since Lee stopped writing Spider-Man comics in 1972, no other Spidey writer has deviated from this template. These types of jokes have always been a popular part of the character’s repertoire. And no matter how dark a Spider-Man story is, Peter Parker never loses his sense of humor.

But Lee’s stories were more than just yarns about earnest (yet conflicted) do-gooders. Thanks to visionary artists like Jack Kirby and Steve Ditko, the 1960s Marvel titles were stunningly delineated dramas bursting with emotional angst and stuffed to the gills with pulse-pounding action sequences. But thanks to Lee, sometimes they also had a layer of sharp social commentary baked in.

Take for example the X-Men as initially created by Lee and Kirby in 1963. The titular supergroup was a band of mutants, people who were more than people, their bodies having evolved to contain a superhuman ability. One mutant boasted animal-like strength and agility. Another had sprouted wings and could fly. Their mutant powers were triggered during their teenage years, just as their readers’ bodies “mutated” during adolescence. The entire premise of the X-Men was an unsubtle metaphor for puberty.

However, in issue 14 of X-Men (published in 1965), Lee and Kirby discarded that rather obvious metaphor in favor of another, more socially relevant one — that of the mutant as a persecuted minority. In this story, titled “Among Us Stalk … The Sentinels,” an anthropologist named Bolivar Trask builds an army of giant killer robots programmed to detect and hunt down people with mutant DNA.

Toward the beginning of the story, the X-Men’s leader, Professor Charles Xavier, worriedly scans a newspaper article about Trask.

“So, it has finally begun,” he frowns. “The one thing I always feared – a witch hunt for mutants!”

The newspaper features an artist’s interpretation of a mutant in a chariot being ferried around by human slaves. The caption above the drawing reads, “Dr. Trask warns that the superior abilities and supernatural powers of the hidden mutants will enable them to enslave the human race, replacing our civilization with their own.”

By today’s standards, this dialogue is more than a bit cheesy. But for a comic book designed for children in the 1960s, this was heady stuff; a superhero tale designed to warn kids about the dangers of prejudice. In the story, mutants are clearly a substitute for any oppressed minority. Even the newspaper caption might sound eerily familiar with the line about mutants “replacing our civilization with their own.” It’s the sort of thing that bigots in 1963 would say about Jews, African-Americans or other minority groups. It’s exactly the thing white nationalists in Charlottesville, Virginia, said last year, when they marched while chanting “Jews will not replace us!”

X-Men #14 kicked off a three-part story arc with the “mutants as minority” allegory. With their intolerance for anyone different, Trask’s robots, dubbed the Sentinels, are clearly a metaphor for real-life hate groups such as the Ku Klux Klan or the SS death squads of Nazi Germany. By rerouting the trajectory of the X-Men series and making it about a group of persecuted outsiders, Lee and Kirby opened the door for other writers and artists down the road to make the X-Men a more diverse, inclusive superhero group.

And that’s exactly what happened. After floundering during the late 1960s, the X-Men title was rebooted in the mid-1970s under the stewardship of writers like Len Wein and Chris Claremont, who teamed with artists like Dave Cockrum. For the first time, people of color such as Storm (who hailed from Kenya) were a part of the group. So were Jewish characters, like Chicago teenager Kitty Pryde. The backstory of the X-Men’s archfoe Magneto was even tweaked, revealing that he was a Jewish Holocaust survivor.

Whereas Stan Lee’s X-Men was a Rod Serling-style allegory for anti-Semitism, the later incarnation of the group featured actual Jews as superheroes. This was unthinkable when Lee was the primary scripter on the title. In the 1960s, he did co-create a Jewish character: Izzy Cohen, one of Sgt. Nick Fury’s multicultural group of soldiers known as the Howling Commandos. But Cohen is a mere supporting character in someone else’s story. It would take another decade for Jewish characters to become more prominent in comics, and even then it would be under someone else’s direction. But it took Stan Lee to carve the path that his successors would follow.

(Author and public speaker Arie Kaplan interviewed Stan Lee for his award-winning nonfiction book “From Krakow to Krypton: Jews and Comic Books.” He has written scores of comic book stories and graphic novels featuring everyone from Superman to Speed Racer. Follow Kaplan on Twitter @ariekaplan)