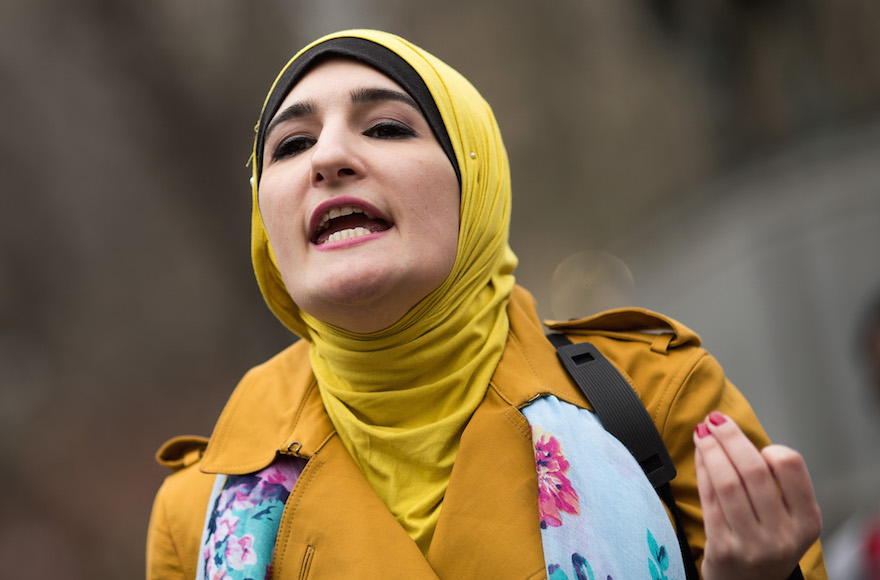 (JTA) — Women’s March leader Linda Sarsour appeared to criticize American Jewish liberals of putting their support for Israel ahead of their commitment to democracy.

Her comments, which some felt echoed charges that Jews have divided loyalties, appeared in a Facebook post calling for support for Rep.-elect Ilhan Omar, who said this week that she supports boycotting Israel.

Sarsour, a Palestinian-American activist for civil rights, wrote in the post Thursday that Omar, a Minnesota Democrat, is “being attacked for saying that she supports BDS (Boycott Divestment Sanctions) and the right for people to engage in constitutionally protected freedoms. This is not only coming from the right-wing but some folks who masquerade as progressives but always choose their allegiance to Israel over their commitment to democracy and free speech.”

Sarsour called for people to post messages of support to Omar on social media.

“You don’t have to support BDS and have every right not to but we cannot stand by idly while a brave Black Muslim American woman is targeted for saying she will uphold the constitution of the United States of America as a member of the US Congress,” she wrote.

In the comments section in response to the criticism, Sarsour singled out the Anti-Defamation League. In an online petition in support of Omar, Sarsour wrote that she was alarmed by “organizations like the ADL using their platforms to attack a trailblazing Black Muslim woman in order to undermine advocacy for Palestinian human rights.”

The ADL, along with many Jewish groups across the political spectrum, fiercely oppose the Boycott Israel movement, which they say unfairly singles out Israel for pariah status and has as its stated goal the dismantling of the Jewish state.

“Accusing Jews of dual loyalty is one of the oldest and most pernicious antisemitic tropes,” the AJC wrote. “No surprise to see it coming from @LSarsour. How long will progressive leaders continue to look the other way in the face of this hate?

Accusing Jews of dual loyalty is one of the oldest and most pernicious antisemitic tropes. No surprise to see it coming from @LSarsour. How long will progressive leaders continue to look the other way in the face of this hate? pic.twitter.com/cY6Mg7KhB4

On Wednesday, Ilhan’s campaign told the Muslim Girl website that she “believes in and supports the BDS movement.” It added that she “does, however, have reservations on the effectiveness of the movement in accomplishing a lasting solution.”

The statement appears to contradict her comments during a candidates’ forum at a Minneapolis-area synagogue in which Omar affirmed her support for Israel’s right to exist under a two-state solution. When asked if she supports BDS, she said that BDS “stops the dialogue” and is “counteractive” to achieving a two-state outcome.

Like many progressive Democrats, she opposes, on free speech grounds, laws that prohibit states from doing business with  companies that participate in campaigns to boycott Israel.

Omar’s tweets about Israel have earned her notoriety in the pro-Israel community. In 2012, she said that Israel had “hypnotized the world” to ignore its “evil doings.” Defending that tweet earlier this year, she said on the same platform that calling attention to the “Israeli apartheid regime” was not anti-Semitic.

Tlaib, a Palestinian-American elected from the Detroit area, also backs BDS and posted on Twitter in support of Omar.

“My parents were both born in Palestine (Falastine). My sity [sic] still lives there. So when my sister @IlhanMN is being attacked for supporting the #BDS movement (protected freedom of speech!) we can’t stay silent,” she wrote. “Nothing is more American than the fight for justice at home & abroad.”

My parents were both born in Palestine (Falastine). My sity still lives there. So when my sister @IlhanMN is being attacked for supporting the #BDS movement (protected freedom of speech!) we can't stay silent. Nothing is more American than the fight for justice at home & abroad. pic.twitter.com/rNhCQ77fLg