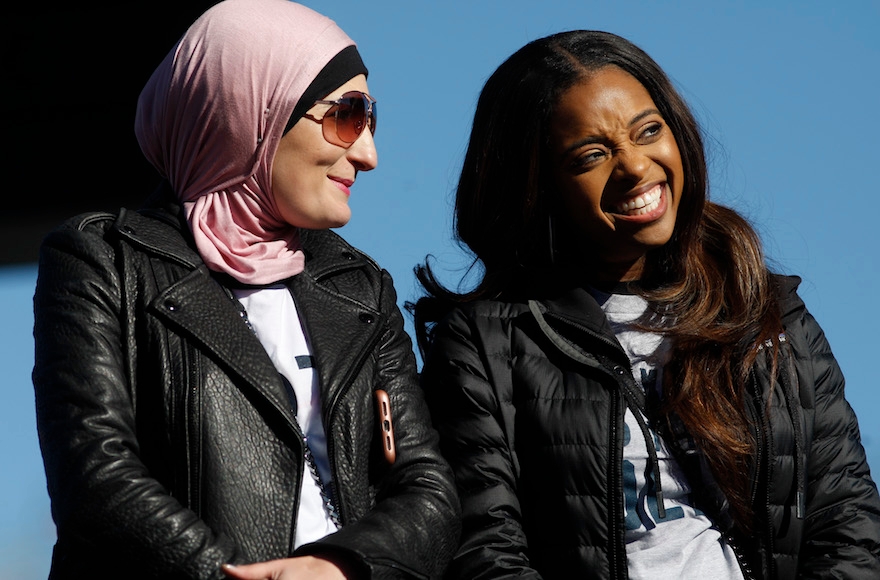 WASHINGTON, D.C. (JTA) — On the heels of actress and activist Alyssa Milano’s remarkable statement indicating that she plans to boycott the upcoming 2019 Women’s March because of its leaders’ persistent anti-Semitic behavior, there has been a backlash in our own Jewish feminist ranks. Jewish women are being urged not to abandon the national Women’s March, lest we empower white supremacists, who are more dangerous to Jews and to women, and are only too delighted to sow divisiveness among social justice activists. In effect, the argument goes, to raise a fuss about anti-Semitism among Women’s March leaders or other progressive activists is to be a tool of the far right.

It is condescending to presume that Jews who call out people like Linda Sarsour and Tamika Mallory are being manipulated and duped. We know anti-Semitism when we see it. In fact, Sarsour recently hit a new low by invoking on Twitter the pernicious “dual loyalty” canard that has been the basis of persecution of Jews for centuries by accusing progressive Jews of caring more about Israel than they do about preserving American values and ideals.

Like almost every other issue these days, the fight against anti-Semitism is becoming increasingly politicized, pitting right against left in a meaningless debate about the identity of the worst anti-Semites in our midst. But there is no “anti-Semitism Olympics,” where we crown David Duke and Richard Spencer’s team with the gold medal as the far more dangerous, authentic anti-Semites, while Louis Farrakhan and the Nation of Islam come in a distant second and have to settle for the silver. All anti-Semitism emanates from the same age-old tropes of the sinister, untrustworthy, greedy, repulsive Jew. Peddlers of this evil all need to be fought with the same conviction and vigor, regardless of where they are on the political spectrum and how their messages are packaged.

For decades, and for very ethical, laudable reasons, many Jewish activists have condemned Farrakhan while taking care to keep the lines of dialogue and communication open with his supporters. Efforts to share mutual narratives, collaborate on a huge range of public policy initiatives and nurture deep interfaith bonds have all strengthened connections between Jews and other minority groups in our local communities, and benefited society as a whole.

Yet despite all of these noble efforts, a gulf remains. Farrakhan and his loopy yet heinous conspiracy theories are becoming more normalized within some minority communities, and many progressive Jews have begun to feel unwelcome in the very movements that their forebears helped to create and grow.

With a nearly 60 percent increase in anti-Semitic incidents nationwide over the last two years even prior to the horror at the Tree of Life synagogue, American Jews no longer have the luxury of looking the other way or tolerating moral equivocation. At the interfaith solidarity service for the greater Washington, D.C., community following Pittsburgh, District of Columbia Mayor Muriel Bowser declared that America had failed its Jewish population that awful weekend.

“It is not the job of the Jewish community to solve anti-Semitism,” she said. Nor, I would add, are we obliged to passively enable anti-Semitism because of misplaced guilt or a sincere, values-driven desire to build bridges and heal our fractured world.

A palpable impatience and anger is beginning to grip many liberal Jewish women, especially since Pittsburgh. Many of the most loyal, passionate feminist soldiers in the Women’s March — having devoted significant time, energy and money to a movement in which they now feel disregarded and even perhaps unsafe — are simply walking away, at least for now.

The fight for the soul of the women’s movement cannot be waged “halfway,” nor can it be waged only by Jews. Alyssa Milano understood that, which is why she courageously refused to speak at the upcoming march unless these issues are thoroughly and honestly addressed.  The Women’s March does not have a monopoly on feminist activism. Just ask the many state and local Women’s March affiliates that have broken off from the national organization precisely because they find the current national leadership antithetical to the principles for which they stand. These are the women with whom we should be working in common cause, day in and day out.

To be sure, there are highly respected progressive Jewish organizations and individuals who for legitimate reasons will continue to work with the national Women’s March leadership, even as many of us choose not to associate with the movement at this moment. For those of us in the latter camp, the imperative is to take a firm, clear stand — and to support and encourage our true allies to join us in rejecting Mallory, Sarsour and their ilk.

In the end, can we ask of ourselves any less than Alyssa Milano, a non-Jew, demanded of herself? Hillel’s exhortation calls out to us at this challenging inflection point:

(Guila Franklin Siegel is the associate director of the Jewish Community Relations Council of Greater Washington.)