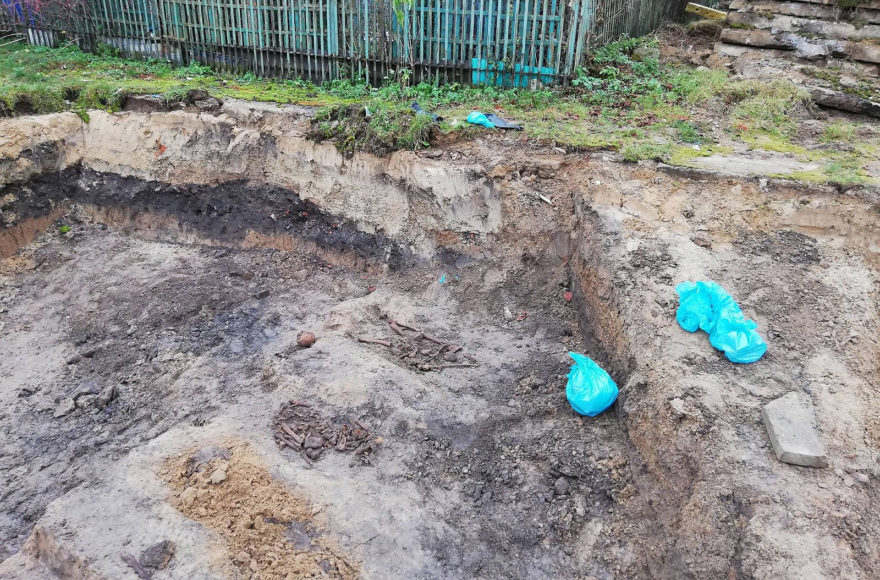 Bones lying in heaps at a construction site that began in 2018 outside the oldest Jewish cemetery of Wysokie Mazowieckie in Poland. (Courtesy of J-Nerations)
Advertisement

(JTA) — A Jewish burial ground in Poland was damaged and another had some headstones defaced with anti-Semitic symbols in separate incidents, according to a Polish activist group.

The damage occurred earlier this week at Wysokie Mazowieckie, a town located 70 miles northeast of Warsaw, the J-Nerations organization, which is involved in the preservation of Jewish burial sites in Poland, alleged in a statement Wednesday. But the municipality denied any damage to Jewish burial sites.

At least 10 skeletons “have been extracted without permit or permission for the enlargement of a local bus station,” the statement said.

The group’s founder, Meir Bulka, said that bulldozers remained working there even after the mayor promised to halt earthworks on the site, which dates back to the 18th century.

The construction site was supposed to border on the oldest Jewish burial site of Wysokie Mazowieckie but encroached on the graveyard’s territory, Bulka claimed. The graveyard does not have headstones, though fragments of them, including ones with Hebrew letters, are scattered across it. The city has a newer Jewish cemetery that does have headstones, Bulka said.

But Anna Niemyjska, who heads the town’s municipal property office,  denied that work was being carried out in the area.

“No construction works are carried out in this area,” she said in an email to JTA. Niemyjska also said that he municipality had commissioned archaeological works in which “graves were revealed, but as of today, we do not know exactly where the graves are.”

“After receiving information about the extent of burial places in the cemetery, it will be secured and commemorated with cooperation with the Jewish community” of Poland, she later said.

Bulka shared with JTA pictures that he said were taken this week at the construction site showing what appears to be human remains in heaps and inside blue garbage bags inside a freshly dug trench.

Last week, headstones were defaced with swastikas at the Jewish cemetery of Sochoczew, a town located 40 miles west of Warsaw, the World Jewish Restitution Organization said.

In addition to the Nazi symbols, “Death 2 Poland” and “ISIS will Rule” was written in red paint on headstones, referencing the radical Islamic State group, and a Jewish star was drawn hanging from a hangman’s post.

No suspects have been identified in the incident.

Gideon Taylor, chair of operations at WJRO, thanked local authorities for swiftly beginning to investigate what he called a “shameful act of hatred.”