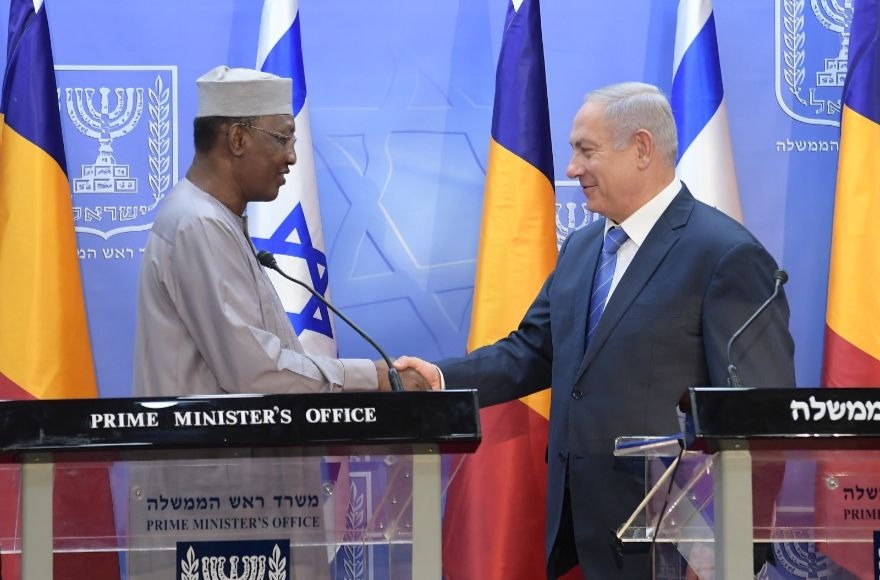 JERUSALEM (JTA) — The president of the African nation of Chad arrived in Israel on Sunday, marking the first time a president from the Muslim-majority country has made an official visit to the Jewish state.

President Idriss Deby said he is ready to restore ties between Chad and Israel, who severed diplomatic ties in 1972.

“The relations between our countries were cut in 1972 for specific historic reasons, but our special relations continued all the time,” Deby said. “The current visit to your beautiful country expresses our desire to take the relations that existed all the time and make them stronger.”

Netanyahu said during the statements by the two leaders to the media that Deby is “paving the way” for many other African nations to renew ties with Israel.

Deby added: “The resumption of diplomatic relations with your country, which I desire, does not make us ignore the Palestinian issue. My country is profoundly attached to the peace process and has shaped the Arab peace initiative, the Madrid principles and existing agreements.”

Netanyahu noted in his Cabinet statement that he met Deby on the sidelines of the ceremonies in Paris to mark the end of World War I and encouraged him to visit.

“This visit reflects the rising status of Israel among the nations … Every week we see the implementation of this concept, of cultivating economic-technological strength, alongside security-intelligence strength, to receive political-diplomatic strength. This is happening before our eyes, one might say, on a daily basis,” Netanyahu said. He asserted that “there will yet be other countries soon.”

Deby has served as president of Chad since 1990.

Meanwhile, the president of the Czech Republic, Milos Zeman, also arrived in Israel on Sunday evening for a three-day state visit.

Zeman is scheduled to open the “Czech House,” a cultural center, in Jerusalem during the visit, and it is said to be the first step toward establishing an embassy in Jerusalem, according to reports. The Czech House will contain government institutions including the foreign ministry’s Czech Center, the trade agency CzechTrade and tourism agency CzechTourism.

Czech Prime Minister Andrej Babis is against a move, and the Czech Foreign Ministry has not confirmed plans for an eventual embassy in Jerusalem.

Zeman is scheduled to lay a wreath at the Mount Herzl military cemetery, to visit Yad Vashem and to give a speech in the Knesset on Monday afternoon.