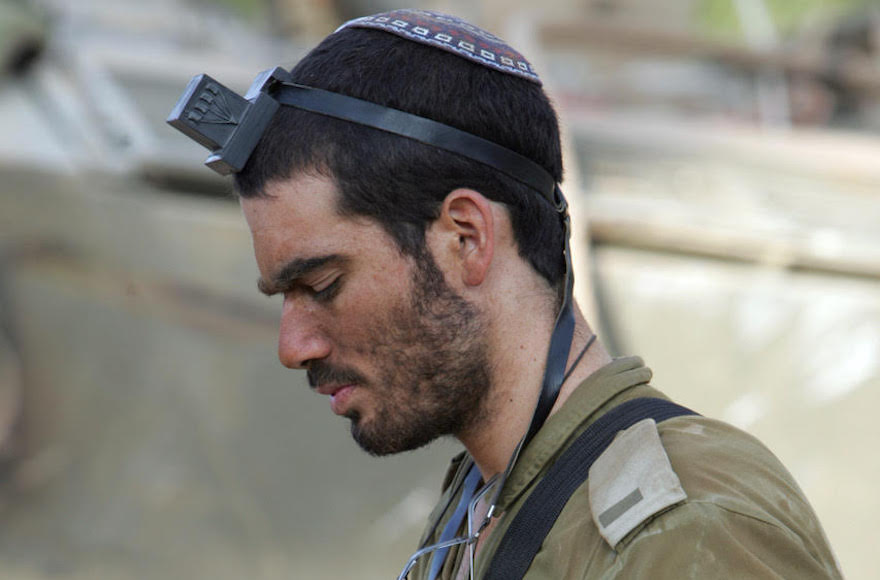 Asael Lubotzky attributes his recovery from a devastating injury suffered in the 2006 Lebanon War to his deep faith in God. (Courtesy of Lubotzky)
Advertisement

JERUSALEM ­— When Asael Lubotzky led his soldiers into battle against Hezbollah 12 years ago during the Second Lebanon War, he knew he might be wounded or even killed.

What the infantry platoon commander never could have imagined was that a crippling injury would catapult him into becoming a best-selling author — and, eventually, a physician.

Despite suffering wounds in Lebanon that nearly cost him his life, Lubotzky is now one of Israel’s most promising young cancer researchers. His work focuses on epigenetics: designing new methods for early diagnosis and treatment of cancer based on blood tests.

“It was Aug. 9, 2006 — the 15th of Av,” recalled Lubotzky, 35, who still needs the aid of crutches to walk. “I was talking on the radio, trying to help my guys navigate. I opened the hatch and lifted my upper body out in order to see better. Just then, an anti-tank missile fired by Hezbollah hit my vehicle. If I had been sitting at that moment, I wouldn’t be here today.”

That miracle, which Lubotzky attributes to his deep faith in God (he had lain tefillin that morning, as he does every day), was the first of many that enabled him not only to avoid the amputation of his severed right leg, but later to marry, have four children and realize his post-traumatic dream of becoming a doctor.

Today Lubotzky is an M.D. completing his doctorate at Hebrew University, where he shares a lab with 10 other researchers.

After his injury, the Jerusalem-born Lubotzky, who grew up in the West Bank settlement of Efrat, decided he wanted to tell the dramatic story of his recovery in a book. What became his 190-page autobiography began as a story of the battle that nearly killed him.

“I started writing because of all those long days laying in the hospital trying to remember the events,” Lubotzky said. “Many of my fellow comrades came to visit me, and we spoke about combat. I began writing a technical diary, with dates and what we did. As time went on, I elaborated and wrote more about what I felt. Later on, I decided to write about the rehabilitation process.” 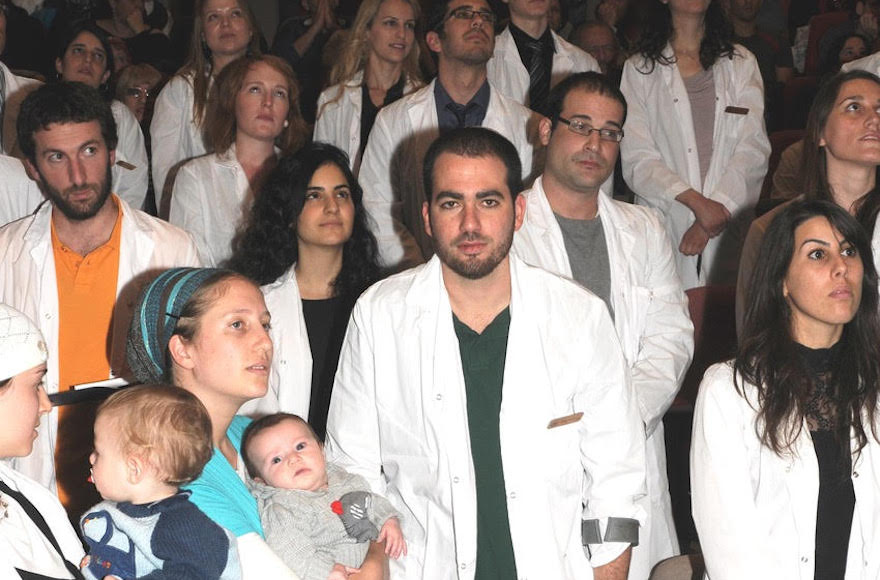 Asael Lubotzky was inspired to become a physician by the doctors who saved his severed leg. (Courtesy of Lubotzky)

In the 10 years since its publication, Lubotzky’s book, “From the Wilderness to Lebanon,” has sold nearly 20,000 copies in Hebrew and has been translated into English. His second book, “Not My Last Journey,” came out last year and documents the life of his grandfather, the partisan and Irgun officer Iser Lubotzky.

In another twist to his remarkable story, the mother of the doctor whom Lubotzky credits with saving his leg had been a nurse with a group of partisans in Europe fighting Nazis when she treated a man with a terrible leg wound – who turned out to be Lubotzky’s grandfather.

Inspired by the doctors who treated him during his recovery, Lubotzky soon turned his sights to medicine.

He eventually decided he wanted to focus on research, and recently joined the lab of Yuval Dor, a professor at Hebrew University’s Department of Developmental Biology and Cancer Research. He plans on finishing his residency next year in pediatrics at Jerusalem’s Shaare Zedek Medical Center, and to specialize in neurology and genetics.

In early July, the Israel Cancer Research Fund, which distributes some $4 million per year in grants for cancer research projects in Israel, awarded Lubotzky a two-year research grant worth $50,000.

Lubotzky’s research is focused on the links between DNA and cancer. When a cell dies, it often releases short DNA fragments into the blood known as circulating cell-free DNA, or cfDNA. Doctors have begun using liquid biopsies to sequence the cfDNA in the plasma and use the results as a diagnostic tool to detect such issues as fetal chromosomal aberrations, hidden tumors and graft rejection in solid organ transplants.

By looking for specific epigenetic marks carried by circulating cfDNA, scientists can make early diagnoses of various forms of cancer. For example, if a man has cancer, examining the circulating cell-free DNA along with the epigenetic marks in his blood may reveal and locate the primary tumor or metastatic tissue of origin.

“By sequencing those DNA fragments and epigenetic marks, we can infer the rate of cell death from various tissues,” Lubotzky said. “You can also perhaps track response to treatments from circulating cfDNA from tumors.” 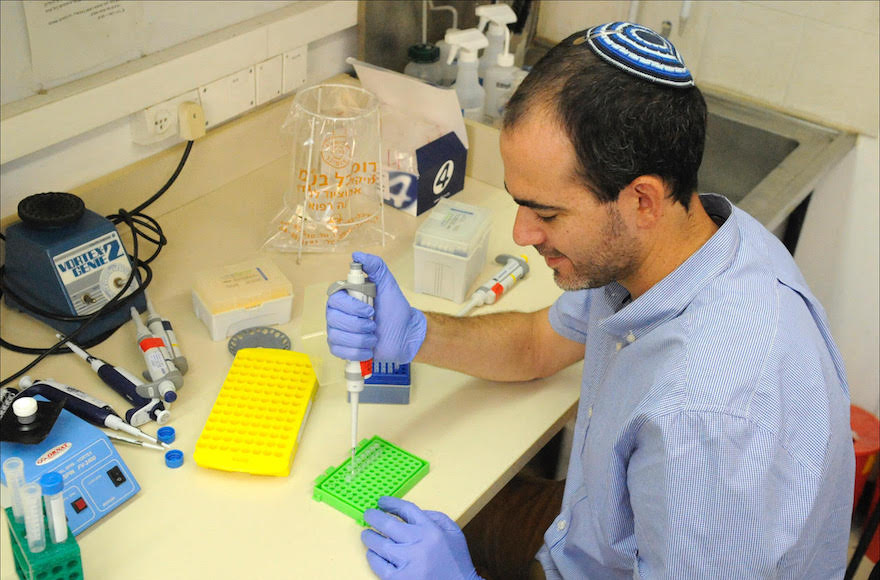 Asael Lubotzky is now one of Israel’s most promising young cancer researchers. His focus is epigenetics — designing new methods for early diagnosis and treatment of cancer based on blood tests. (Larry Luxner)

Nobody else in Israel is pursuing this line of research, according to Lubotzky, though a handful of labs in other countries are doing similar research.

“Here I have the combination of a very advanced molecular biology lab with clinical skills,” he said. “Though we work on very unique issues, we speak about the diseases of patients. We work on humans, not mice.”

Mark Israel, the national executive director of the Israel Cancer Research Fund, said his organization, which since its founding in 1975 has raised nearly $70 million for cancer research in Israel, finds Lubotzky’s work promising.

“ICRF Postdoctoral Fellowships empower young investigators who have a serious commitment to academic medicine to obtain research training in leading laboratories,” Israel said. “This coveted grant from ICRF recognizes Dr. Lubotzky’s demonstrated abilities to overcome great challenges and his potential to use those same skills to heal the world.”

While trying to help others, Lubotzky still contends with great physical pain stemming from his war injury. He underwent intense physical therapy in the early years after his injury, and today he’s careful to swim almost every morning – before heading off to morning prayer services.

“My body has to overcome lots of pressures that healthy people don’t have to overcome,” he said. “When I’m more active and do more sports and hold my kids in my arms, I think less about the pain. Yes, it’s something that’s going to be with me my entire life. But I’ve found ways to overcome it.”