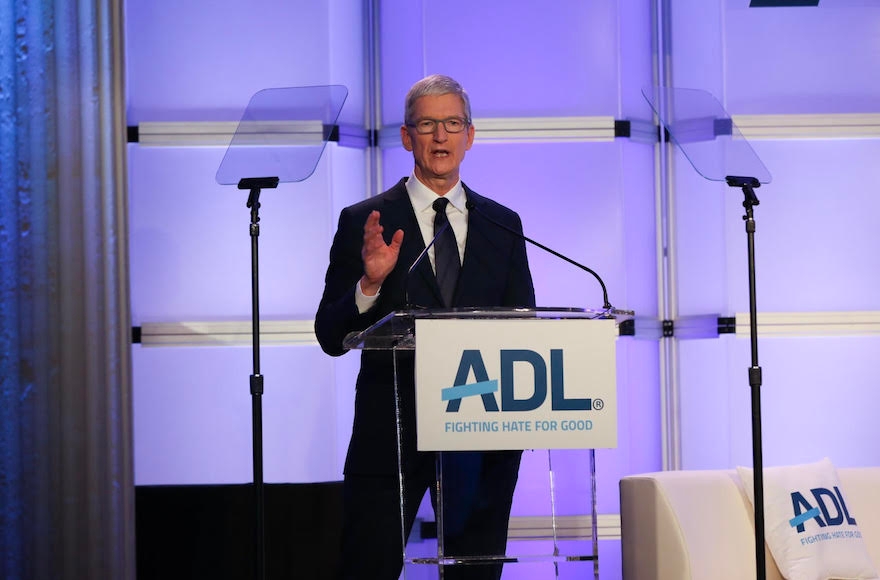 NEW YORK (JTA) — Apple CEO Tim Cook reiterated the company’s commitment to fighting hate and used a Hebrew phrase to do so.

Cook invoked a phrase from Leviticus 19:16 in its original language on Monday at the Anti-Defamation League’s Never Is Now summit on anti-Semitism and hate.

“‘Lo ta’amod al dam re’eikha.’ Do not be indifferent to the bloodshed of your fellow man,” Cook said after receiving the ADL’s Courage Against Hate Award.

Cook, who is not Jewish, said in his address that the biblical mandate moves Apple to speak out on behalf of the rights of targeted groups, including immigrants and the LGBTQ community.

“It moves us not to be bystanders as hate tries to make its headquarters in the digital world,” he said.

Cook has slammed President Donald Trump’s zero-tolerance immigration policies as “inhumane” and spoken publicly about being proud to be gay.

The Apple leader was speaking at the third annual Never Is Now summit, which addresses topics of anti-Semitism and hate in the world today. Some 1,300 people attended the one-day conference here, which featured presentations on anti-Semitism on campuses, immigration policies, diversity in the Jewish community and the forces driving modern anti-Semitism.

In a morning panel, historian Deborah Lipstadt was asked if Jewish women should attend the Women’s March — some of its leaders have been under fire for their associations with the anti-Semitic Nation of Islam leader Louis Farrakhan, or for failing to distance themselves from him despite his bigoted messages.

“No,” said Lipstadt, a professor of modern Jewish history and Holocaust studies at Emory University. Farrakhan, she said, has likened Jews to termites.

“And what does one do with termites?” she said. “Exterminate them. When you stand with someone who calls me a termite, I’m not marching with you.”

Cook referenced the shooting in Pittsburgh in October in which a gunman killed 11 worshippers at the Tree of Life synagogue.

“This year we’ve seen the stubborn and constant evils of anti-Semitism, violence and hate darken the streets of Pittsburgh and so many other places,” he said. “Yet at the same time we see more and more people opening their eyes and rising to their feet, and speaking out in defense of society where we are all bound together by the values we have in common.”

Cook cited policies of its online music store iTunes to not allow white supremacist-themed content or violent conspiracy theories as examples of its commitment to fighting hate.

“At Apple, we’re not afraid to say our values drive our curation decisions, and why should we be?” he asked.

Social media sites, including Twitter and Facebook, have come under fire for not doing enough to get rid of hateful content on their platforms. Cook in recent months has sought to distance Apple from the social media giants, saying Apple deals in hardware and does not depend on ad revenue from users.