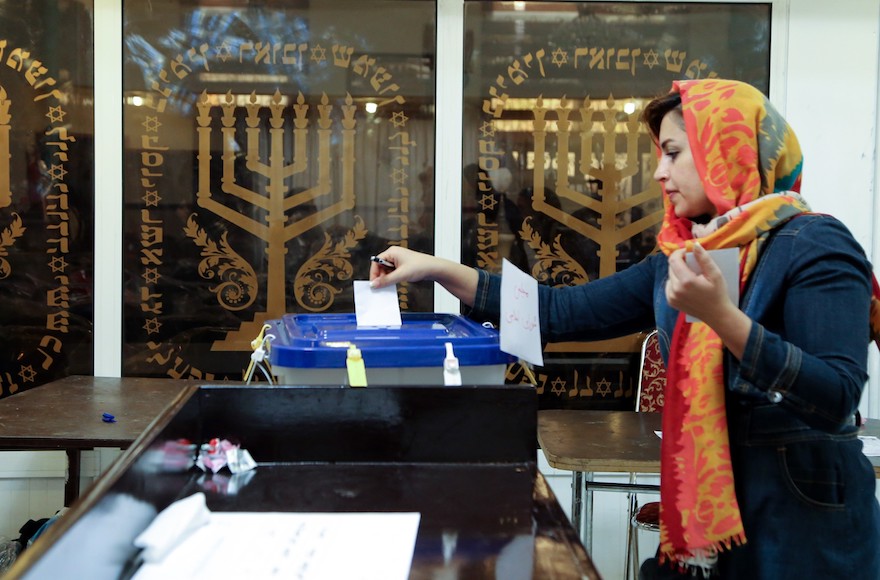 (JTA) — Several days after the Jewish Daily Forward published the first-ever report from the Islamic Republic of Iran by a reporter openly representing a Jewish, pro-Israel news outlet, the host of CNN’s foreign affairs show “GPS” posed a vexing question.

Citing the Forward’s surprisingly favorable account of the circumstances under which Iran’s Jews lived, Fareed Zakaria asked: “If the Tehran regime had genocidal inclinations toward Jews, surely they would have, in some way, taken it out on the Jews who live in Iran, and the fact that they don’t should cast some doubt on the idea that Iran has these kind of anti-Semitic and genocidal intentions.” Turning to the reporter who filed the story, Zakaria asked, “Do you buy that?”

As the journalist in question, I didn’t at the time. And with PBS pitching basically the same point in its Nov. 27 report on conditions for Iran’s Jews today, I don’t now, even though both my August 2015 report and the recent story by PBS accurately depict the small number of Jews who remain in Iran today as living pretty secure lives with religious freedom and economic viability.

The problem in both Zakaria’s question and the PBS report (and many similar reports) is the premise.

As “PBS News Hour” put it in its story’s very first paragraph: “The Trump administration and U.S. ally Israel often depict the Iranian government as composed of anti-Semitic radical Islamists bent on destroying Israel. But within Iran, many of the estimated 15,000 Jews say they’re safe and happy living in the Islamic Republic.”

Why the but? Both things are true. Many Jews in Iran are safe and happy — at least enough to prefer staying there rather than gamble by uprooting themselves for an uncertain future elsewhere. And Iran is a country whose most powerful forces — within a divided government — are radical Islamists who do seek to do what they can to ultimately liquidate Israel as a Jewish state, albeit not at the cost of their own country’s existence.

As both PBS and I myself reported, Tehran’s Jewish community today can boast 13 active synagogues, five Jewish private schools, several kosher restaurants and the capital’s oldest charity hospital, which was founded and is still run by Jews.

At the same time, Iran’s supreme leader has published a listicle titled “9 key questions about elimination of Israel,” which makes the primacy of armed force in that effort clear. The Iranian Revolutionary Guards’ elite Quds force has sought to use its position in Syria, where it has thousands of troops, to establish air bases potentially capable of serving as launch sites for attacks on Israel. Iran has funded a massive buildup by Hezbollah of missiles in Lebanon that are capable of reaching major cities throughout Israel. And despite its adherence to the 2015 nuclear deal it agreed to with the United States and other world powers — even with America’s withdrawal this year — Iran has continued to develop its ballistic missile capabilities to the point where its missiles are now capable of reaching anywhere in Israel.

To be clear, Iran has shown a limited appetite for actually launching any such attacks in the face of Israel’s massive deterrent power. But as I explained to Zakaria, the paradox remains: Iran accommodates some 9,000 Jews — according to the community itself — viewing them in a compartmentalized fashion as an age-old indigenous community totally separate from the malignant international forces of Zionism. The government may also see propaganda value in being able to point to the community’s continuing existence to international journalists. But Iran’s indulgence of its tiny Jewish minority doesn’t mean it wouldn’t wipe out Israel, the state of the Jews, if it could.

If someday an Iranian leadership less cautious than the present were to launch an actual full-blown attack on Israel with the assets it has in hand, the number of dead Israeli Jews could number in the tens of thousands, even hundreds of thousands. The assertion that it was an anti-Zionist attack rather than an anti-Semitic one, as demonstrated by the existence of a small community of Jews in Iran, wouldn’t make much difference to anyone.

This is a problem of seeing the forest for the trees. And it’s a problem that plagues the “News Hour” report in several respects.

The story refers vaguely and incompletely to the discrimination that Jews (and other non-Muslim minorities) live with in Iran, mentioning only that Jews are “still kept away from senior government and military positions.”

In fact, the discrimination goes considerably beyond this. Under Iran’s sharia law code, different penalties are laid out for Muslims and non-Muslims for a variety of violations, almost always disfavoring the non-Muslims. The government also insists that each of the Tehran Jewish community’s five schools must be run by a Muslim principal — a requirement that the head of the Jewish community bluntly, and courageously, condemned on the record as “insulting” in my 2015 interview with him. If a Jew murders a Muslim, the proscribed penalty is death. If a Muslim murders a Jew, the payment of blood money is an option.

To be sure Jews, along with Christians and Zoroastrians, are recognized as “people of the book” in the Islamic Republic, with a legitimate place as tolerated minorities in Muslim society. The physical security of Jews as a community in Iran is even buttressed by a religious fatwa forbidding harm to the community that was issued by the Islamic Republic’s founding leader, Grand Ayatollah Ruhollah Khomeini, soon after he took power. But taken in total, the legal and social discrimination under which Iran’s Jews (and Christians and Zoroastrians) live leave them as basically well protected second-class citizens.

For Jews, the impact of these conditions is reflected in a basic statistic found nowhere in the PBS report. Before the 1979 revolution, 80,000 to 100,000 Jews lived in Iran. Today, only 9,000 Jews live there, according to census figures, where Iranians are obliged to list their religion. Those numbers make a big statement about what most Iranian Jews think about living under the conditions “News Hour” describes more or less accurately, if incompletely.

Much of the emigration took place in the years immediately after the revolution, when the ability of Jews to make reasonable lives for themselves was far less clear. Just months after the installation of Khomeini’s first post-revolution government, Iran’s execution of one of the community’s major leaders and leading businessmen, Habib Elghanian, for “contacts with Israel and Zionism” shocked many Jews into flight. The charge was one that could be applied easily to many Iranian Jews. To this day Iranian Jews, many of whom have family in Israel, must be discreet about those ties. But today, the government often looks the other way when Iranian Jews quietly visit Israel via third countries.

According to Dr. Siamak Morsadegh, the director of Tehran’s Jewish hospital, as well as its elected representative in Iran’s parliament, those who have stayed are primarily members of the middle class — shop owners, small businessmen and professionals.

In PBS’s look at those who remain, one disservice of its story is the depiction of Iranian Jews as simply objects of their government’s policies. Given their circumstances, this in fact is one of the bravest Jewish communities in the world.

When Iran’s previous president, Mahmoud Ahmadinejad, repeatedly questioned the reality of the Holocaust, Jews and others around the world denounced him loudly — and so did Iranian Jewish leaders.

Maurice Motamed, who represented Iran’s Jewish community in parliament at the time, told a reporter for the Persian service of Radio Free Europe/Radio Liberty on the record, “Denial of such a great historical tragedy that is connected to the Jewish community can only be considered an insult to all the world’s Jewish communities.”

Haroun Yashayaei, then head of the Tehran Jewish community, wrote Ahmadinejad himself: “How is it possible,” he demanded, to ignore all the undeniable evidence existing for the killing and exile of the Jews in Europe during World War II?”

PBS notes one recent positive change — the decision by President Hassan Rouhani’s government to recognize Saturday, the Jewish Sabbath but a working day in Iran, as a holiday for Jews, allowing them to stay home from school and work without penalty. But it neglects to mention that the change didn’t drop from the sky. It was one for which the Jewish community fought and lobbied tirelessly for years.

Similarly, until a few years ago, the government discriminated between Muslims and non-Muslims in so-called “blood money” awards in civil suits involving the death of an individual due to negligence. Under the government’s interpretation of sharia, a Muslim’s life was literally worth more than a non-Muslim’s in cold, hard cash, just because he was Muslim.

As Motamed explained to me during my visit, Jewish leaders worked hard in coalition with other religious minorities to change this.

“We consulted a lot of ayatollahs and took testimony from high-ranking clerics to show there must be equality under sharia,” he explained. Eventually the government agreed.

While it may challenge sharia interpretation and application, one thing the community does not do is challenge the legitimacy of sharia itself.

Many years ago Hamid Sabi, a London-based Iranian Jewish attorney who remained deeply involved in Jewish affairs as a liaison with the government from the outside, told me, “We’re quiet not because we’re cowed by the regime, but because we think the survival of the community depends on finding resolutions, not confrontation.”

Recalling the way of Queen Esther and Mordechai, Sabi said, “We didn’t live 2,700 years in Iran by confronting the government each time we had a problem. Yet each time we managed to get around the king’s edict.”

Whether because of limited time or lack of insight, this aspect of autonomous Jewish agency in Iran is one more thing that “News Hour” missed. This is a pity because in many ways, it’s the most remarkable aspect of Jewish existence in Iran today of all.

(Larry Cohler-Esses was news editor and special projects editor at the Forward from 2008 to 2017.)

Larry Cohler-Esses
Larry Cohler-Esses was news editor and special projects editor at the Forward from 2008 to 2017.
The views and opinions expressed in this article are those of the author and do not necessarily reflect the views of JTA or its parent company, 70 Faces Media.