The heroes of the Hanukkah story have been called religious zealots. Should American Jews care? 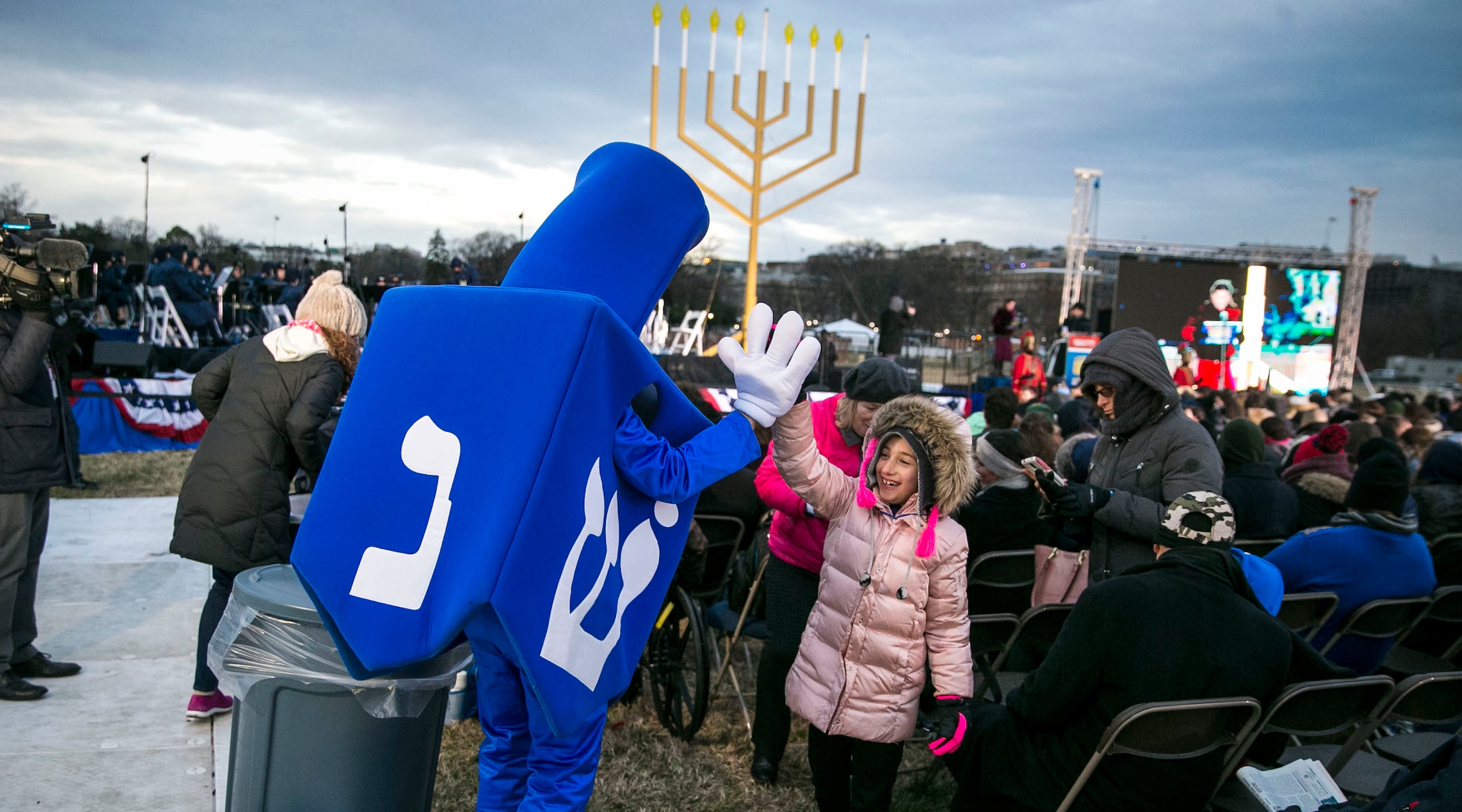 (JTA) — A band of religious zealots, in the face of imperialist forces that threaten their faith, band together and, battling enemies within and without, take control of their country. They establish a theocracy that quickly becomes corrupt.

This is the premise of the holiday currently being observed by American Jews, who tend to be liberal in their views.

Or is it? The dueling narratives of Hanukkah have been baked (or fried) into Jewish tradition for ages. Are Jews celebrating the military victory or the religious miracle of a small jug of oil that lasted eight days? Is the hero of the story Judah Maccabee, a general, or is it God? Is this a holiday celebrating Jewish power or divine providence?

The perennial tension between the Maccabees’ militarism and modern American Jewish dovishness arose again this week in a New York Times op-ed by novelist Michael David Lukas called “The Hypocrisy of Hanukkah.” Lukas laments that Hanukkah “commemorates an ancient battle against assimilation. And it’s the one holiday that most assimilated Jews celebrate.”

But that dichotomy, experts say, is false. The Maccabees weren’t exactly extremists. Their enemy was, indeed, causing real harm to Jews. The oil jug story appears to be a later innovation of the rabbis of the Talmud. And for a long time, American Jews were just fine with celebrating militarism.

“As a Jew this holiday is hard for me in terms of my kids asking about it because I have a hard time telling them what I actually know about it,” said Shayna Sheinfeld, a Jewish studies professor at the University of Kentucky who studies antiquity. “When we tell the story to our kids, we like to paint it as a stark contrast between black and white, but it was a lot more complicated than that.”

Some Jews have long been squeamish about the Maccabees, a band of religious Jewish guerrilla fighters in the second century BCE who ousted the Seleucid Empire from Ancient Judea. Maccabee skeptics point to the civil war they waged on Jews who had become Hellenized, as well as to the corruption of the Hasmoneans, the dynasty that ruled Judea after the Maccabee victory.

Tellingly, the Talmud includes substantial criticism of the Hasmoneans and does not credit the Maccabees for Hanukkah. Instead, compiled centuries after the events, it tells the legend of a small jug of pure oil that was only sufficient to light the menorah in the rededicated Holy Temple for one day, but lasted eight days.

“But the true miracle of Hanukkah was what came after those victories almost 2,200 years ago – the Jewish Temple was cleansed and consecrated, and the oil that was sufficient for only one day lasted for eight,” the statement read. 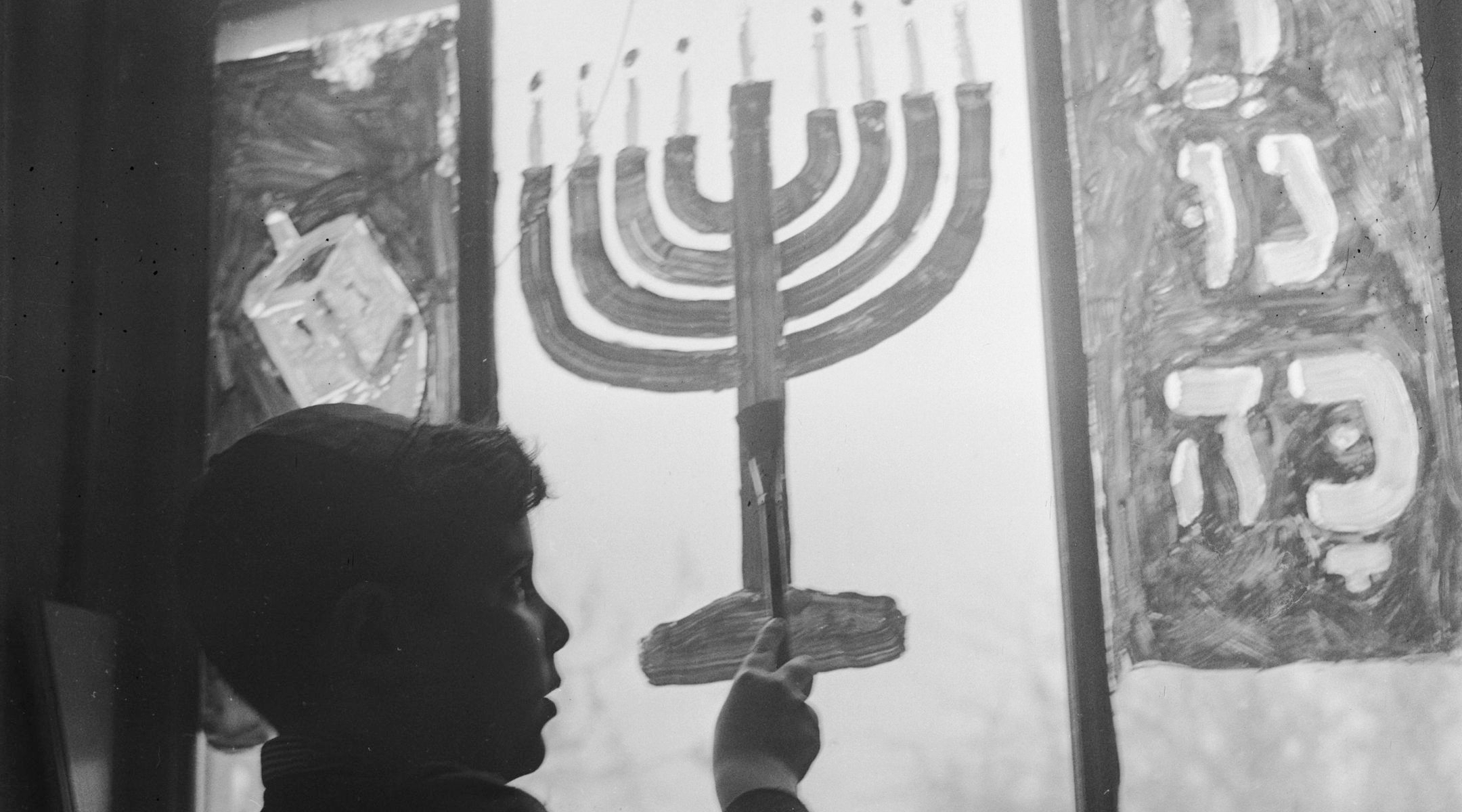 A boy decorates a window at the Hebrew Institute of Far Rockaway in New York to mark Hanukkah in 1950. (Al Barry/Three Lions/Getty Images)

But American Jewish discomfort with Jewish military triumph is a new phenomenon, says Dianne Ashton, author of “Hanukkah in America: A History.” In the 19th century, the era of the Civil War, the Indian Wars and other conflicts, militarism pervaded America. In the 20th century, Jews who fought in the world wars, mourned the Holocaust and celebrated the new State of Israel admired strong Jewish soldiers who could win on the battlefield.

“In the mid-19th century, militarism was a great value in America,” Ashton said. “In the 20th century, we had a couple of world wars, we had the Zionist movement, so militarism by Jews was seen as something that could be quite valuable.”

Seen even through 21st-century American Jewish eyes, the Maccabees weren’t unequivocally bad, says Rabbi Danya Ruttenberg, an author who tweeted a viral response to Lukas’ op-ed. While the Maccabees did oppose assimilated Jews, Ruttenberg says, the Seleucid persecution they were rebelling against indeed posed an existential threat to Jews. So, in other words, this wasn’t really “The Handmaid’s Tale.”

Sheinfeld adds that for their time, the Maccabees were not especially extremist. There were Hellenized Jews, but there were also those who were more religious and objected to what they saw as the Maccabees’ breaking religious laws to, say, fight on Shabbat.

“The oppression was real, the desecration of the Temple, the demand that we give up everything we hold holy was real,” Ruttenberg said. “The fact that people were murdered for circumcising their children was real. … We need to remember that the few can triumph over the many and that sometimes resistance to an imperial army is possible.”

Jews in Israel, which has a mandatory draft and where the military enjoys high levels of trust, have also historically identified with the Maccabees’ military victory. The state’s secular founders appreciated the holiday as a celebration of Jewish machismo as opposed to dependence on God.

“The Zionists were drawn to Hanukkah for many reasons, and one of those was a model of manliness because there weren’t many of those in Jewish history,” said Shayna Weiss, associate director of the Schusterman Center for Israel Studies at Brandeis University. “This idea of masculinity and fighting for yourself — they wanted to replace God’s power with their own power.”

Ruttenberg says the answer to those who are uncomfortable with the Maccabees is to focus on the nuances of the holiday. Yes, she says, the Maccabees did bad things. But seeing the holiday’s story as either all good or all bad, she says, fails to understand the complex and sometimes contradictory realities of history.

“I think our faith needs to grow up and our relationship to history needs to grow up,” she said. “In order to regard Hanukkah responsibly, we need to name all of the bad stuff and be super clear about the fact that this is not a child’s story.”