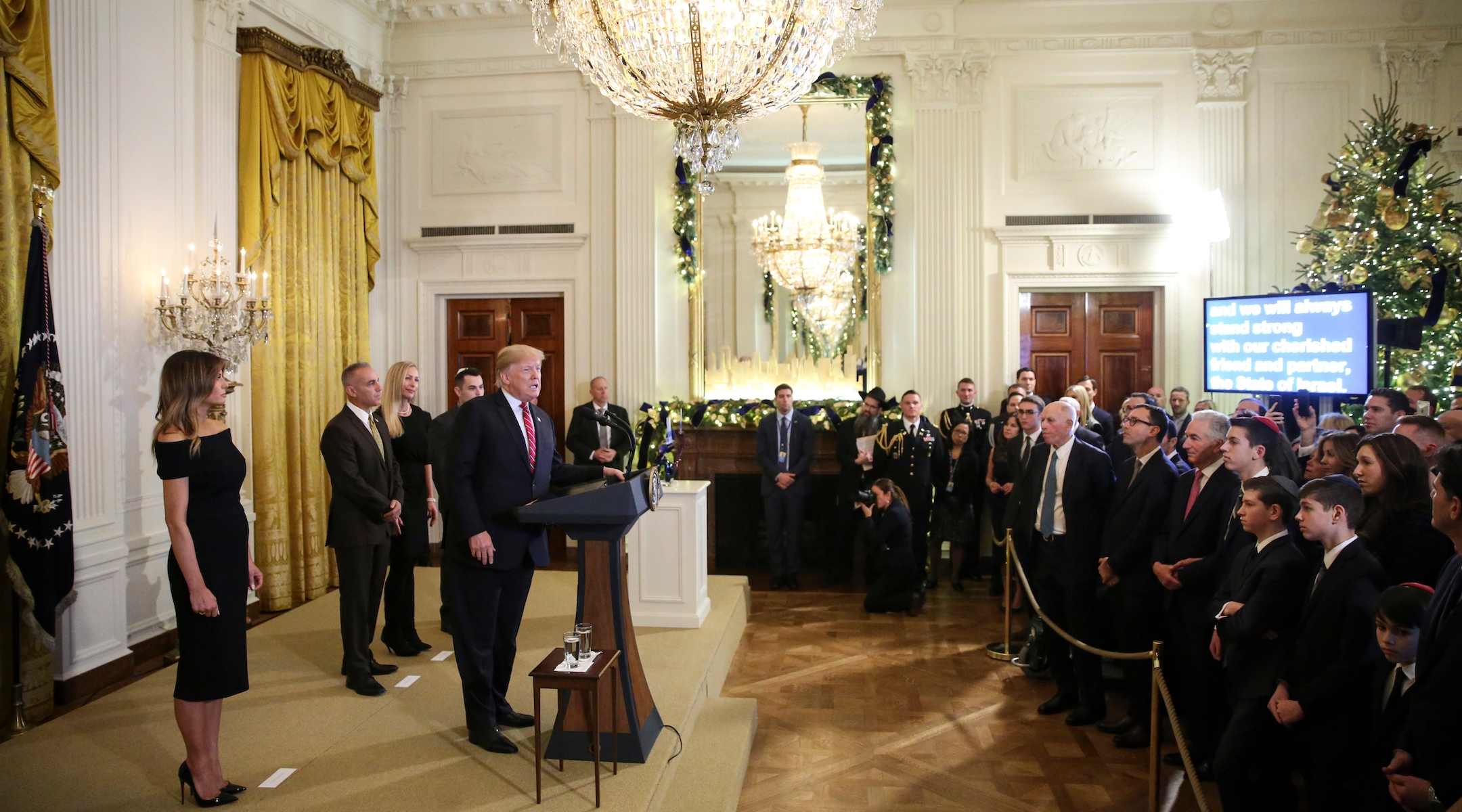 WASHINGTON (JTA) — President Donald Trump presents as an anti-Barack Obama, boasting about how much of his predecessor’s work, from the courts to immigration to medical care to the Iran deal, he has undone.

Trump, naturally, mentioned undoing the Iran deal at both of his Hanukkah parties on Thursday.

But in that “both” lies a concession that Trump likely will never cop to: He has taken up a tradition that Obama initiated, doubling the number of Hanukkah parties to two. (Last year, the White House hosted one Hanukkah party.)

His special guests at the first party were eight Holocaust survivors. The second featured the Pollack family, who lost a daughter, Meadow, in the mass shooting in Parkland, Florida, this year.

The mood was festive, according to those attending. Mentions of Trump’s pro-Israel moves were cheered and then, at the behest of one of the guests (not identified in pool reports) cheered harder.

From the pool report, filed by a Congressional Quarterly reporter: “POTUS applauded the Jewish people for building Israel into a ‘mighty and majestic nation.’ He then pledged his administration would always stand beside Israel. That, and what was perceived as tepid applause, led one of the gentlemen called onstage by Trump to shout from over his left shoulder, ‘Let’s hear it, everybody. Go! C’mon!’ as he encouraged them to cheer louder. The crowd obliged as POTUS smiled.”

Then: “As POTUS began speaking about recognizing Jerusalem as the capital, the same gentleman again urged the crowd to make more noise. Again, they obliged. POTUS thanked them. That’s when the ‘four more years!’ chant started. Someone in the crowd noted, once the math is completed from this date, it would be ‘six more years.’ Trump expressed his agreement with the 2 + 4 equation.”

Some folks in the room at the afternoon party were nonplussed when Trump introduced Vice President Mike Pence and his wife, Karen, as admirers of “your” country — that is, Israel.

That raised a few eyebrows in the room, a participant told JTA, and engendered commentary outside of it, where people wondered whether Trump understood that American Jews tend to love Israel, but are, well, American (or at least resent any insinuation, intended or not, that they put the former before the latter).

“Just a nice reminder that the line between antisemitism and philosemitism is so, so thin,” Shayna Weiss, the associate director of the Schusterman Center for Israel Studies at Brandeis University, said on Twitter.

The ace in Trump’s hand is his decision one year ago to move the U.S. Embassy to Jerusalem, which the hawkish pro-Israel crowd and the evangelical community loved and even pro-Israel centrists found hard to criticize. He often mentions it at campaign events, and of course, he mentioned it at the Hanukkah parties.

As he often does, the real estate mogul turned politician mangled the number, conflating the $400,000 it cost to move the embassy operation to an existing Jerusalem consulate building with the costs over time of renovating the building to meet U.S. Embassy specifications (an estimated $21 million), let alone the $1 billion it might cost to build an entirely new embassy — which might yet happen.

(The existing building was already “all Jerusalem stone,” which is a requirement of the Jerusalem municipality.)

Trump, in prepared remarks, noted the resiliency of the Jewish people, and how that is celebrated during Hanukkah week, and also spoke of the massacre in October at a Pittsburgh synagogue, when an anti-Semitic gunman killed 11 worshippers.

There also was a nod to post-election bipartisanship. Last year, the White House invited no congressional Democrats (although the overwhelming number of Jews in Congress are Democrats). This year they were invited, perhaps a nod to the Democratic victory in the U.S. House of Representatives. Turning up were Reps. Ted Deutch of Florida and Josh Gottheimer of New Jersey, as well as Jared Polis, the governor-elect of Colorado.

It was (as it ever is) a busy Hanukkah week in the nation’s capital. The Israeli Embassy hosted a Hanukkah party the same day (guests got a first-day issue of the Hanukkah stamp  that Israel and the U.S. are distributing at the same time). The congressional party took place at the Library of Congress, co-hosted in comity by Rep. Debbie Wasserman Schutz, D-Fla., and Lee Zeldin, R-N.Y. And the Republican Jewish Coalition had its bash at the Trump International Hotel.

Earlier in the week, the Austrian and Polish embassies hosted parties — the latter for the first time — and it was in conjunction with Israel’s embassy, a signal of warming ties between the countries. On Saturday, the Indian Embassy will host a party. The American Jewish Committee co-sponsored the Austrian and Indian events.

Shemtov organizes a slew of lightings around the capital, including one Monday night at the World Bank, and this coming Monday at the Pentagon.