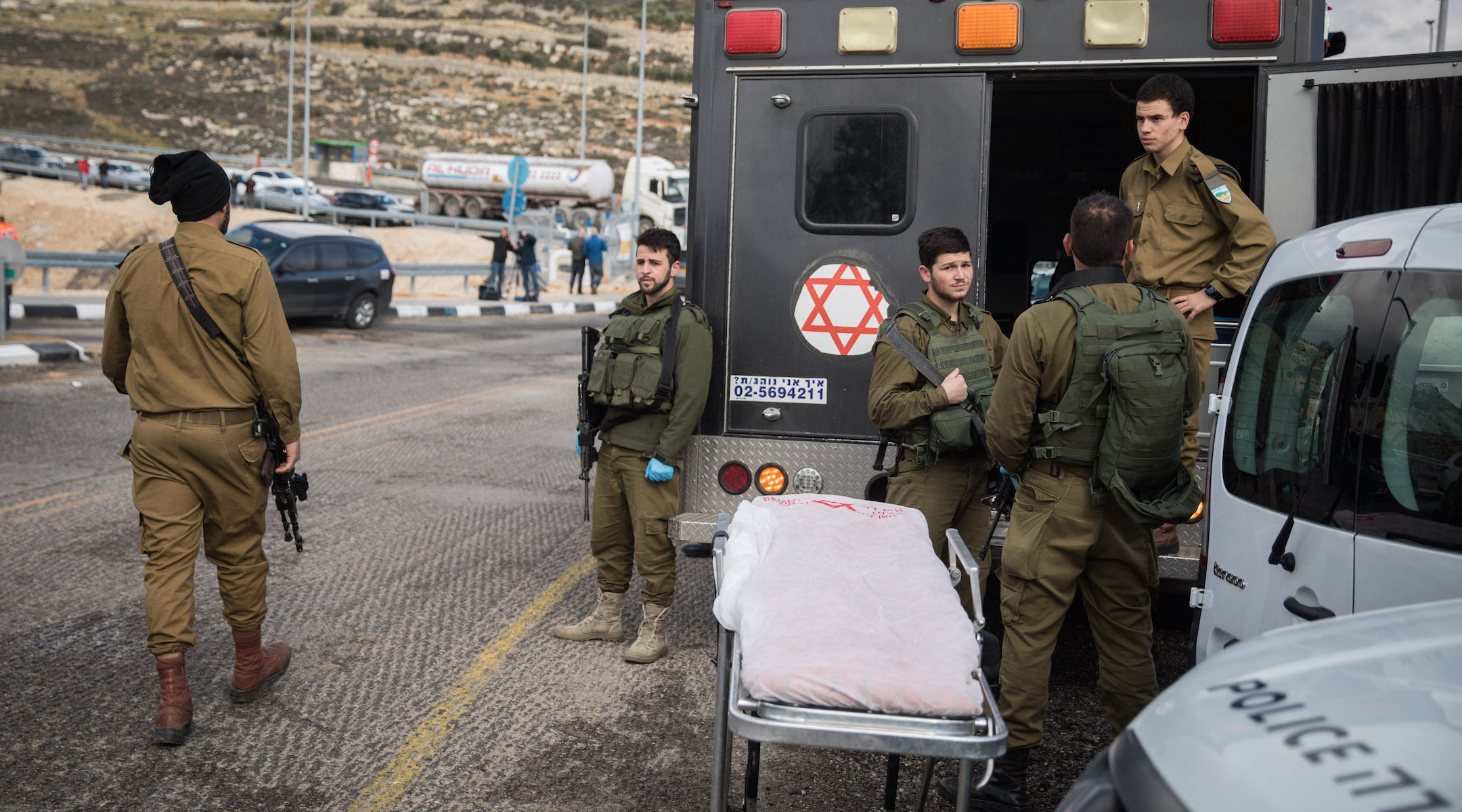 JERUSALEM (JTA) — Two Israeli soldiers were killed and two others seriously injured in a shooting attack near a bus stop in the West Bank.

The attack on Thursday morning occurred at a bus stop outside of the Givat Asaf settlement, about a mile down the same road from the settlement of Ofra. Ofra was the site of a shooting Sunday night that left seven people, including a pregnant woman whose prematurely delivered baby died on Wednesday, wounded.

It was the second attack against Israelis on Thursday. A third attack suspected to be a car ramming attack in the West Bank was later ruled to be an accident. The Palestinian driver in that incident was killed.

In Thursday’s West Bank attack a gunman stopped his car next to the bus stop, got out of the car and began shooting. He fled the scene on foot.

Four people, all in their 20s, were shot in the attack. The two dead were later identified as Staff Sgt. Yovel Mor Yosef, 20, and Sgt. Yosef Cohen, 19. According to the Times of Israel, Mor Yosef was from Ashkelon. Cohen was a resident of Beit Shemesh. Both were members of the Kfir Brigade’s Netzah Yehuda infantry battalion, a unit for religious soldiers. The soldiers reportedly were guarding the bus stop when the attack occurred.

One of the injured is a man in critical condition with a gunshot wound to his head; he also was identified as a soldier. The injured woman is a civilian.

“His condition is very serious. There is a threat to his life,” a Hadassah spokesperson told media about the injured soldier.

The attack came hours after Israeli troops shot a man in Ramallah suspected of involvement in Sunday’s attack near Ofra. The suspected attacker later died of his wounds.

Hamas praised Thursday’s deadly attack. “Hamas praises numerous resistance attacks as well as the citizens of the occupied West Bank and the revolutionary youth,” Hamas Spokesman Abdul Latif al-Qanou said in a statement, according to the Jerusalem Post. He said the attack “is in response to the crimes of the Zionist occupation in the occupied West Bank. Our members will stand against the occupation and will resist it – until it ends.”

The Fatah Party of Palestinian Authority President Mahmoud Abbas blamed the attack on Israel, referring to the deaths of three Palestinians alleged to have been involved in two separate West Bank attacks while being apprehended by Israeli soldiers.

“When the occupation army harms and destroys Palestinian land and Israeli soldiers execute three Palestinians in a kangaroo court, they have to understand that the Palestinian response will be in proportion to the aggression,” said Fatah spokesperson Munir Jaghoub.

Israeli activists protested Thursday’s shooting attack by blocking Route 60, the road on which the attack occurred. Other activists also were filmed throwing rocks at Palestinian cars. Settler leaders called for the closing of West Bank roads to Palestinian traffic in response to the recent attacks.

Early on Thursday morning two Israel Border Police officers were injured in a stabbing attack in the Old City of Jerusalem near the Damascus Gate.

The assailant, identified in Palestinian media as a 26-year-old resident of the Qalandiyah refugee camp near Jerusalem, was shot and killed by other officers at the site of the attack. He is seen on surveillance video first trying to stab a civilian in the area.

Meanwhile, the Palestinian man suspected of killing two Jewish-Israeli co-workers at a factory in the Barkan industrial zone in the West Bank was killed in a shootout with Israeli forces who came to arrest him.

Ashraf Naalwa, 23, was killed early Thursday morning after Israeli forces surrounded his hideout. He was armed when security forces came to his hideout, the Israel Security Agency said in a statement about his apprehension and death. From several other suspects already captured who had aided Naalwa, the ISA, also known as the Shin Bet Security Serves, had learned that Naalwa was planning to soon carry out a new terror attack, which was thwarted with his arrest and death.

In the attack on Oct. 7, Naalwa shot and killed Kim Levengrond Yehezkel, 29, and a mother of one from Rosh Haayin, and Ziv Hajbi, a 35-year-old father of three from Rishon Lezion. Both had been tied up and shot at close range.

Naalwa lived in the village of Shweika, near the West Bank city of Tulkarem, and had a permit to enter the Barkan settlement for work, but it is not known how he was able to bring the weapon into the industrial zone.

It was reported to be the first of its kind in the Barkan Industrial Park, which is home to 160 factories that employ thousands of Israelis and Palestinians.

Late on Wednesday night Israeli security forces shot and killed the son of a West Bank Hamas leader suspected of involvement in Sunday’s  shooting attack outside of the West Bank settlement of Ofra. Four other Palestinian men alleged to have been involved in the attack also were arrested in the operation late on Wednesday night.

The killed man is Saleh Barghouti. He was shot and killed after firing on Israeli troops while trying to evade arrest. Several of the men reportedly were hiding out in a building in Ramallah located near the Muqata, the seat of the government of the Palestinian Authority.

Israeli Prime Minister Benjamin Netanyahu during an event at the Defense Department headquarters in Tel Aviv, commented on the recent violence.

“Last night we settled accounts with the murderers from the terrorist attacks in the Barkan Industrial Zone and Ofra and today we suffered a harsh attack in which two soldiers were killed. We will settle accounts with whoever did this. Our guiding principle is that whoever attacks us and whoever tries to attack us – will pay with his life. Our enemies know this and we will find them,” he said.